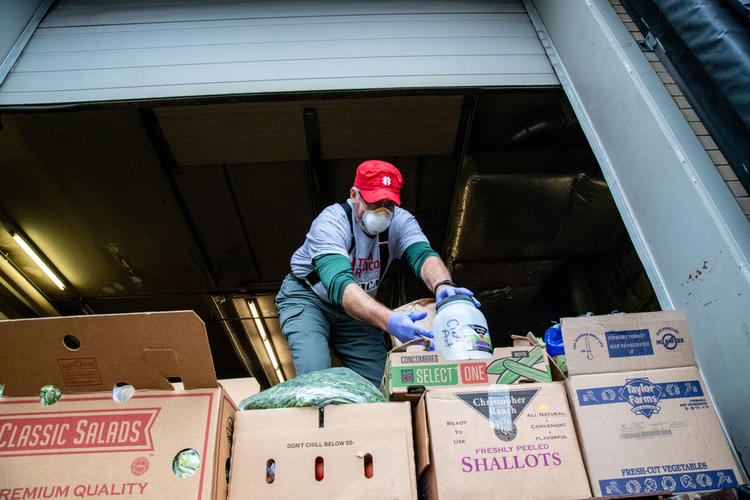 ( Otherwords.org ) – Tens of millions of us are out of work. Why on earth is Trump trying to cut food aid?

In some ways, this horrible pandemic has brought out the best in humanity.

Where I live, neighbors are helping neighbors. A friend who cleans houses for a living says about half of her clients are no longer having their homes cleaned, but they are still paying her. I hate what’s happening right now, but I love that so many of us are helping each other.

And then there’s the Trump administration, which appears to be taking things the other way.

Before the pandemic, Trump wanted to cut people off the Supplemental Nutrition Assistance Program — also known as SNAP, or food stamps. And during the pandemic, he still does.

In case you hadn’t noticed, 100,000 Americans are dead. More than 36 million lost their jobs. I’m spending an extra year in school because employers have hiring freezes, and I’m afraid that when I graduate with more than $100,000 in student loan debt, it won’t be much better.

People who argue against the social safety net complain about free riders. If everyone could just get freebies from the government, why would they work?

Having been on food stamps myself, that’s nonsense. As a single person, I’d have to make less than $1,276 per month in order to qualify. That’s an income of $15,312 per year. When I qualified, about seven years ago, I got $70 per month in benefits.

No rational person would choose to earn less than $15,312 a year to get $70 of free food each month. Nobody. You do the math.

Right now, especially, we are in an extraordinary time. Millions of Americans have lost their jobs due to the pandemic, and millions more have to risk their health in order to work because they can’t afford not to.

Families still need to pay rent, pay mortgages and other loans, buy food, and so on. The choices the government makes now will not just affect who lives and who dies. They will also affect how quickly we are able to recover.

Trump has talked about prioritizing the economy from the beginning. The economy is made up of people. Our economy is the aggregate of all of us working, earning money, and paying for what we need to live. When consumers and businesses falter, it’s up to the government to do what’s needed to keep the economy from going off the rails.

Put another way: now is not the time to cut food stamps.

Helping out people at the bottom is good for two reasons: first, because they need help the most. And second, because they will spend the money they receive and put it right back into the economy.

Every five dollars spent on food stamps generates $9 in economic activity. When families buy food at grocery stores, their money is distributed throughout the entire supply chain — to farmers, processors, distributors, truckers, warehouses, marketers, and the grocery store itself.

Food stamps are not just a matter of compassion, though compassion is more important than ever right now. They’re also smart economic policy.

It’s not that the government is not spending. They’ve given massive handouts to large corporations and wealthy individuals. Why do we have enough money to give handouts to billionaires but we can’t help hungry people eat?