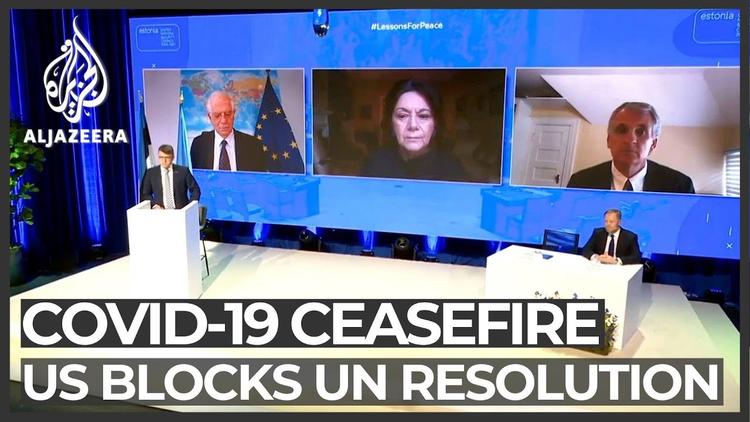 Ann Arbor (Informed Comment) – Under Trump, America has officially become the world’s crazy uncle Sam. On Friday, the US used its veto power to block a United Nations resolution calling for a global ceasefire during the coronavirus pandemic. The resolution had been called for by UN Secretary-General Antonio Guterres.

The move left all the other countries in the world shaking their heads in disbelief at the pettiness and unhinged character of American diplomacy under Trump.

Adversaries of the US like Iran trumpeted that Washington had “broken its promises again” by casting the veto. There is actually a price to be paid in international diplomacy by looking flaky. And it is a way to lose a lot of soft power.

The US at the United Nations is now like that relative who comes over at Thanksgiving and keeps talking about how the Trident conspiracy is trying to force bitcoins down our throats, then gets in a loud argument with everyone else about how he’d never have anything to do with tulips because actually their pollen is poisonous.

The stated reason for the US withdrawal was that the resolution mentioned, at Chinese insistence, the work being done by the World Health Organization, from which Trump withdrew US funding in a snit. France even tried to humor the insane Americans by recasting the text merely to refer to the UN’s “specialized health agencies.” But the Trump administration still vetoed it.

Meanwhile, Russia had wanted language calling for partial lifting of sanctions to permit the delivery of medicine and medical supplies during the pandemic, which was aimed at helping Iran and Venezuela. But no one thought Russia would have vetoed the measure if the passage was omitted. And although Trump says he is is sending medical aid to Iran, the Iranians say they haven’t seen an iota of it.

Typically during a global pandemic, you would want a functioning, indeed, robust World Health Organization. Maybe it made mistakes, but it is the best placed UN agency to coordinate the current campaign to limit and roll back the novel coronavirus worldwide. Instead, Trump tried to kneecap it for reasons that aren’t entirely clear. The US Republican Party in general hates multilateral institutions because the party represents a few hundred US-based billionaires who don’t like having their money-making schemes interfered with by global health priorities like fighting climate change or even like convincing the world’s people not to smoke. The late US senator Jesse Helms even once punished Thailand for trying to stop advertisements for Camel cigarettes from being placed in children’s workbooks. Being rich and corrupt means never having to say you are sorry.

But even this feel-good resolution, which if it did no good at least did no harm, was too much for the Trump administration. Acting US ambassador to the UN Kelly Craft (why are all of Trump’s officials “acting”?) did not even veto the resolution because it called for an end to hostilities. It was only because it mentioned the work the UN is doing world-wide to fight the coronavirus threat. In contrast, Craft herself is married to Big Coal, which is decidedly bad for the health of the people of the world.

And the UN resolution has a point. It is crazy to go on fighting wars during a pandemic, since wars weaken public health and help spread the disease around. And the disease will attack both warring adversaries.

It isn’t all that promising a list on the face of it. The Cameroons, now a country of 25 million, was a German colony in western Africa until WW I, when the French and the British took it over jointly, each ruling their own zone. So there are French-speaking Cameroonians and English-speaking Cameroonians. The French-speakers are the elite and have been attempting to expand French schooling in the English areas, which has led to a secessionist movement among the English-speakers, whose children are menaced with the horrors of the French pluperfect subjunctive (eusse, really?). You wish they could just use their African language, but there are 250 of those, which would threaten 250 secessionist movements. Although one faction did declare a Guterres cease-fire in late March, the government did not join in, and there appear to be 14 other secessionist factions determined to fight on.

The war between eastern warlord Gen. Khalifa Haftar and the internationally-recognized government in Libya continues unabated, with heavy bombardment Sunday of an airport at Tripoli by Haftar’s forces.

Syria is simmering, though the big campaign of Damascus and Moscow to subdue the fundamentalist rebels in Idlib province has cooled down.

I think the real effect of a UN cease-fire resolution would be to give warring parties who already wanted a ceasefire for other reasons a fig leaf whereby they could decently step back without losing face.

In fact, Saudi Arabia declared a truce in its fruitless, costly, lost Yemen war. This makes sense not only because a massive outbreak in Yemen would certainly spread up to Saudi Arabia but also because oil prices cratered and Saudi Arabia is suddenly way over budget and can’t afford to be dropping expensive munitions any more. It isn’t actually much of a ceasefire and the real reasons for it may not be related to Covid-19, but it is marginally better than nothing.

But a formal UN Security Council resolution explicitly calling for a global coronavirus ceasefire will have to wait until Trump and Kelly Craft get over their snit about the World Health Organization.