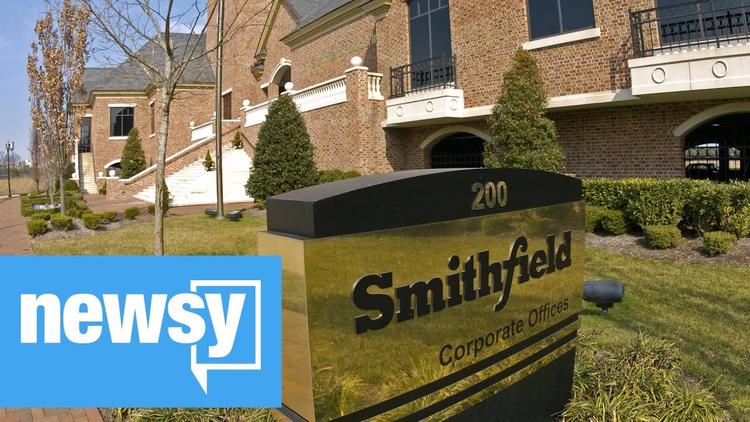 Southwest Harbor, Me. (Special to Informed Comment) – Should we be surprised that Smithfield[s pork processing plant in Sioux Falls, South Dakota was a hotspot for the Covid19 virus? No, and here is another no brainer. There are many such hotspots among meat processing plants around the US. How we handle such facts will affect not only the health of these workers but of our meat supply as well. And struggles over this industry will play a key role in determining the shape of the economic order that emerges from the crisis. Corporate elites aim to insure that when this political economy emerges from the Covid19 crisis workers’ survival will still depend on complete adherence to the demands of their employers. In behalf of this cause the industry has recruited not only the President but also governors of states most heavily impacted by meat processing and even the agency created to protect the physical and mental health of workers in the workplace.

Politico reported: “Meatpacking plants have become incubators for the virus as employees work side-by-side in dangerous conditions. Twenty meatpacking and processing workers have died from coronavirus, and at least 6,500 have been affected, according to the United Food and Commercial Workers International Union.

At least 22 plants processing meat from pork to chicken have closed at some point after clusters of employees tested positive for Covid-19, according to UFCW. Trump is using the Defense Production Act to order the companies to stay open.

Just why Trump has gone to such extents to keep meat processing plants open while evading similar actions for vital medical supplies is a question for which I can only speculate. My view is that in his mind part of normalcy for his base are the summer and fall barbecues and football tailgating. In addition Trump is more than willing to sacrifice the predominantly minority, many undocumented workers to assure the meat supply.

Meat packing, US corporate style, is an extraordinarily dangerous occupation with injury rates two and one half times the average for manufacturing as a whole. Profitability in the industry is a function of the speed of the assembly line, a recipe for continual accidents.

Trump’s response to a workplace that was always dangerous was merely to seek Congressional action to free the corporations from any liability claims in the event of future injuries during this pandemic crisis. A more subtle response to the complaints about worker safety was the President’s request that Agriculture Secretary Sonny Perdue to “take all appropriate action” to ensure that meat companies continue operating under guidance from the Centers for Disease Control and Prevention and the Occupational Safety and Health Administration.

That might sound like a step in the right direction, but OSHA itself has become little more than a publicity arm of the industries it is charged with regulating.

The order did not detail additional precautions companies should take to protect workers, which Politico reports “has led to worries among unions and other worker groups.” OSHA is worse than Politico recognizes. In conflicts with unions and public safety advocates it has generally endorsed the same sort of self-monitoring procedures that crashed Boeing. What actions it does undertake it labels as suggestions, with no enforcement actions specified. The agency itself has been decimated during the Trump years, with fewer than one thousand inspectors for the entire nation.

As more meat processing facilities become exposed as hotspots the political divides are likely to become more intense. Rural states, where many of these plants are located, could be the epicenter of major conflicts over the control and direction of the food supply chain. Governors of Nebraska and Iowa have announced their intention to use state unemployment insurance funds not as safety nets for the voluntary unemployed but as cudgels to force workers to return to plants where health issues are still not fully resolved. Workers who reject a job offer out of fear of injury will be deemed ineligible for unemployment compensation.

It is likely that a safe and sustainable meat industry would require more than standing a few feet apart. And design of such a system needs more than just regulation from the top down. It requires participation of the workers who give their lives and health And since meat involves other serious health issues consumer and environmental organizations should be brought into the process. Long before Covid-19 meat has been a major source of serious illness and has prompted growing concerns about the overuse of antibiotics and possible emergence of a superbug.

Common Dreams reports: “Nebraska-based Organization for Competitive Markets (OCM), says the current system in which four companies—Cargill, JBS, National Beef, and Tyson—control more than 80% of the nation’s beef supply must be overhauled.

“What the COVID-19 pandemic response has shown us is that the biggest links in our food supply chain are the weakest,” Ben Gotschall, interim executive director of OCM, in a statement Thursday.

“In the interest of our economic, food, and national security,” he continued, “the United States needs to remove these weak links by breaking up the Big Four meatpackers .. the goal should be “a system based on fair, transparent, and competitive markets so that we can have more farmers and ranchers on the land, producing food with more value in more places.” Gotschall properly views anti- trust law as potentially playing the lead role .I would add that tax policy and the state university agricultural schools, both of which favor large- scale agribusiness, play key roles.

I would also pose two other related considerations. Fair competitive product markets do not guarantee economic or racial justice within the workplace. Toward this end the right to organize, to strike, and the right to refuse dangerous or sexually exploitative jobs as well as genuine safety nets (universal healthcare, sick pay and job guarantees) are just as important for food sector workers as for other industrial sectors. Finally OSHA must be more than a cheerleader for the industry by researching, articulating, and enforcing best practices.//

What happens in Sioux Falls has a catastrophic effect on the poor, predominantly immigrant and minority workers. Even .the wealthiest among us, however, are not fully insulated. Sick workers forced to come to work spread illness that can eventually infect anyone. Middle class citizens who never imagined they would be unemployed now wonder when and if they will return to work. They may be less inclined to view poverty and unemployment as moral failings. They also may appreciate the sacrifices and risks involved in the food they once took for granted. Covid-19 is an opportunity to build coalitions across ethnic class, gender, and regional lines on behalf of a safer, more resilient, and equitable food supply chain.