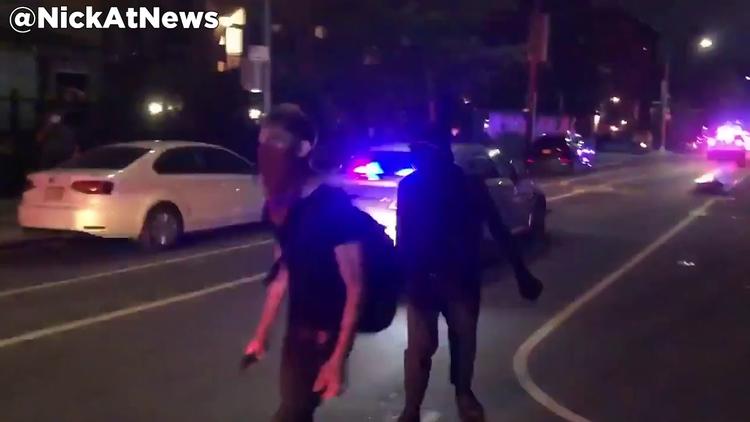 Chicago (Special to Informed Comment) – On October 9th, 2011, Egyptian army vehicles plowed into a Coptic Christian protest outside of the Maspero state television building in the capital city of Cairo, killing more than two dozen peaceful demonstrators. Less than a year after the Arab Spring came to Cairo and dislodged the country’s longtime authoritarian ruler in a spasm of hopeful protest and national unity, the Maspero Massacre, as it came to be known, was a depressing early sign that the revolution had sputtered out far short of its goals. More ominously, the willingness of the state to use lethal force against demonstrators meant that the country’s real rulers – the armed forces – had abandoned their brief pretense of being on the side of the people and felt confident enough in their long-term position to resume killing innocents with impunity.

Embed from Getty Images
Egyptian protesters hold portraits of members of the former military council as they march in Cairo on October 9, 2012 to mark one year since nearly 30 demonstrators were killed in a Coptic Christian demonstration (KHALED DESOUKI/AFP/GettyImages).

I haven’t been to Egypt in almost a decade, but I thought of those heady revolutionary days in Cairo as I sat in my Chicago basement this past week, three months into a seemingly endless disruption of normal life from the COVID-19 crisis, and watched video after video of metropolitan police forces across America unleashing unprovoked or wildly disproportionate violence on protestors at the behest of America’s deranged tormentor, a pitiful figure whose racist venality is matched only by his staggering ineptitude. It felt like witnessing the second stage of an uprising, the part where regime hardliners win the day and convince the generals to start shooting.

It’s all horrible. The senseless mayhem. The chilling sociopathy of state-sanctioned killers relishing the opportunity to crack heads and spill blood. The feeling that something is unraveling and no one knows how to stop it, and no one is coming to save us. Not knowing whether the black-shirt-clad meatheads are protestors or baltageya, undercover provocateurs posing as ordinary demonstrators. Not being able to envision an end to any of it. Knowing that 40% of your fellow citizens couldn’t care less if cops murdered unarmed civilians like George Floyd every day for sport.

If you’ve spent time living in an authoritarian country, you know exactly what I mean. As long as you’re in a democracy, you have a sense that there is a net beneath you, that you can only fall so far. You can call a lawyer. You can’t just be disappeared. In a dictatorship, you know that arbitrary coercion can be deployed against you at any minute. They can murder you on live television and there’s nothing you can do about it. What today’s African American protestors are telling us, in addition to the simple fact that they’ve had enough, is that for them it has always been like this. To be black in America is to exist in a bubble of tyranny inside something that everyone else calls a democracy.

The aftermath of George Floyd’s murder has afforded the rest of us an extended look at what that despotism looks and feels like in practice. Millions of Americans already traumatized by three months of a brutal, isolating, terrifying pandemic have little else to do right now but look on in horror. And what we are seeing on the streets of American cities this week is the naked logic of tyranny, the use of violence unbound from law or decency, the police everywhere seeming determined not to prevent mayhem but to stoke it, not to keep the peace but to obliterate it forever. For liberals accustomed to revering their precious urban oases and looking the other way at the many injustices that surround them every day, the behavior of the police is finally opening eyes. Cops are attacking everyone – protestors, journalists, bystanders, old men with canes.

Why are they doing this? Step back from the partisan passions of the moment, from the horserace polls and the VP speculation, from the permanent campaign. Put the particular grievances of the protestors and the identity of the looters out of your minds for a moment. Forget the additional layer of horror and suffering that the virus has inflicted on us, and ask yourself a simple question. Why would police officers across the country feel empowered to attempt vehicular homicide and other acts of blatant escalation against protestors when they know that a thousand people are filming their every move?

For starters, they have a well-earned sense of impunity. They’ll get away with it, or most of them will, and the ones who don’t will get off with a smack on the wrist. This too is authoritarian logic, placing those enforcing the state’s monopoly on violence above any conceivable accountability. This is nothing new here but it is startling to see it happening in dozens of cities at once, and the absurdity of it all in a country in love with its own false sense of equality and justice is being laid bare for all to process.

But there’s something deeper transpiring in the United States, a worrisome fusion of interests between the Republican Party and its carceral state allies. Cops, immigration enforcers, border patrol agents and seemingly even senior figures in the military have converged, dangerously, on the idea that the Democratic Party is illegitimate, that any attempt to rein in the excesses of law enforcement is capitulation to anarchy. Many of them are drunk on paranoid, white supremacist agitprop or the demented philosophy that law enforcement officers are “sheepdogs” keeping the wolves at bay, and they have been whipped into a frothy rage by the President of the United States, who has repeatedly invited police to engage in brutality. And here they are, taking him up on his offer for all to see. The Chairman of the Joint Chiefs of Staff roaming D.C. at night in his battle fatigues like some post-invasion viceroy was one of the most chilling things I’ve ever seen in this country.

It is hard to shake the feeling that these people, who can clearly murder me or you or anyone they please with near-total freedom, see themselves as an occupying army sent to pacify recalcitrant natives. Even America’s biggest, bluest cities are patrolled by cops who mostly hate the citizens they are meant to be protecting and live as far apart from them as the law allows. They are prison guards, and to them we’re the incarcerated. It’s a siege-state mentality, worsened by decades of austerity that have left millions close to destitution and have dramatically worsened inequality in precisely the places most likely to erupt in chaos.

By openly taking the side of injustice, oppression and violence, law enforcement has forfeited its unearned place as one of the last trusted institutions in America. Why are protestors getting brain bleeds from rubber bullets and looters are allowed to roam freely? Why are armed white irregulars patrolling the streets with the permission of police while peaceful protestors get gassed and crushed underfoot? This is what happens when the logic of authoritarianism is adopted deep inside institutions that ostensibly exist to safeguard us. When you view peaceful, or even rowdy, protestors as the enemy, when you decide that you are willing to run them over and drive away, what it means is that you regard your fate as inextricably linked to the regime in power. You wrap yourself even more tightly to the fate of the corrupt rulers, because you know that their downfall is your downfall. That is why for a short period in early 2011 the Egyptian armed forces abandoned the dictatorship of Hosni Mubarak, precipitated his ouster and then eventually installed General Abdel Fattah al-Sisi in his place. They couldn’t continue playing their long game of corruption and abuse if they were seen by the public as having crushed the revolutionaries directly themselves.

To the American security services, our very own amn el-dowla (what else to call these lawless instigators?) President Trump is not just another executive, to be swapped out in five months or four years for someone else to serve. He is their General Sisi. Without him, they might have to face some kind of reckoning for their reckless, callous abuse of American citizens. The gentle pushback from the Obama Department of Justice spurred not a reappraisal of tactics or a thoughtful reexamination of relations between police and the communities they serve, but rather a desperate, reactionary alliance with Trump’s Republican Party.

Law enforcement and the Republican Party, to borrow another idea from the Arab Spring, are now one hand. To change, to adapt, is to die. Their marching orders are to destroy, to throw kindling on the bonfires of rage burning in our cities and to turn enough voters against the cause of racial justice to throw the election to Trump.

In purely political terms, this has so far been a grave miscalculation – the president’s polling continues to crater, and broad majorities of the public believe George Floyd was murdered, that the protestors have legitimate grievances that must be met and that the president is badly mishandling the problem. President Trump, who really is incapable of getting out of his own way, has humiliated himself by alternating incendiary rhetoric with magnificent acts of cowardice, most recently when he ordered his goons to teargas peaceful protestors so that he could march his useless self across the street to hold a bizarre photo op at a church. I pity whoever is running comms for that operation because the dude is literally unreachable. Every time he opens his mouth he alienates another independent voter and further imperils his re-election.

Yet the specter of democratic collapse cannot be dismissed. Many casual comparisons to the Middle East – that our cities are “like Baghdad now” or that anything is as bad as it is in Egypt –are both stupid and racist. And there are important contextual and institutional differences between the United States and your average regional dictatorship.

But to note that democracy has not yet ended here should not give us any confidence that it won’t. And identifying the points where Trumpism is being fused with people and organizations capable of destroying democracy is one of the critical ways that comparative political scientists can help Americans understand the nature of the danger. Egypt is important here not because we are on the verge of plunging into full-on autocracy but because the country’s politics provide a glimpse into the shape of things if internal and external security forces fall completely into the hands of the GOP in the coming years. Right now it feels like they are testing the waters. How many innocent people can we terrorize and kill with impunity? Can we push frightened citizens back into their houses and force them to submit our power? If it works now, could we try it again closer to the election?

Today, they test the waters. Tomorrow, they could plunge us all to the depths together. And we have five months to make sure that it doesn’t happen.

WGN News: “Protests continue on North Side as citywide curfew in effect”