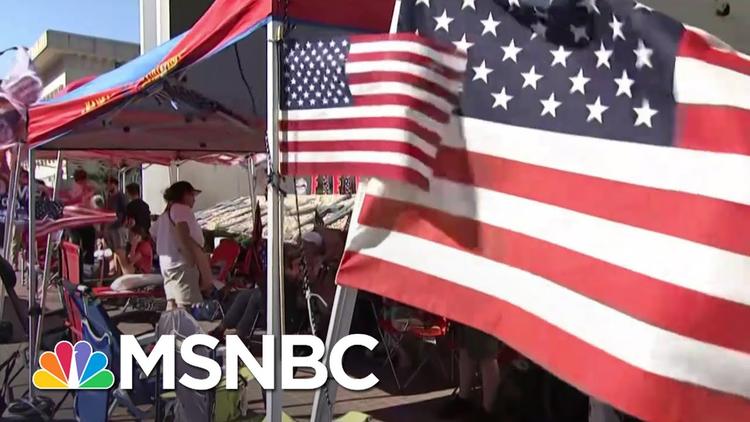 Ann Arbor (Informed Comment) – Scientists know the story of Typhoid Mary, an immigrant from Ireland to the US in the late 19th century. She had typhoid, but refused to admit it, and was hired as a maid, and by 1907 some 3,000 New Yorkers had typhoid, and she was the super-spreader. Typhoid Mary rejected the notion, not being big on science.

Trump is our very own 2020 typhoid Mary.

When asked about his rally in Tulsa on Saturday, at a stadium that holds 19,000 and the grounds of which could host another 80,000 visitors, Trump demeaned the 700 deaths a day in the US from the novel coronavirus as “miniscule.” Just as he did in January and February when he declined to take decisive steps against the pandemic, he insisted that the virus is “dying out.” He also said that he thought people were wearing masks to show that they did not like him, Trump. The latter is a signal to his base to avoid masks and to keep up the appearance of normality, which he thinks will help his reelection bid.

Unfortunately, the refusal to wear masks will kill large numbers of Americans. Hong Kong, where mask-wearing is universal, has had 4 coronavirus deaths. New Zealand’s government managed to get rid of the coronavirus entirely.

The braindead Oklahoma Supreme Court ruled that rally attendees do not have to wear masks or practice social distancing, and the Trump campaign had made them optional.

Dr. Anthony Fauci and Dr. Deborah Birx, members of the alleged Trump coronavirus task force, lobbied Trump against the Tulsa rally. Fauci himself was asked if he would go to such an event and his answer was basically, “are you ca-raazy?”

Fauci lamented that many Americans have an anti-science attitude, which makes dealing with the pandemic difficult. Arguably, that anti-science attitude has killed 50,000 people (see below), with many more on the way. And the disastrous US response to the pandemic tells us how catastrophic our response to the climate emergency will also be. Me, I don’t get it. You jump off a skyscraper, you will be bugsplat. Always. Science has laws, and we can’t change them by glaring at them or shouting at them or wearing a partisan campaign button. You sit close to someone for hours without a mask, who has the disease and is screaming, you almost certainly will sicken, and you might die.

The virus is most effectively spread by infected people expelling it in droplets from their mouths. More droplets are spread when a person is chanting and shouting than just breathing. A victim is more likely to be given the virus if they breath in a big load of it, which happens if they are less than six feet away from the infected person, are with the infected person for a long time and if that person is spraying saliva at them by shouting campaign slogans. This viral load not only helps determine if you get sick, but also how sick you get.

In a closely packed crowd of 19,000, shouting for four hours straight, the likelihood is that some 800 to 1000 people could be infected by just 20 people who have the disease (and it may not show). The newly sick in turn could infect 3,000 others in the next days, and then that would become 9,000 and 27,000 if the rate of transmission were 3, and after a while you have a big outbreak.

Trump is planning another huge rally at an Arizona megachurch next week. Arizona had over 3,000 new cases just on Thursday and its number of sick is ticking up.

Chris Casteel at the Oklahoman points out that Tulsa County has the worst outbreak in the state, with numbers rising. The rally will certainly worsen that situation, and possibly worsen it considerably. Some 54% of the new cases in Oklahoma have been people 35 and younger, putting the lie to the notion that the young are somehow immune. There has also been an 11% rise in elderly victims. Covid-19 survivors can suffer lifetime damage to lungs, kidneys and other organs.

Oklahoma public health officials are afraid that the enormous rally will spread the disease, as attendees disperse and as some of them visit relatives in nursing homes in the coming weeks (visits are being allowed again by state authorities).

If the death rate holds steady, in only 5 months another 100,000 Americans will die of Covid-19, on top the the nearly 120,000 already killed. Specialists believe that if Trump had locked down the country two weeks earlier, in late February instead of late March, some 40% of the deaths to date could have been prevented, which is to say, that Trump is personally responsible for the deaths of nearly 50,000 Americans, already.

That’s about how many Americans the Nazis killed at Normandy and the Battle of the Bulge, combined.

The likelihood is, however, that the death rate will go back up. It was 960 a day in the first week of June.

Alarmingly, on Thursday alone new cases surged to 27,700 , and the one-week average grew by 15% over the previous week. In early June on some days there were less than 20,000 new cases nation-wide, but the trendlines are now going in the wrong direction (i.e., up).

The increased cases are a result of Memorial Day gatherings and early openings of states like Florida and Texas, the governors of which were doing Trump’s bidding.