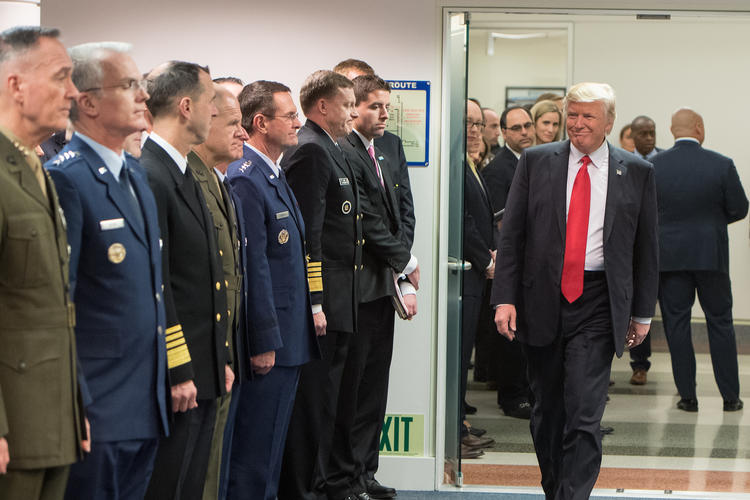 Over-funding police has terrorized people of color and left communities less secure. Can the same not be said of the Pentagon?

(Foreign Policy in Focus) – When Congresswoman Barbara Lee (D-CA) introduced a resolution recently to cut $350 billion from the Defense budget, the only media outlets that covered her bill were independent progressive ones.

In a statement on her website Lee said, “For years, our government has failed to invest in programs that actually keep our country safe and healthy. The prioritization of defense spending and the underinvestment in public health has led to 10 times more deaths from COVID-19 than the wars in Iraq and Afghanistan.”

Corporate news outlets such as CNN or the New York Times, which have been extensively covering the national uprising against police brutality, simply ignored this story — just as they ignored police brutality for so long — and failed to connect Lee’s idea to slash the military budget to the prevailing demand to “Defund the Police.”

But the analogies between our domestic law enforcement and our military are glaringly obvious. Just as cities around the country have diverted obscene percentages of their budget into keeping their local police departments flush with cash while starving school districts and public services, the federal government has poured ever-increasing amounts of our tax dollars into the Pentagon.

When President Donald Trump came to power, one of his first announcements was to demand cuts to education, environmental programs, scientific research, and other social services that benefit Americans — and divert $54 billion more into the already-bloated U.S. military budget. By 2018, Trump had succeeded in increasing the military budget by $165 billion over two years with both parties in Congress eager to throw even more money into the United States’ war-fighting machine than the president had asked for.

The funding was so ridiculous that by the end of 2018, the military was scrambling to spend all of its money.

When the coronavirus pandemic hit earlier this year, the consequences of years of military spending at the expense of social spending became staggeringly apparent. All the talk of military readiness as justification for appropriating hundreds of billions of tax dollars meant nothing in the face of an invisible virus. Our military may have been ready for a traditional invasion, but our nation was woefully unprepared for a pandemic (earlier administrations had foreseen such a scenario and been better prepared than the Trump administration).

Today, with tens of millions of unemployed Americans, many of them now without health care, unable to pay rent, barely helped by the $1,200 stimulus checks that Congress and Trump approved, the consequences of overfunding the U.S. military and overfunding police departments have come home to roost.

The United States may have the best military in the world, but it also has the highest number of coronavirus infections and deaths, and a health care system that is frighteningly unprepared to cope with the crisis

The contrast was so outrageous that even a fashion magazine pointed out how “One Police Officer’s Riot Gear Could’ve Bought PPE for 31 Nurses,” and wryly commented, “When it comes to spending, the U.S. has made its priorities clear.”

When George Floyd’s killing at the hands of Minneapolis police sparked a massive national uprising against racist police violence, the overfunding of police departments became starkly obvious to Americans.

Not only did cities increase their reliance on well-armed and unaccountable law enforcement officers for all manner of emergencies, but they also deployed what amounted to a domestic army against the very people whose taxes pay for police. Scenes of violence from city after city have shocked Americans about the brutality that police casually inflicted upon unarmed Americans, leaving death and serious injuries in their wake. Nearly 100 cities used tear gas—banned by the Chemical Weapons Convention—against protesters.

The overfunding of both police and military collided in the worst way on the streets of Washington, D.C., when Trump brought in the armed forces to supplement local law enforcement against peaceful protesters, and Senator Tom Cotton made a call, amplified by the New York Times (in a move the paper now regrets) to “Send in the Troops.”

Every month, working Americans watch as a chunk of their paychecks is diverted to state and federal treasuries, and once a year Americans dutifully fill out tax forms and reconcile their tax bills. It is the American citizenry that provides the dollars to outfit the U.S. military and local police departments with weapons of war and pay the salaries of troops and officers. That same population lives hand-to-mouth in a nation with no universal health care system and with poorly funded school districts, whose nurses and teachers are constantly desperate for resources while soldiers and police officers enjoy expensive equipment.

As we rightly demand that cities defund their police departments and divert that funding into social services, shouldn’t we also make a similar demand to defund the U.S. military and divert its funding into federal programs that actually help Americans?

Perhaps the reluctance to take on military spending comes from a misplaced sense of nationalism, stoked for years by pro-military propaganda that equates love of country with love of the military. After all, when the pandemic first hit the United States, bringing with it a wave of despair, a bizarre show of military strength in the form of fighter jets saluting health care workers was supposed to comfort us.

Few Americans saw the gesture as a symbol of misplaced priorities. The U.S. military is so well-funded that it could afford to waste time, effort, energy, and equipment to distract terrified Americans from the mass deaths that were projected. But that hideous death toll (that is well on its way to fulfilling the grim predictions) is directly a result of our misplaced priorities in shoveling more and more money into the military. Yet there was hardly a peep of opposition to the brazen display.

Just as policing in America has historically targeted people of color and continues to do so, the U.S. military has historically been used to wage war on non-white nations, and continues to do so from Vietnam to Iraq. Both forces are instruments of control, domination, violence, and destruction, and both are overfunded at the expense of programs that nurture, heal, educate, and increase equity.

For years, Americans placed great faith in law enforcement (more so white Americans than black Americans). Pro-police propaganda in the form of TV shows like (the now canceled) “Cops” has been widely popular. But just as opinions dramatically shifted on police in a matter of weeks, the same can happen with the U.S. military. Indeed, there are already conversations around our definition of “national security” and how our overreliance on the military left us unprepared for the pandemic.

Just as Black Lives Matter activists put forward what they called “People’s Budgets” that prioritize public services over policing, activist groups like the Poor People’s Campaign have put forward a “Moral Budget” that diverts funding from the military toward constructive services such as education and clean water. From the city level to the federal government, the analogy between defunding the police and defunding the military is apparent — if we are willing to see it.

This article was produced by Economy for All, a project of the Independent Media Institute.

Sonali Kolhatkar is the host and producer of Uprising, a popular, daily, drive-time program on KPFK, Pacifica Radio in Los Angeles.