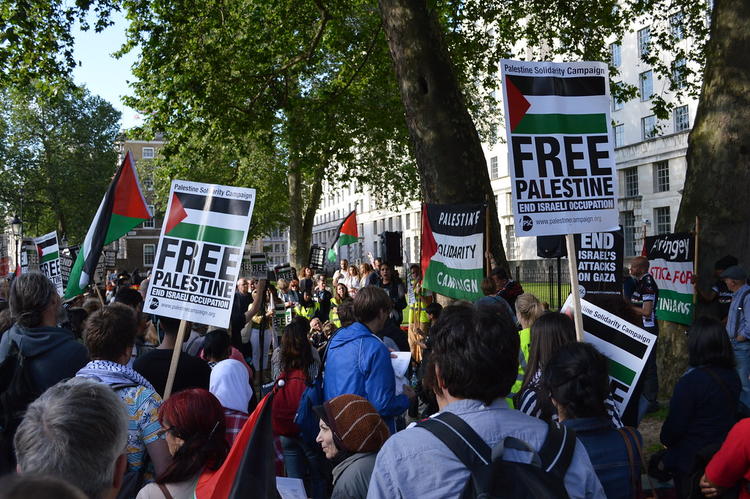 ( Middle East Monitor) – The boycott, divestment and sanctions movement (BDS) had a landmark legal victory against Israel last week. The European Court of Human Rights ruled unanimously against the convictions of Palestinian-rights campaigners by French courts for BDS protests they staged more than a decade ago.

In September 2009 and May 2010, the group of 11 activists entered a supermarket in Illzach, a town in north-east France, wearing t-shirts bearing the words “Boycott Israel”. They chanted slogans and passed out flyers urging shoppers not to buy Israeli goods, and also asked them to sign a petition requesting the supermarket chain to stop stocking such products altogether. Their actions were entirely peaceful, so much so that the company did not even file any legal charges against them.

However, the public prosecutor took a different view and launched a case against the activists, claiming that they had incited “hatred or discrimination” by calling for a boycott of Israel. This was, of course, entirely spurious. And entirely political, because France’s Minister of Justice had ordered local prosecutors to go after BDS activists. They were sentenced in French courts to pay punitive fines and costs. It was an object lesson in “justice” against the “crime” of standing up for equality and human rights.

Now, after a long legal struggle, the French BDS activists have been vindicated completely. The tables have been turned, and France has been ordered to pay each of the activists about €7,000 in damages, plus their legal costs.

The European Court of Justice ruled that, “The actions and remarks imputed to the applicants had concerned a subject of public interest” and that “those actions and words had fallen within the ambit of political or militant expression.” In French, the word “militant” just means “activist”, not any kind of extremist or forceful action as the word can imply in English.

The court in Strasbourg faulted the French national courts for failing to respect Article 10 of the European Convention on Human Rights – the guarantee of freedom of expression – and not carrying out “an appropriate assessment of the facts”. A boycott is, after all, a form of free speech.

This was a landmark ruling. It is a significant, crushing defeat for the pro-Israel lobby, because for several years now, one of Israel’s primary strategies against the BDS movement has been to persuade, pressure and cajole Western governments to pass laws banning or severely restricting BDS activities. Numerous US states, as well as France and Germany, now have legislation on the books which curtails, restricts or punishes BDS activism.

Politicians passing laws through the legislature is one thing, but they have to be tested in the courts. It is likely, therefore, that anti-BDS laws will eventually be ruled unconstitutional, overturned and probably struck off the statute book. This is especially so in the US, where such laws are clearly in violation of the First Amendment of the Constitution, which upholds the right to free speech. This ruling by the European Court of Human Rights is a significant step in that direction.

Israel is running out of options in its war against BDS. As Dr Martin Luther King once said, “The arc of the moral universe is long, but it bends towards justice.” This doesn’t mean that justice is inevitable; far from it. It is up to us, the people, to bend it ourselves by our collective actions.

That is why the BDS movement has been so successful, and why Israel is so worried about it that it has created an entire ministry to fight a dirty war against the movement around the world. The so-called Ministry of Strategic Affairs is, in reality, a semi-covert spying and sabotage agency.

Companies which profit from Israeli apartheid are also worried. Palestine’s BDS National Committee revealed recently that one of their activists was told by a lawyer for the Puma sportswear company, “You’re making our lives miserable.”

Puma has been a key BDS target in recent years. As the main sponsor of the Israel Football Association (IFA), the company is complicit in Israel’s brutal military occupation, theft and colonisation of Palestinian land. The IFA ignores its own claim to promote “non-political” sports by including teams based and playing in Israel’s settlements in the occupied West Bank. All Israeli settlements are illegal under international law and constitute a war crime.

The long campaign against Israeli occupation, apartheid and expulsion requires stamina; we will win, but it will require tenacity. The BDS movement is the key for supporters of Palestinian rights who want to campaign against Israeli violations of those rights. Anyone and everyone with a sense of justice has to keep on making the lives of the war criminals and profiteers “miserable” so that it is they who give up, and BDS achieves its objectives.