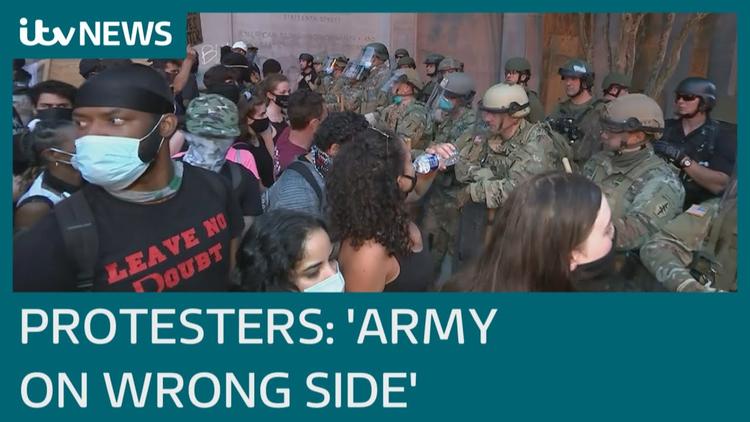 Southwest Harbor, Me. (Special to Informed Comment) – The pandemic has exposed more than just the inequities and vulnerabilities of our political economy. It has also exposed the deceit and hypocrisy in conservatives‘ periodic invocation of one of our nation’s most sacred constitutional principle, states’ rights. As we all learned in civics class, the US has a federal system, most decisively elaborated in the Tenth Amendment to the US Constitution:

The Tenth Amendment of the United States Constitution provides that “all powers not delegated to the United States by the Constitution, nor prohibited by it to the States, are reserved to the States respectively, or to the people.” Supreme Court Justice Brandeis highlighted the role of states in our system as “laboratories of democracy “Alexis de Tocqueville saw states as bodies standing between central government and the isolated citizen, They provided an opportunity to practice democracy and served as a barrier to mass society conformism. The Tenth Amendment on occasion has served these causes, but at least as often states rights has been a cover for anti-democratic agendas. Like any constitutional principle its meaning and implications are determined through political struggle.

In the Trump era states and cities have asserted the right to protect undocumented residents from incursions on their civil liberties by agents of the federal government. In addition the state of California has imposed fuel economy standards in excess of the federal requirement. Here we have the spectacle of a Republican president, whose party has long advocated local control, asserting the primacy of the Federal government.

Such priorities are not expressions off theories of federalism. This is employment of central government to advance a xenophobic/corporate agenda. States and cities cannot be trusted to supervise or protect undocumented residents or to provide adequately for the economic and physical health of its citizens. And since Trump and his allies have almost complete control of the federal government while being badly outnumbered in coastal state houses they will strongly assert the right of the federal government.

At least some of the time! On the other hand, the ex confederate states can be trusted to protect the civil rights of their African American minorities.so an expansive view of states’ rights should be the default position. Jelani Cobb writing in the New Yorker comments on the consequences: “In an opinion that eviscerated the Voting Rights Act of 1965, Chief Justice John Roberts wrote that discrimination still exists, but not sufficiently to warrant the ‘extraordinary’ remediation measures that the act imposed on the states of the former Confederacy. That argument is roughly equivalent to saying that a decline in the prevalence of an infectious disease means that we should stop vaccinating against it. Within hours of the decision, Texas announced a strict new voter-I.D. law. Mississippi and Alabama shortly afterward began enforcing similar laws that previously had been barred.” (This is written before the pandemic.)

The issues involved in this voting rights controversy have origins and parallels in Civil War historiography. For historians and activists who have wished to downplay the role of slavery in causing the war the argument is that the war was fought over a belief in states’ rights and the desire to curb federal overreach. This of course is pure fantasy, thoroughly doused by attention to the Fugitive Slave Act.

No act better illustrates the plantation elite willingness to employ the power of government to secure and enhance their own power and wealth than the Fugitive Slave Act As Eric Foner puts it in The Nation: “The law authorized federal marshals to capture people who had escaped from the slaveholding Old South, federal commissioners to order their return to bondage, and federal troops to carry out these orders. The act made it a federal crime to aid fugitive slaves or refuse to assist in their capture; it also stripped accused runaways of their legal rights, including to testify on their own behalf, and invalidated numerous state laws meant to protect Northern blacks from kidnapping and sale into slavery.”

When state and local government can’t or won’t enforce pro corporate agendas the federal government often steps in. Food writer Michael Pollan points to one outrageous example: ”In order to reopen their production lines, Tyson and his fellow packers wanted the federal government to step in and preempt local public health authorities; they also needed liability protection, in case workers or their unions sued them for failing to observe health and safety regulations.”

The unions and regulations to which Pollan refers had their origins in Progressive era exposes, with Upton Sinclair Jungle the standout. My own take is that federal preemption of local rules is appropriate when those local standards are discriminatory (voting rights in the ex Confederacy) but should be resisted when local or state rules expand access to economic rights or impose more rigorous health and safety standards.

More broadly post New Deal political leaders have privileged central government as the arena on which progressive reforms must be won. The successful activism of the Koch brothers challenges this tunnel- vision focus on D.C.

With a rigidly unified Senate hopes from DC must be muted, but state- level reforms remain a strong possibility. Those hopes would be enhanced if advocates move beyond scholarly constitutionalism. Make the best constitutional argument but move quickly to the hypocrisy inside Republicans’ selective invocation of states’ rights. Then address the power dynamism from which arcane debates distract us. Pandemic outbreaks in a South Dakota meat processing plant could be an occasion for immigrant rights groups, consumer labor unions, food safety to coalesce around a number of state –level reforms. With proper prodding states can once again become laboratories of democracy.