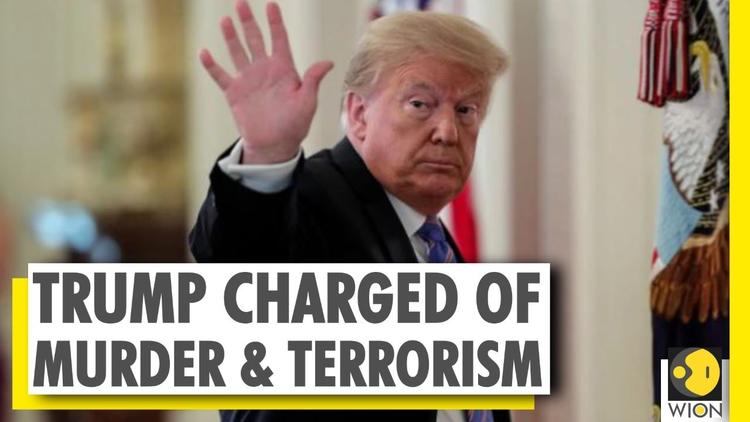 Ann Arbor (Informed Comment) – Mehr News Service reports that Tehran prosecutor Ali al-Qasi Mehr issued an arrest notice with Interpol on Monday for President Donald Trump and 35 other American officials. The request was for Interpol to issue a “red notice” for an act of murder and terrorism, to wit, the assassination on January 3 of Iranian General Qasem Soleimani at Baghdad International Airport. Soleimani headed the Jerusalem Brigade (external special ops.) of the Iranian Revolutionary Guards Corps, Iran’s national guard.

AFP reports that Interpol cited article 3 of its constitution when asked about the Iranian request, which says, “it is strictly forbidden for the Organisation to undertake any intervention or activities of a political, military, religious or racial character.”

The Interpol response highlights the subjective character of international law. Soleimani was certainly murdered. He had just arrived in Baghdad, Iraq, on a civilian airliner and checked through the Iraqi visa process with a diplomatic passport. Then Iraqi Prime Minister Adel Abdulmahdi told parliament that he had invited Soleimani to Baghdad in a mediation effort between Tehran and Riyadh to reduce Iran-Saudi tensions.

Trump announced that Soleimani had been coming to Iraq to kill Americans, an allegation that Abdulmahdi denied and for which there is no evidence at all. The Department of Defense account of the operation did not make that claim, demonstrating that it is a lie (one of Trump’s 20,000).

CNN’s Wolf Blitzer, who began his career as a flack for the American Israel Public Affairs Committee, breathlessly announced in support of Trump’s act of murder that Soleimani had “killed millions.” I’d like to see him substantiate that allegation. When, where?

Which is not to say that Soleimani is not responsible for many deaths. These include Baathist Iraqi troops who invaded and occupied part of Iran in 1980 and who went on fighting Iran until 1988. Since Iraq invaded Iran and tried to steal its oil-rich province, I’m not sure you can hold those deaths against Soleimani.

He also played a role in the 1990s with Lebanon’s Hizbullah in ending the Israeli occupation of 10% of Lebanese territory. Resistance against occupation is recognized in international law.

He coordinated Iraqi Shiite militias in their fight against al-Qaeda and then ISIL from 2003 through 2018. Some of them killed some US troops, though most such US service personnel in Iraq were killed by Sunni Arab groups. Others were killed by Muqtada al-Sadr’s Mahdi Army, which was one of the militias that disliked Iran and which Soleimani did not run. That is, the vast majority of those killed in Iraq whose deaths could in some way be laid at the feet of Soleimani were Sunni Arab Baathists or religious extremists.

Soleimani also coordinated efforts of Lebanon’s Hizbullah and Iraqi militias in Syria, fighting rebels against the government of strongman Bashar al-Assad in coordination with the Syrian Arab Army and the Russian Aerospace forces. Some of these rebels were Muslim Brotherhood, others began as political liberals, but many were or became extremists.

Those Soleimani killed or over whose killing he presided were almost entirely engaged in warfare. He was a general in the Iranian military. In all these theaters– Lebanon and Syria and post-2003– Soleimani was operating with the express consent of the host government.

I take a dim view of Soleimani and his activities for the most part. His “Hizbullah” model has deeply injured democracy in Lebanon and Iraq, and his intervention in Syria propped up a criminal regime.

The US media, however, tagged him as a “terrorist.” This is a misuse of the term. Terrorists, as recognized in the US Federal code, are non-state actors who deliberately kill civilians to achieve a change in political direction. Generals of rival states are not terrorists. If they do commit enormities, those would fall under the rubric of “war crimes,” not terrorism.

So here’s the thing. Trump unilaterally whacked Soleimani on Iraqi soil without the permission of the Iraqi government, violating the terms under which US troops operate in Iraq as well as committing murder against Soleimani and those with him. Interpol won’t put out a red notice on Trump, because it codes his actions as political rather than criminal. But it has entertained many charges against individuals guilty of similar crimes.

Trump violated US law. Gerald Ford issued an executive order saying ““No employee of the United States Government shall engage in, or conspire to engage in, political assassination.” It was reissued and strengthened by Jimmy Carter and Ronald Reagan. The US has not declared war on Iran, so the assassination was conducted during peacetime.

Trump also violated international law: “Article 2(4) of the U.N. Charter requires states to “refrain in their international relations from the threat or use of force against the territorial integrity or political independence of any state, or in any other manner inconsistent with the Purposes of the United Nations.”

The exception would be self-defense, but as we have seen, Trump’s claims of self-defense are ridiculous and not supported by Pentagon documentation.

So, murder, pure and simple. But the US press and politicians for the most part would not use that word.

So why should Iran’s complaint against Trump be so summarily dismissed by Interpol?

Because, as we all discovered in school when we read George Orwell’s ‘Animal Farm,’ some animals are more equal than others.