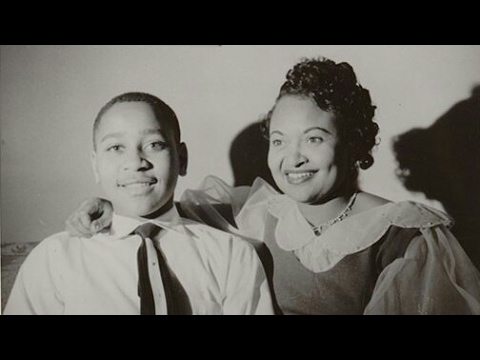 Tucson, Az. (Informed Comment) – In the early morning hours of August 28th, 1955, two white men burst into the Mississippi home of Moses Wright where 14-year-old Emmett Till slept. Till had come down from Chicago to visit his cousins and was accused of having flirted with a white woman, Carolyn Bryant, while at a local country store with some friends four days earlier.

Around 4:00 am, Carolyn’s husband, Roy Bryant, and his half-brother, J.W. Milam, dragged Till from his bed and put him in their truck. In the hours that followed, Bryant and Milam beat, mutilated, and shot Emmett Till. To dispose of his body, they wound barbed wire around his neck, attached it to a metal cotton gin fan, and threw his corpse into the Tallahatchie River. When it was found days later, he was so unrecognizable, his cousin was able to identify him only from a ring he wore on one of his fingers.

Authorities wanted to bury him immediately, but Emmett Till’s mother, Mamie, insisted that his remains be sent back to Chicago. There, at his funeral, she left his casket open for all to see. Hideous photographs of the bloated and disfigured boy appeared in newspapers and magazines across the country highlighting the barbarousness of the lynching. No longer able to ignore what they couldn’t see, people across the country were forced to confront these brutal, racially-motivated murders.

Typical of those times, Till’s killers were acquitted by an all-white jury. The gruesome images of Emmett Till in his coffin nevertheless helped launch the civil rights movement. This would be one of the first times the photographic images of racial bigotry on display would galvanize people into action.

Eight years later, on April 16th, 1963 Martin Luther King, Jr. penned his now famous “Letter From a Birmingham Jail” in which he responded to fellow clergymen who had called his non-violent direct action activities “unwise and untimely”. “When you have seen vicious mobs lynch your mothers and fathers at will and drown your sisters and brothers at whim; when you have seen hate filled policemen curse, kick and even kill your black brothers and sisters; …when you are forever fighting a degenerating sense of ‘nobodiness’ – then you will understand why we find it difficult to wait. There comes a time when the cup of endurance runs over, and men are no longer willing to be plunged into the abyss of despair.”

How timely King’s words ring today. As protesters throng the streets of Minneapolis and other major cities across the United States, appalled by a police officer’s public lynching of George Floyd; by the vigilante murder of Ahmaud Arbery; by the shooting death of Breonna Taylor in her own bed; and by far too many other similar and deeply disturbing killings, it is not difficult to understand why in many cases these demonstrations descended into violence. The Civil Rights Movement of the 1960s, for all its accomplishments, failed to rid our society of the plague of racism. Every year we are faced with more killings of unarmed black men and women and, more ominously, with the impunity of the perpetrators of those killings. While I believe violence will never purge our society of the evils of racism, bigotry, and injustice, I am nevertheless unsurprised that, in the past week, so many of the protesters have resorted to wanton destruction to express their anger.

“A riot is the language of the unheard,” King once memorably remarked. His words ring true today more than ever. As governors, city councilmen and women, news anchors, police officials, religious leaders, and others plea for calm and appeal to the civic honor and need for unity of the citizens of our cities, they are also mobilizing local police forces, fire departments, and the national guard to attempt to restore order. There is something inherently flawed in these national entreaties to stay home and respect the calls for peace. As King continued, “I must confess that over the past few years I have been gravely disappointed with the white moderate. I have almost reached the regrettable conclusion that the Negro’s great stumbling block in his stride toward freedom is not the… Ku Klux Klanner, but the white moderate, who is more devoted to ‘order’ than to justice; who prefers a negative peace which is the absence of tension to a positive peace which is the presence of justice…”

Those weariest of the years of persistent discrimination and harassment are unlikely to be mollified by pleas for civility and respect for the rights and property of others. It is time for our local and national leaders to address their grievances. Rather than beseeching people to obey the law and refrain from using force, our leaders need to be acknowledging the social and economic injustice, oppression, and inequality so many Americans encounter day after vexing day. Protesters don’t want to return to the status quo. They don’t want to be told to quiet down. They want more than for the murderers of innocent people to be held accountable for their actions. George Floyd is not the cause of the unrest; he is the symbol of it. Whether it is the swollen, deformed face of Emmett Till or the image of a near dead and gasping George Floyd with the knee of Derek Chauvin crushing his neck, the issue transcends impropriety. People are not simply asking to breathe; they are asking to breathe free.

Vintage Throwback Classics: “The Story Of 14-Year-Old Emmett Till”