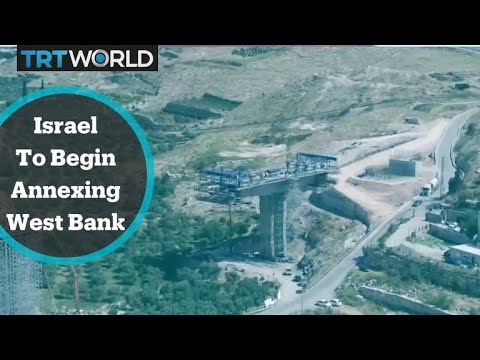 ( Middle East Monitor ) – The US administration has suspended talks with the Israeli government on the plans to annex large parts of the West Bank, due to the dispute over the plan and its implementation between Israeli Prime Minister Benjamin Netanyahu, and leaders of the Blue and White party, Defence Minister Benny Gantz and Foreign Minister Gabi Ashkenazi.

Maariv reported on Thursday, that following a dispute that occurred between the aforementioned parties during a meeting attended by US Ambassador to Israel David Friedman: “It was decided that the talks would not continue until the partners in the government reach mutual understandings.”

Meanwhile, Netanyahu, Gantz and Ashkenazi are continuing discussions on the annexation plan. Netanyahu seeks to declare the imposition of Israel’s “sovereignty” over the settlements, “and perhaps over the [occupied] territories as well”, according to Maariv, while the issue of recognition of the Palestinian state was not mentioned.

While the Blue and White party opposed this demarche, parties close to Gantz confirm that he is committed to all the principles of the “deal of the century” proposed by US President Donald Trump.

Sources in the Likud and Blue and White parties indicated that Netanyahu and Gantz will meet separately in an attempt to reach understandings.

The newspaper quoted sources familiar with the talks stating that: “Ashkenazi is the one to insist on not conceding to Netanyahu and demanded recognition of the entire peace plan.”

Gantz and Ashkenazi have also established a parallel and independent communication channel with Trump’s son-in-law, Jared Kushner: “In an attempt to influence the US position, they have scored a certain success in this endeavour, and this is a matter of concern to Netanyahu,” added Maariv.

Right-wing newspaper Israel Hayom indicated that Netanyahu does not intend to wait for the Blue and White party’s approval on the annexation plan, and that: “Next week is the date to implement the plan to impose Israeli sovereignty.”

Israel Hayom added that Netanyahu handed Friedman several maps of the areas to be annexed, but: “None of the maps were similar to the concept map published by the Americans a few months ago. If he gets the green light to pursue one of the alternate maps, Netanyahu will take it and run full steam ahead.”

The newspaper quoted Netanyahu as stating in closed talks, that even if the Blue and White party opposes the plan, he would present it to the government for approval, considering that the government will endorse the plan by a majority of one vote, from Minister Yoaz Hendel.

According to the newspaper, Netanyahu intends on bypassing the Knesset, believing that the matter will be settled once the government takes a decision on the issue.

The newspaper added that Netanyahu stressed during the talks that if the Blue and White party succeeds in thwarting the plan to impose Israel’s sovereignty in the area, he will not hesitate to go to early elections.

The newspaper quoted sources in the Likud party who estimated that: “This is a possible exit option, as the five-month time limit is shorter than it should be. However, Netanyahu may do so after five months in an extreme case only, which is losing control over the coalition.”