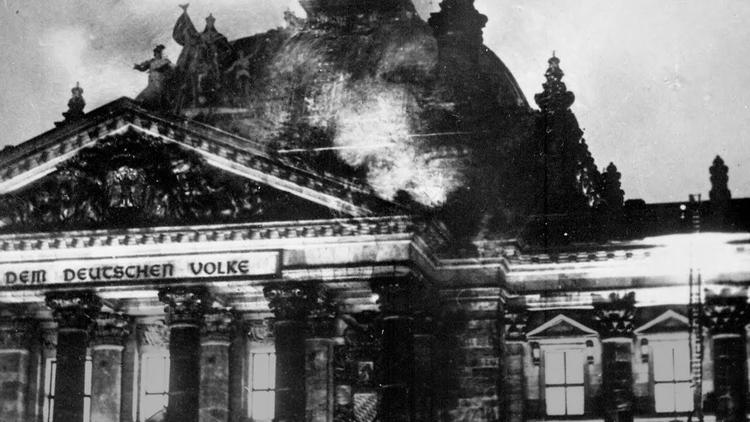 In a recent statement, House Speaker Nancy Pelosi referred to the firings of [State Department inspector general] and the other inspectors general as ” dangerous.”

“The President must cease his pattern of reprisal and retaliation against the public servants who are working to keep Americans safe,” she said, “particularly during this time of global emergency.”

Like bullies on the playground Trump sits back and hollers :”see if you can make me.” Media and centrist Democrats resistance to Trump’s growing list of serious crimes has at worst been little more than admonishments and a best invocation of largely unenforceable Constitutional principles.

Johns Hopkins political theorist William Connolly warns us that : “Though the US differs in important ways from Germany in the thirties there are affinities that might lead us to see German experience as a cautionary tale “

Connolly points out that “Immediately after Hitler became Chancellor, Nazi use of the radio for national rallies accelerated, street violence increased, and defilement of opponents intensified. A three ring circus. The idea was to link all opponents together, above all to identify Social Democrats with Communists through invective and to treat Jews as the “red thread” tying both movements together ..”

Connolly emphasizes the ways in which agenda, narratives, and even bodily expression build on each other and in proper circumstances coalesce in a fierce attack on democracy. Trump has colluded with Russia, suppressed voting, shut down government, misallocated Congressionally authorized funds, tried to hide information about the seriousness of the Covid virus. He has advocated physical violence against political opponents and voiced support for such violence when it occurs. Engaged in an ongoing obstruction of justice regarding Russia and withheld publicly relevant information about his personal finances. Trump no longer runs with the benefit of a booming economy, but for that reason he is even more to be feared. He is at his worst and most vicious when cornered.”

Connolly offers no definitive prediction of a Reichstag event, the burning of the German legislative chamber providing Hitler with a pretext for martial law and a brutal crackdown on opposition parties. He does worry about the destructive, mutually intensifying interaction of climate crisis and global pandemic. Global capitalism’s expansionary tendencies exacerbate inequality., providing fertile ground for flourishing of this and subsequent deadly viruses. Should deaths make an upward spiral this summer, a real possibility given Trump’s determination to restart a normal economy that exists only in his mind, social unrest might follow. Trump, cornered, may authorize Barr to arrest some of those whom he routinely vilifies. In this context it is worth remembering that it was when the body bags started coming home on national TV that Lyndon Johnson lost support for the Vietnam War. Trump’s opponents best be aware of the many uses to which such a catastrophe could be put.

These considerations make electoral defeat of Trump imperative. A second term, especially if Republicans took the House, would leave him completely unconstrained. Franklin and Marshall labor scholar Van Gosse worries about the possible emergence of an “illiberal democracy,” (are we already partly there?). He describes the process:

1. The packing of the judiciary.

2. The planting of loyalists in all the key decision-making positions of the government.

4. Use police to take control of the state’s monopoly on legitimate violence.

Under such a regime it is likely that Social Security would be privatized, environmental and occupational regulations further decimated. Public health institutions and practices eviscerated.

But a return to the pre-Trump normal is neither possible nor desirable. For one thing there is no guarantee that Trump will accept results if he loses. In addition normal centrist Democrat agendas and narratives were insensitive to the anxieties that paved the way for Trump. Guard rails to save us from the likes of Trump were never adequate to begin with and have been largely obliterated. What was best in those rails were products of broad social movements. (Link to How DOES a Democracy Die? ) Now is the time to build a movement across race class and gender to democratize all facets of our social and economic lives. Such a movement is a long time project, but working toward it now may prepare us for some of the more https://www.upress.umn.edu/book-division/books/aspirational-fascismimmediate dangers that lie ahead.