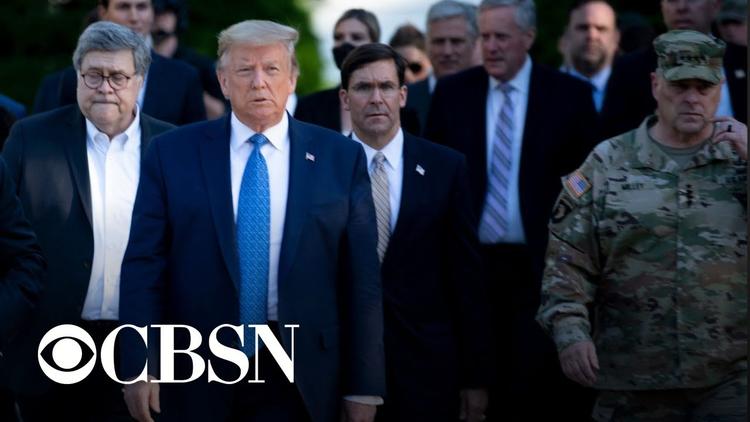 It was a striking moment: Donald Trump, Bible in hand, posing for photos in an apparent moment of political theater made possible by the dispersal of protesters through the use of tear gas.

The president’s visit to St. John’s Episcopal Church, known as “the Church of the Presidents,” came immediately after giving a Rose Garden speech framing himself as “your president of law and order” and threatening to send federal troops to “restore security and safety in America.” The next day, Trump made another high-profile visit to a place of worship, this time Washington’s St. John Paul II National Shrine.

Coming at a time of social turbulence, critics accused Trump of following authoritarian-leaning world leaders by sidling up to religion to reinforce an image as a strongman defending a particular brand of tradition. Bishop of the Episcopal Diocese of Washington Mariann Budde said as much, commenting that Trump used the Bible at St. John’s “as if it were a prop or an extension of his military and authoritarian position.”

As a scholar who has researched the interaction of politics and faith for decades, I know how potent religion can be as a political tool.

Religion creates meaning in our lives by articulating values about how we relate to one another. But just as it can unite us, religion can also be a source of division – used to “other” people who are not of the faith and don’t share the same traditions and rituals.

When enough people perceive – or can be convinced – that traditional elements of the social fabric are at risk, religious signaling through the use of symbols and images can help would-be authoritarians cement their power. They present themselves as protectors of the faith and foes of any outsider who threatens tradition.

In Russia, this phenomenon is seen in President Vladimir Putin’s forging of a strategic alliance with the Russian Orthodox Church. For his part, Putin presents himself not just as a commanding leader, but also as a devoutly religious Russian. When he appears shirtless, for example, the large cross he wears around his neck is always visible. Meanwhile, the Church promotes traditional moral values and maintains a distance from the rest of the worldwide Orthodox Christian community, thereby separating the “truly Russian” from the outsider. In their most recent collaboration, Putin and the Church proposed amendments to the Russian constitution that would enshrine Russians’ faith in God, define marriage as the union of a man and a woman and, tellingly, proclaim “the great achievement of the [Russian] people in defense of the Fatherland.” These changes, all of which are intended to reinforce Putin’s base of support, would be jarringly nationalistic additions to the constitution.

Putin benefits from this insider-outsider dynamic in advancing his goal of restoring Russia to his vision of its past territorial glory. In justifying the Russian incursion into Crimea, Putin argued that the region had “sacral importance for Russia, like the Temple Mount in Jerusalem for the followers of Islam and Judaism.” Defending and expanding Russian territory is a much easier sell if it is framed as the defense of the holy.

We see a similar dynamic in India, where Prime Minister Narendra Modi’s grip on power relies in large part on his embrace of a version of Hindu nationalism that elevates Hindus as “truly Indian” insiders and singles out Muslims as outsiders.

Like Putin, Modi wraps himself in religious imagery. He makes high-profile visits to remote Hindu temples while electioneering and never wears green because of its association with Islam.

Modi’s Hindu nationalism cements his popularity among devout Hindus and builds public support for anti-Muslim policies, such as stripping the only majority-Muslim state in India of its autonomy and enacting a controversial new law preventing Muslim migrants from attaining Indian citizenship.

Trump has stumbled in attempts to portray himself as personally devout, declining to name a favorite passage from the Bible and stating that he has never sought forgiveness from God for his sins.

Nevertheless, public opinion polls have consistently shown that white Christians comprise the core of Trump’s base, although there are recent signs of a dip even among this key group.

And while it is important to note that many white Christians do not support Trump, 29% of evangelicals go so far as to say they believe he is anointed by God.

Where Trump succeeds is in presenting himself as a Christian nationalist, much as Putin and Modi style themselves as the stout defenders of their countries’ dominant religions.

One way Trump achieves this end is by making statements such as this one on the campaign trail earlier this year: “We’re going to win another monumental victory for faith and family, God and country, flag and freedom.”

In their new book “Taking America Back for God,” sociologists Andrew Whitehead and Samuel Perry contend that many of Trump’s white Christian supporters see him as their long-awaited savior – not just the protector of traditional religion, but also the defender of a bygone way of life.

In that imagined past, white men ruled the roost, families went to church every Sunday and outsiders knew their place. A deep-rooted desire for a return to that past may have been why Trump’s Make America Great Again slogan has proved so potent. As Yale scholar Philip Gorski has argued, that phrase can be interpreted to mean “making white Christianity culturally dominant again.”

As such, we should not be surprised that in the current moment of crisis Trump is attempting to use religion to reinforce differences between his supporters and his opponents. Like Putin, he is posing as the defender of a particular version of a glorious past. And echoing Modi, he is doing this by building support through the denigration of the outsider.