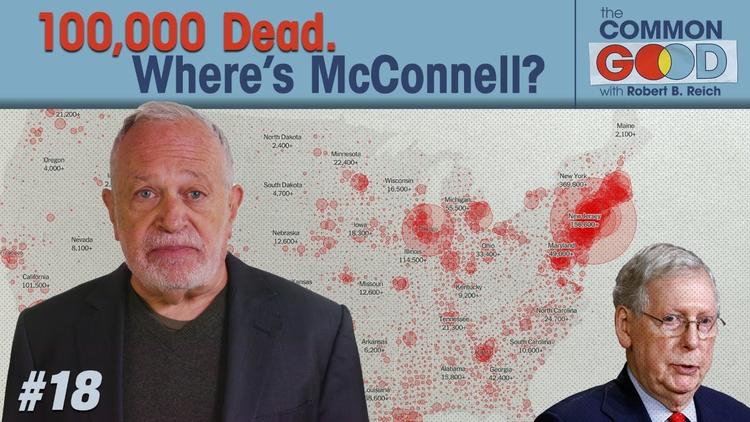 Trump’s nonfeasance goes far beyond an absence of leadership or inattention to traditional norms and roles. In a time of national trauma, [Trump] has relinquished the core duties and responsibilities of the presidency. He is no longer president. The sooner we stop treating him as if he were, the better.

Reich recounted the Trump non-response to pandemic, protests and a collapsing economy, concluding that the president is not a president at all. Some might feel uncomfortable with that idea. After all, like him or not, he has the title. But Reich’s argument is that the title doesn’t make you a president; being a public servant requires performing your duties for the common good.

That idea has a long and shared history East and West, and that history provides a useful perspective on how to respond to the Rotten Leader problem. In China, Mencius early on realized that state policy could be a murder weapon, no different from a knife or a club. If the king wielded that weapon and people died, he was a criminal, and no longer king. Following that logic, one could argue that, from Puerto Rico to the Pandemic, policy was Trump’s weapon of choice.

An imperial edict (2nd c. BCE) recognized that some laws are “illegitimate laws” because they do nothing but harm the people. “Laws that harm the people are tyrannical.” That establishes an unambiguous criterion for rotten leadership, such as declaring a fake national emergency to justify the mistreatment of vulnerable minorities. By the early 18th century this edict and others had been translated into English and were being referenced by an early radical group in England, the Free Thinkers.

Illegitimate government, like its laws, put honest officers under pressure to hold the line. In the 11th century the statesman Su Shi made it clear there are times when a serving officer has to resist: “(if my superior wants to die for the nation, I will follow), but some policies lead to good government, and others to chaos. I will follow or resist according to my judgment.” Underlying this view is a deeper understanding, as Sima Guang put it, that an officer’s authority didn’t come from the emperor at all; it came from the people of the empire. That’s why officers could be punished if they exercised powers the office didn’t have.

Sima Guang’s essays were being read in England in the early 18th century. About the same time the radical pamphlet Cato’s Letters distinguished clearly between a title and its authority. “Cato” argued that,ifthe purpose of office is to serve the public good, then how is it that the legitimate powers of office should be equally available to a qualified officer as well as to “a lawless intruder, who … under the mock name of a public magistrate [officer], is a public oppressor, scourge, usurper, executioner, and plunderer?”

Sounds like people were dying at the hands of policy-weapons. Cato concluded that if we grant to both men the same powers, that triggers an end to all authority. As was already standard in China, Cato assumed that the legal powers of office require service to the nation and its people. Without that, a title is just a “mock name” and nothing more.

Thomas Paine (1737-1809) agreed. In Rights of Man he stressed that an office presupposes competence for the job and, where that is lacking, you have nothing more than an empty title. So, what to do when corrupt men hold titles?

If a whole country is disposed to hold them in contempt, all their value is gone, and none will own them. It is common opinion only that makes them anything, or nothing, or worse than nothing.

Paine’s insight was that the most effective way to deprive privileged parasites of their titles was simply not to recognize them.

Thomas Jefferson recognized two ways that American citizens might legitimately reject an officer’s authority. The first was to question the legitimacy of illegitimate laws:

A strict observance of the written laws is doubtless one of the high duties of a good citizen, but it is not the highest. The laws of necessity, of self-preservation, of saving our country when in danger, are of higher obligation. To lose our country by a scrupulous adherence to written law, would be to lose the law itself, with life, liberty, property &amp; all those who are enjoying them with us;

As in China, Jefferson’s criterion for an illegitimate law was that it harmed the nation and its people. Like Su Shi, Jefferson recognized that professionals in government shoulder a responsibility to hold their loyalty to the nation above their obligation to a superior:

The officer who is called to act on this superior ground, does indeed risk himself on the justice of the controlling powers of the constitution, and his station makes it his duty to incur that risk. But those controlling powers, and his fellow citizens generally, are bound to judge according to the circumstances under which he acted.

It is surprising how consistent all these arguments remain over more than two-thousand years and across half the span of the globe. Even our imagined “Despotic Orientals” recognized a higher authority in the people’s welfare and in an officer’s duty to the nation. Leading Enlightenment thinkers agreed there are times when the legitimacy of the title must be denied. The one surprise is that this problem is still with us, here in the land of the free.

Since the founding of the Trump-Kushner dynasty, Robert Reich may be the first to put his finger on the “mock name,” or phony title problem. Over the past few months it has been stunning to watch our nation’s officers at all levels bend down to the authority of a bungling amateur’s title, even when it means visiting harm directly on fellow Americans. Sometimes this is understandable, with experts calculating they can do more good within, than without, but too often it comes down to blind obedience. Twitter has developed a more effective way to challenge the title. If others in media speak truth to power, professionals in government might find the courage to hold to the law when the chief speaks rottenly. Short of that, it will be difficult to prevent Trump’s policy-weapons from claiming more innocent American lives.