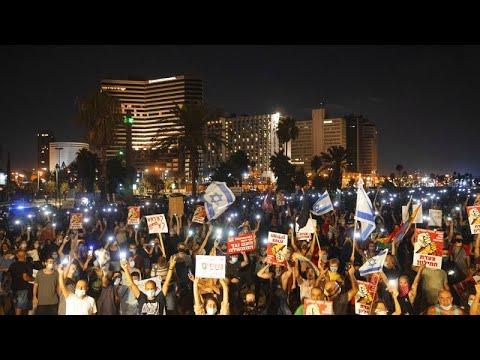 Ann Arbor (Informed Comment) – Israeli Prime Minister Binyamin Netanyahu, in office continuously since 2009, is facing a perfect storm. His trial on corruption charges is ongoing. The unemployment rate is 20 percent, and Israel has slightly more cases of the novel coronavirus per capita than Brazil (one of the countries with the worst record in fighting the pandemic).

Chemi Shalev at Haaretz argues that Netanyahu has made things worse for himself. The protests have grown ever larger and more youth have joined in. This week, police have deployed water cannons against the demonstrators, including shooting at their heads, which is very dangerous and outraged the public. Far right wing Likud thugs were summoned by Netanyahu to attack the protesters, and a demonstrator was stabbed in Beer Sheva. Shalev says that Netanyahu initially hoped to counter the rallies with large pro-him crowds, but only the thugs showed up.

On Saturday, 5,000 demonstrators, including a 1,000-strong ‘wall of Moms’ gathered outside Netanyahu’s official residence in Jerusalem, angrily demanding his resignation. Some 14 were arrested. There were also rallies in Tel Aviv and Caesarea.

Netanyahu dismissed them as “leftist anarchists.”

His usual tactic of trying to divert attention from his problems by crying “Iran” does not seem to be working, except for US secretary of state Mike Pompeo.

AFP reports that many Israelis are upset by Netanyahu’s mishandling of the pandemic (he opened the country back up for business in mid-May, declaring victory way too soon). They are also bewildered by his tactics to deal with the 2,000 new cases a day in this country of 8.8 million. His government has lurched from one policy to another.

AFP quotes Amit Finkerstin as saying “One day yes, one day no. The government has no plan, the people have no perspective, and do not know when they will have money. The government is only preoccupied with itself.”

Israel’s attorney general has just argued that the some $300,000 paid by supporters for his wife Sara’s legal fees could be deemed to have aided Netanyahu himself.

Moreover, Netanyahu will have to appear in court in person for his corruption trial this week.

These demonstrations have grown to be the largest instance of social unrest since 2011, when Israeli youth protested high rents and costs of living, taking some cues from the Arab Spring around them.

In a parliamentary system, the protests do not endanger Netanyahu’s tenure as prime minister. If the demonstrations garner ever growing and really big public support, it could convince some of his more lukewarm allies in the current national unity government to pull out and lead to new elections. At the moment, that scenario seems unlikely. But then these protests were unexpected, as well.