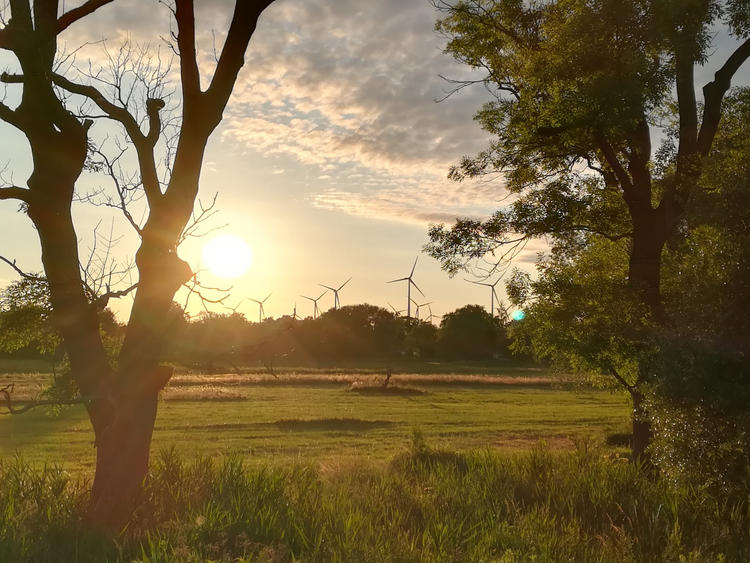 Renewables covered more than half of Germany’s power consumption in the first six months of 2020, according to a first estimate by think tank Agora Energiewende*. As coal use dropped and demand was low due to the coronavirus crisis and energy sector emissions fell significantly. Germany will most likely reach its original target of reducing greenhouse gases by 40 percent this year compared to 1990 levels. Agora Energiewende called for a massive renewables expansion to ensure emissions continue to fall even after the impacts of the pandemic come to an end. [CORRECTION: 2020 climate target is over 1990 levels.]

Onshore wind power generated more than 20 percent of Germany’s power in the first half of 2020.

The coronavirus-related drop in electricity demand, a slump in coal use and strong winds and long periods of sunshine have pushed the share of renewables to a record 50.3 percent of power consumption in Germany in the first half of 2020, think tank Agora Energiewende said based on a first analysis of prelimary data. Renewables produced 8 percent more power than during the same period last year, while lignite production fell 37 percent and hard coal a staggering 46 percent. German electricity exports dropped about two-thirds.

Agora Energiewende cited preliminary data showing that the energy sector significantly reduced CO₂ emissions – by 30 million tonnes of CO₂ – largely due to the pandemic’s effects on demand and power prices. Germany will “most likely” reach its original 2020 target of a 40 percent reduction in greenhouse gas emissions compared to 1990, think tank head Patrick Graichen told news agency dpa, confirming earlier estimates. Agora Energiewende warned, however, that this was no climate policy success and that emissions could rise again. In order for emissions to fall permanently, many wind and solar plants would have to be built, the think tank said. However, the wind sector in particular remains sluggish. The latest rounds of tenders for new wind power plants on land were again massively undersubscribed.

The economic crisis caused by the coronavirus pandemic will sharply slow economic activity and the associated greenhouse gas emissions in Germany. The wide range of current economic forecasts is making detailed predictions for CO₂ output difficult. However, economists say comparisons with the 2009 recession can provide some early indications of where emissions might be headed, and Germany may now well exceed the government’s original 2020 target of a 40 percent emissions reduction compared to 1990.

Meanwhile, the impact of the coronavirus on the German electricity sector is far from over, writes Frankfurter Allgemeine Zeitung. Weekly electricity consumption has remained about 10 percent below 2019 levels, with only some ups and downs but no recovery, according to data from energy industry association BDEW. “This reflects that in many areas of industry – the largest sector of electricity consumption – production has not yet resumed at the usual level,” the BDEW said.

Germany reaching its 2020 target is “remarkable”, especially because the ambitious climate policy has not left the country worse off, Mojib Latif, head of marine meteorology at the Helmholtz Centre for Ocean Research Kiel, told weekly magazine Der Spiegel. It could thus serve as a role model. However, on a global scale, climate action is still insufficient, the climate researcher said. The coronavirus crisis offers the opportunity to introduce the systematic change necessary for sustainable greenhouse gas reductions, he added. “Whether the coronavirus crisis helps in the long run depends on us.” As one of the world’s strongest economies, Germany could lead a “coalition of the willing” on ambitious climate action that bets on renewables, digitalisation and new business models, he said. 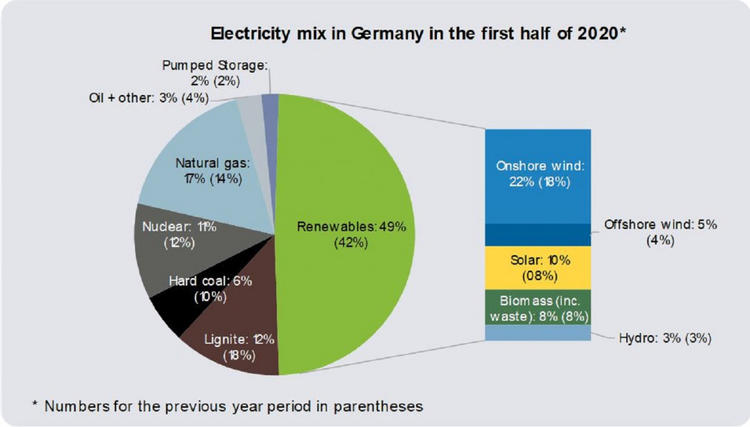 The share of renewables in power production, meanwhile, was at about 49 percent in the first half of this year. They generated about 126 billion kilowatt hours electricity from January through June, with almost 60 percent coming from wind turbines and 20 percent from solar power, dpa reported based on data from utility E.ON.

Natural Gas production increased by 11 percent and gas plants are “on the brink of” producing as much electricity as coal plants, said Agora. Coal production fell by 40 percent compared to the first half of 2019, and was responsible for less than one fifth of German power production, said Agora. 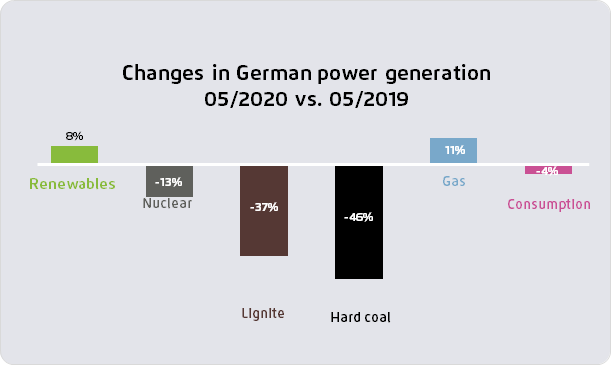 At the end of last week (3 July), German parliamentarians werescheduled to vote on the coal exit law, ending a two-year process that started with a multi-stakeholder commission recommending the closure of the last coal power plant in 2038 at the latest. The legislative draft stipulated more than 4 billion euros in compensation payments for lignite operators and early shutdown remuneration for hard coal plants, to be decided in auctions.

Researcher and environmentalists have said that the proposed legislation would not prevent an earlier exit from coal should market conditions turn coal plants uneconomical. Low gas prices and high CO₂ prices in the CO EU Emissions Trading System (ETS) have caused a slump in coal use in Germany.

“Coal power production, including lignite, is under increasing pressure,” said the Institute for Applied Ecology (Öko-Institut) in an analysis seen by Clean Energy Wire. While Germany’s remaining lignite units have largely generated constant amounts of electricity over the past years, production has “significantly declined” since autumn 2019. The institute expects the current development to continue in view of such determining factors as low gas prices, lower power demand, more renewables and CO₂ prices. The trend is likely to intensify over the next 10 years, due in part to the proposed European Green Deal, which would likely entail a strengthening of the ETS.

Julian Wettengel is a staff Correspondent for Clean Energy Wire. Before joining the team, he served as a parliamentary assistant to the Chairman of the Foreign Affairs Committee in the European Parliament. In this role, he was responsible for the preparation of speeches, articles and briefings for the chairman. Prior to his time in Brussels, he supported a professor at the George Washington University as a research assistant. Julian has also worked for a number of TV productions as camera assistant, sound operator and researcher. He holds a Master’s degree in political science from the University of Kiel.