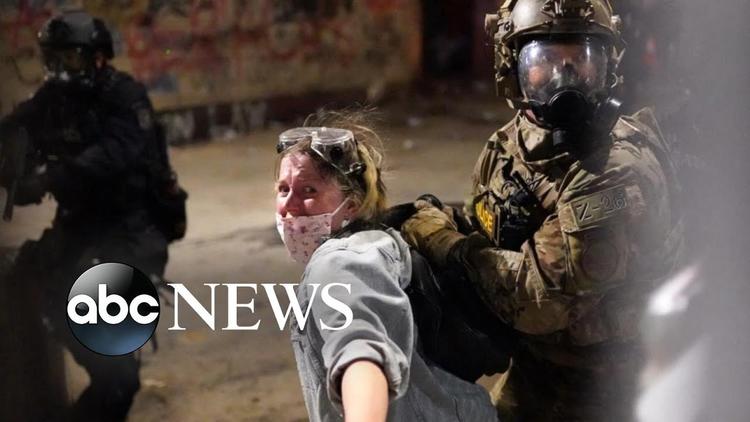 But the Trump administration shows no signs of changing course. Today the president announced that federal agents would also be sent to Chicago and Albuquerque. “This is the kind of thing we see in authoritarian regimes, ” Mary McCord, a Georgetown Law professor and former national security official at the US Department of Justice, told the New York Times.

While the actions of DHS agents in Portland are disturbing, they are also familiar. Human Rights Watch researchers working on US immigration policy have for many years seen DHS agents engage in lawless and abusive tactics against non-citizens in communities across the country. Numerous reports by Human Rights Watch and other organizations have documented frequent abuses, with little accountability.

The events in Portland are also part of a continuing pattern of DHS agents violating the rights of US citizens. In 2019, Customs and Border Patrol agents were revealed to have harassed, surveilled, interrogated, and detained journalists, lawyers, and activists at the US-Mexico border, interfering with their freedom of speech and movement. Border Patrol agents have been accused of racially profiling US citizens in border communities – in one case, two US citizens filed suit after being detained in Montana because Border Patrol agents had heard them speaking Spanish.

We have been watching President Trump stigmatize migrants and asylum seekers as dangerous and a threat to the US for years. We are now seeing him describe US protesters in similar broad strokes. Sending agencies with a long track record of abuse and little relevant training to police US cities highlights the contempt this administration has for the rights of US citizens and non-citizens alike.

Grace Meng, Senior Researcher, US Program, Human Rights Watch, is a human rights researcher, advocate, and writer. As a senior researcher in the US Program at Human Rights Watch, she focuses primarily on the rights of immigrants in the United States. She has written reports on such topics as farmworkers’ vulnerability to sexual harassment and violence, the impact of the War on Drugs on immigration law, and abusive immigration detention conditions. She has also collaborated with artists and photographers on multimedia features to make human rights more immediate and relevant to a wider audience, including an exhibit on immigration on display at the National Center for Civil and Human Rights. Grace and her work have been cited or published in a wide range of outlets, including Politico, NPR, USA Today, and the Washington Post.