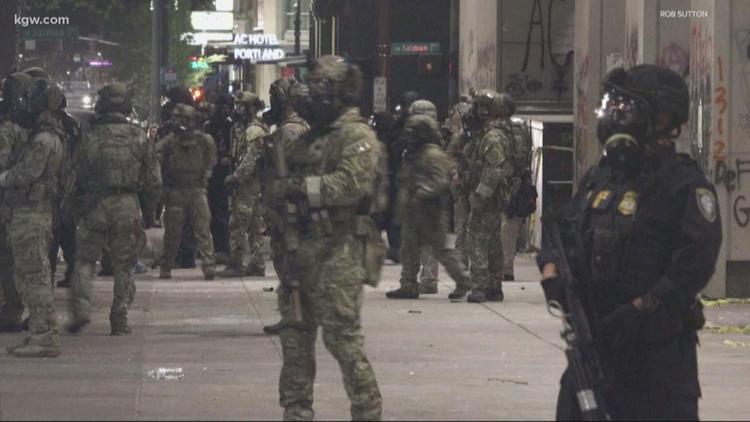 Ann Arbor (Informed Comment) – Ryan Haas and Conrad Wilson at Oregon Public Broadcasting report that Federal agents with no name tags pulled at least two persons off the street in Portland without obvious probable cause and put them in unmarked vehicles. Responsibility for one of the kidnappings has been admitted by U.S. Customs and Border Protection.

CPB maintains that the individual was suspected of criminal activity and had to be removed from the area abruptly for fear of a violent mob. Its officials also defended the lack of name tags on the grounds that agents have been targeted by doxing campaigns (the publication of their home addresses and personal details on the internet).

The video does not show a violent mob, and a democracy cannot be having anonymous agents of the state bundling people into unmarked vehicles without probable cause (or even with probable cause).

The ACLU has filed a lawsuit against the Federal agents in Portland, alleging, according to Skanner, that

“These agents, which have been deployed over the widespread objections of local leaders and community members, have been indiscriminately using tear gas, rubber bullets, and acoustic weapons against protesters, journalists, and legal observers. Federal officers also shot a protester in the head Sunday with a rubber bullet fracturing the person’s face and skull. Today’s lawsuit seeks to block federal law enforcement from dispersing, arresting, threatening to arrest, or using physical force against journalists or legal observers.”

These are the actions of a secret police. Secret police are a common institution in authoritarian states. They target dissidents and protesters, focusing on thought crimes rather than dealing with what you might call actual crimes. They report directly to the executive. They run secret prisons and camps.

The right of peaceable assembly is enshrined in the First Amendment to the US constitution, though it is a right often not de facto recognized by government.

Moreover, the US constitution, Article 1, Section 9, requires the preservation of habeas corpus except in times of foreign or civil war. Only Congress can suspend it. Habeas corpus is the principle that a judge may require law enforcement to produce an arrestee in court and specify the charges against the person or release him or her.

This constitutional principle cannot be upheld if the state agents who arrested the person are unknown and he or she has been whisked away in an unmarked vehicle. To whom would the judge apply for habeas corpus? That is, what the CPB did in Portland profoundly undermines the constitution.

CPB agents, Federal Marshals and agents of the Department of Homeland security were detailed to Portland, ostensibly to protect the Mark O. Hatfield federal courthouse and other Federal property during the past six weeks of demonstrations in Portland. The courthouse has often been painted with graffiti. The Feds say they have defended the building from charges at it by demonstrators.

It is not clear to me why the defense of the courthouse in Portland is not the responsibility of the civil police in Portland. The Trump administration, as we saw in Washington DC at Lafayette Park, likes having shadowy goons at its service.

U.S. Attorney Billy Williams concurs that an investigation of the arrests is warranted.

That these arrests were a Gestapo sort of politics rather than law enforcement is easily demonstrated.

On May 1, armed protesters entered the State House in Michigan. Some broke into the legislative chamber and stood, with guns, over the state representatives, one of whom put on a bullet proof vest. The militias and right wing agitators came again two weeks later and the legislative session was canceled. These were a right wing mob protesting the shut down of some economic activities by Gov. Gretchen Whitmer as a mitigation measure against the coronavirus. As a result of Whitmer’s measures, Michigan is in a substantially better place than the slavishly pro-Trump Deep South this July.

You will notice that no CPB agents were flown out to Lansing to defend the State House from this potentially violent armed mob. None were hustled into unmarked vehicles by nameless Federal agents.

The difference in response to the the two protests demonstrates conclusively that the CPB agents in Portland were functioning as Trump’s secret police, since they were only concerned with suppressing dissent when it was dissent against the policies favored by the president. It is not about a neutral rule of law for all. The infiltration of US security agencies by far right wing conspiracy theorists such as QAnon makes these infractions against the Constitution even more frightening.