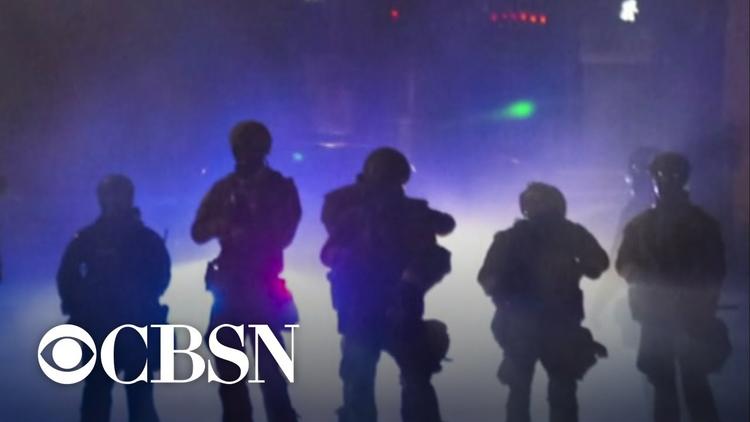 For those of us old enough to remember George W. Bush’s Iraq War, the use of the word “surge” to describe Federal agents sent into Democratic cities to break heads chills the soul. The agents even look like US infantrymen in Iraq, dressed in military-style uniforms and dangling the noses of their firearms.

The Bush team of inveterate liars and propagandists used the word “surge” because “troop escalation” had been given a bad name by Gen. Westmoreland during Vietnam. He and other generals kept assuring President Lyndon B. Johnson that they could defeat the Viet Cong if only they had enough troops, hence the escalation. They escalated all the way to 500,000 men, but they still lost. No one in my generation wanted to hear about a troop escalation ever again.

Bush at one point had 170,000 troops in Iraq. It wasn’t enough. The US military never controlled more than the soil on which they actually stood. Gen. Eric Shinseki had estimated that, based on the US military experience in the Balkans, 800,000 US troops would be needed to do Phase IV reconstruction after the invasion. The Bush team knew that the US public would never fall for a war if they admitted they might need nearly a million men. They more or less forced Shinseki into retirement that summer, as the guerrilla war in Iraq was gaining a head of steam.

Bush invaded and occupied Iraq on the grounds that the Saddam Hussein regime had stockpiled “weapons of mass destruction.” But it really hadn’t. When that pretext for war collapsed, the Bush team began talking up democracy promotion. Iraq would be a shining beacon on a hill, and would start the ball of democratization rolling throughout the Middle East. instead, Bush created a failed state and inadvertently gave rise to the ISIL terrorist group.

Bush had trouble finding enough troops to do all the rotations in Iraq that were needed. The troop levels fell to about 130,000. By fall of 2006, things were dire. Through 2006, a vicious Sunni-Shiite civil war had broken out beneath the noses of the American military in Iraq. It was fought in back alleys and dense slums, and the Americans didn’t have a clue. It was in part deliberately provoked by the Islamic State of Iraq, the successor to al-Qaeda in Mesopotamia, which had a theory that if they could make Iraq too hot for the US, they could take over. They targeted Shiite families and symbols to provoke that heat. Militias would capture members of the opposing militia and torture them to get information, then kill them. A thousand bodies of civilians were said to show up in the streets every month, and Baghdad police had to establish a corpse patrol to go around and pick them up in the morning.

Bush lost the midterms in November, 2006 and his bellicose secretary of defense, Donald Rumsfeld, was forced to step down. Rumsfeld had kept shining Congress on, that everything was going swimmingly in Iraq. There had been no looting on his watch (“how many vases could they have?”); there was no guerrilla war (“you go to war with the army you have”); there was no civil war. The new Democratic majority wasn’t going to put up with it.

Gen. David Petraeus was experimenting with counter-insurgency tactics. He went to Prime Minister Nouri al-Maliki, a Shiite, and said that he was going to “surge” in 30,000 US troops. they would tamp down the thousands of deaths by disarming the militias in Baghdad.

Al-Maliki, a strongly committed Shiite said that there was no problem with Shiite militias, only Sunni extremist ones. Petraeus countered that he could start by disarming the Sunnis, and then al-Maliki should go to the Shiites and convince them to disarm, since there was no longer a threat.

The US troops were surged in. They couldn’t hope to win the guerrilla war. The “surge” just brought troop levels back up to a previous high point. The US surge troops disarmed the Sunnis during the day, and then at night the Shiites ethnically cleansed them. Baghdad went from being roughly split between Sunnis and Shiites to being 75% Shiite. Ooops.

The surge worked, but largely because it inadvertently allowed the ethnic cleansing of a lot of Baghdad Sunnis. The violence had been in mixed neighborhoods, and there just weren’t many left after the surge.

It was enough to allow Bush to feel as though he had not been unceremoniously tossed out of Iraq. But he negotiated an end to the US military presence in 2011 (for which Republicans would mysteriously blame Barack Obama).

So that was the “surge.” It was intended to allow the US to recover tactical control of the streets of Baghdad. They never really did. The Shiite militias were the primary beneficiary.

Now, Trump is doing a “surge” of Federal agents into Democratic-run cities. They are violating the 10th Amendment by going out into the city to arrest people with no warrant or probable cause. Trump’s people allege that this is for the sake of democracy, since the shadowy antifa organization is roiling the downtowns of cities in a sinister plot against the soccer moms in the suburbs. (If Trump loses he soccer moms, he loses the election).

There isn’t an antifa organization. One problem with anarchists is that they aren’t very organized.

This time the surge troops are playing ISIL, attempting to provoke urban crowds so as to allow Trump to posture as the law and order president and the great white hope for saving the suburbs.

So in the tale of two surges, gradually the US government has been captured by the national security state to the extent that it is surging into US cities the way it surged into Baghdad. The US blue states are increasingly Occupied Territories. But instead of combating a wily Islamic State of Iraq that was trying to set people against one another, the Feds have now become ISIL themselves.