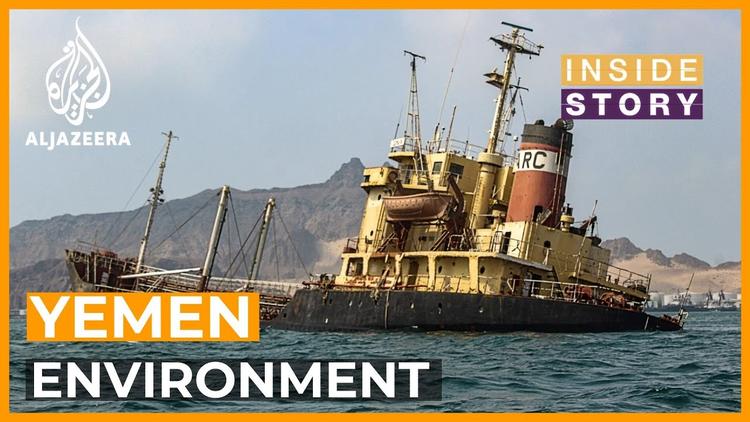 ( Human Rights Watch) – Houthi authorities in Yemen should immediately permit United Nations experts access to a supertanker moored off Yemen’s coast that risks spilling over a million barrels of crude oil into the Red Sea, Human Rights Watch said today. The UN says a spill would have catastrophic environmental and humanitarian consequences, including destroying livelihoods and shutting down the port of Hodeida, a lifeline for millions of Yemenis who depend on commercial imports and humanitarian aid.

The aging tanker, known as “the Safer” and owned by the Yemeni state-run Safer Exploration and Production Operations Company (SEPOC), has been stranded 5 nautical miles off Yemen’s coast and 32 nautical miles from Hodeida since 2015. In late May 2020, seawater entered the tanker’s engine compartment. While divers temporarily fixed the leak, the incident has heightened concern about the risks of an oil spill. In early July, the Houthis, who control the area, said they would allow the UN to carry out an assessment mission, but as of July 24, the UN had not received the necessary permits for its staff to board the tanker. UN attempts in 2019 to obtain permission failed.

“The Houthi authorities are recklessly delaying UN experts’ access to the deteriorating oil tanker that threatens to destroy entire ecosystems and demolish the livelihoods of millions of people already suffering from Yemen’s war,” said Gerry Simpson, associate crisis and conflict director at Human Rights Watch. “The UN’s top experts are on standby to prevent the worst and should immediately be allowed on board the vessel.”

The storage tanker holds an estimated 1.1 million barrels of crude oil – 4 times as much as spilled during the catastrophic 1989 Exxon Valdez disaster. A 430-kilometer pipeline connects Yemen’s oil fields in Marib governorate to the tanker. Oil was previously transferred from the tanker to other vessels for export, until the Houthis took control of the nearby coastline in early 2015.

Yemen’s conflict involves a Saudi-led coalition, which backs the internationally recognized Yemeni government, against Houthi forces, who control much of northern and central Yemen, including Hodeida. The conflict and a decade of political and economic crisis have turned the country into what the UN says is the world’s worst humanitarian crisis. Yemen relies on commercial imports and aid for between 80 and 90 percent of its basic needs, about 70 percent of which enter the country through Hodeida.

Since 2015, SEPOC has been unable to afford maintenance costs for the tanker, resulting in corrosion and a dangerous build-up of potentially flammable gases. Experts say the lack of maintenance since 2015 has irreversibly damaged the ship.

On July 15, 2020, the UN warned of a risk of an explosion that could spill most or all of the oil into the Red Sea. The same day, the head of the UN’s environmental agency highlighted the likely harm an oil spill would cause. It said a spill could destroy Red Sea ecosystems on which almost 30 million people depend, including at least 125,000 Yemeni fishermen and 1.6 million people in their communities who already depend heavily on humanitarian aid.

The UN also said a spill would destroy 500 square kilometers of agricultural land used by about 3 million farmers, 8,000 water wells, and create harmful levels of air pollutants affecting over 8 million people. And it said that a spill would close the Hodeida and Saleef ports for up to 6 months, which would seriously affect Yemen’s capacity to import 90 percent of its food and other essential aid and commercial commodities.

Others have pointed to the risk a spill poses to Saudi Arabia’s desalinization plants, on which millions of people depend for drinking water. A spill could also cripple one of the world’s busiest commercial shipping routes through the Red Sea, which accounts for about 10 percent of world trade.

The UN Environment Programme reported that the age and condition of the Safer means the safest option to secure it would most likely involve removing the oil, towing the tanker to a secure port, and dismantling it in an environmentally sound way.

Responding to an oil spill involving the Safer would be an especially daunting challenge. The tanker is located near one of the world’s busiest shipping lanes on the edge of a war zone. A rapid cleanup operation would involve complicated regional political dynamics and most likely delays from Covid-19 measures.

The impact of an oil spill on livelihoods, access to water and food, and on fuel prices could significantly exacerbate the humanitarian crisis in Yemen, Human Rights Watch said. The UN has presented the Houthis with evidence that an oil spill from the tanker would destroy the livelihoods of fishermen and others on whom millions of people depend for food.

The Houthis should act to protect the human rights of everyone on territory they control, including the right to life, to an adequate standard of living, to health, and to food and water. Under international humanitarian law, they have an obligation to facilitate the delivery of humanitarian assistance to populations at risk.

On June 29, the UN Security Council called on the Houthis “to immediately grant unconditional access for United Nations technical experts to assess the tanker’s condition, conduct any possible urgent repairs, and make recommendations for the safe extraction of the oil.” Two weeks later, the UN humanitarian chief, Mark Lowcock, raised concerns with the Security Council about the Houthis’ long-running “bureaucratic minuet” and their broken promises to the UN to allow its experts permission to board the Safer.

The Houthi authorities should urgently issue permits to members of the UN assessment team, facilitate their access to the tanker, and follow the UN’s recommendations on securing the tanker and its oil.

Iran, which has supported the Houthis and which transports significant amounts of oil through the Red Sea each year, should encourage the Houthis to cooperate with the UN. Regional states, including Djibouti, Egypt, Eritrea, Jordan, Oman, and Saudi Arabia, should work closely with the UN to identify ways in which they can help convince the Houthis to cooperate. The UN Security Council should inform the Houthis that a failure to promptly address the issue could result in additional targeted sanctions.

“Governments concerned about Yemen’s humanitarian crisis should recognize the danger the Safer tanker poses and press to avert further tragedy,” Simpson said. “The Houthis’ continued refusal to allow UN access could result in devastating consequences for the environment and people across Yemen and the wider region.”

Can an environmental catastrophe in Yemen be averted? | Inside Story