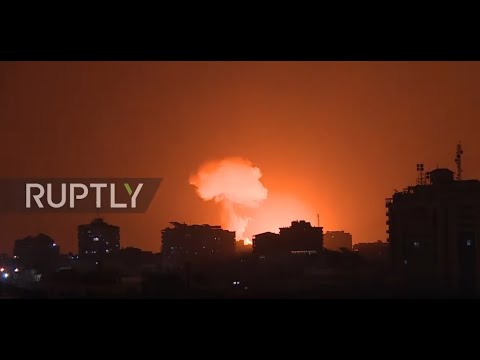 Gaza’s two million residents have become accustomed for the past 20 years to Israeli air strikes, ground incursions and naval attacks. In fact, the besieged coastal enclave has become an experimental field where Israel’s latest technology and military arsenal including deadly drones are used. Fear and panic have become the norm as the sound of explosions and blasts rock the 40-kilometre Strip.

For the past seven days, aerial strikes targeted different military training sites and security observation posts in the Gaza Strip, which has been under Hamas’ control since 2007. Tanks and navy warships take part in the frequent offensives, which also give new soldiers a chance to put what they learnt into action in a real battlefield, targeting the “enemy”.

To put things into perspective, the latest military escalation in Gaza, according to Israel, is “in response” to incendiary balloons released by Palestinian civilian activists (with the help of the sea breeze blowing from west to east toward the Israeli controlled areas) which cause fires when they land on crops and in agricultural fields. Kites were originally used with fuel doused sponges which had been set alight attached to them, but the use of balloons took over as they are cheaper and take no time to make. The balloons normally lead to bush fires, requiring fire engines and even aircraft to extinguish them. It’s a nightmare that costs millions of shekels in damages and losses to Israeli farmers.

This is “popular resistance” or “non-violent resistance” according to Palestinians who are working to pressure Israel to lift its ongoing siege. The blockade – a form of collective punishment – was imposed in response to Hamas winning the parliamentary elections in January 2006 and the abduction of Israeli soldier Gilad Shalit in the summer of the same year. Shalit was captured by Hamas in a cross-border raid via tunnels near the Israeli fence. When Hamas took control of Gaza from Fatah, as a result of its success in the election, the siege tightened.

“Nightly confusion” is another technique used by activists, with tyres being burnt and fireworks and explosives being set off along the fence separating Israel from the enclave. This “noise confusion” aims to disrupt the daily lives of Israeli soldiers positioned along the fence, as well as Israelis living near Gaza. The fires trigger powerful blasts and fill the sky with acrid smoke. These two popular resistance activities had ceased functioning in recent months as both Israel and Hamas reached an unofficial ceasefire agreement, but resumed over the past eight days to send a message to Israel that the cost of calm and tranquillity along the fence is the full lifting of the prolonged suffocating strangling siege, which has transformed Gaza into the world’s largest open air prison and brought life and economic activities to a standstill.

In the past, drone attacks were used against those activists to deter them, but it seems the army of jobless youths feel they have nothing lose; life has no taste for them. The majority have never left Gaza, been on a plane or train or experienced other cultures. Even the occupied West Bank isn’t within reach for them, neither are their ancestral lands in historic Palestine and Jerusalem. Alleviating the endless suffering of Palestinians in Gaza who have been subjected to three devastating Israeli wars in late 2008, late 2012 and mid-2014 is necessary in order to restore calm and hope.

No doubt internal differences and division between the two major political factions Fatah and Hamas, fuelled by Israel, contribute to this acute, complicated problem and it is indeed shameful.

Palestinian lands have been occupied by Israel for decades now even before the founding of those factions, and in fact they were established to resist the occupation. They have tried all available means of resistance in the hope that Israel ends its occupation but to no avail.

Israel is known for its policy of buying time and chooses when to open or close the tap, allowing and banning goods as well as “duel usage items” such as cement, balloons and tyres. In response to the two means of non-violent tactics, Tel Aviv has decided to stop the delivery of industrial diesel needed for Gaza’s only electricity generating company. According to Palestinian officials this led to the power plant shutting down today, with health officials warning of disastrous consequences on the health sector, especially chronically ill patients, in ICU and newborn babies in incubators. Moreover, Tel Aviv decided to close off the fishing zone along Gaza.

In an attempt to defuse the tension and avoid a possible major escalation that normally involves firing of long range home-made projectiles and missiles from Gaza into Israel, an Egyptian delegation has been shuttling to meet officials in the besieged Strip to convey their demands to Tel Aviv, namely lifting the siege, allow Qatari grant funds to reach Gaza, increase the fishing zone, open Karm Abu Salem commercial crossing located on the Gaza-Israel-Egypt border, improve the electricity and water services and increase the number of permits for Gazan traders and merchants entering the West Bank and Israel via the Israeli controlled Erez crossing.

Egypt’s role stems from the fact that it wants to maintain its position as mediator since it shares its border with Gaza and as a result of it being the first Arab country to strike a peace deal with Israel in 1979, but also to emphasise that it is an important key player in the region especially after the UAE and Israel signed a normalisation deal last week.

The “resistance balloons” continue to be sent across the fence, and Israeli officials, including Defence Minister Benny Gantz, have renewed their threats to “protect Israeli security sovereignty without any concessions”.

But Gantz, Netanyahu and others know for sure that Gazans have nothing to lose as life is unbearable under the ongoing 14-year siege, while peace on Israeli terms is a mirage.

Yousef Alhelou is a Palestinian journalist and political analyst based in London. He has been covering the Palestinian-Israeli affairs since 2005 and reported on the Israeli wars on Gaza in 2008 and 2012 as well as other major events. He got MA in International Relations, and currently a PhD candidate focusing on media and colonialism. He is a former Reuters journalist fellow attended Oxford University and a United Nations alumni.