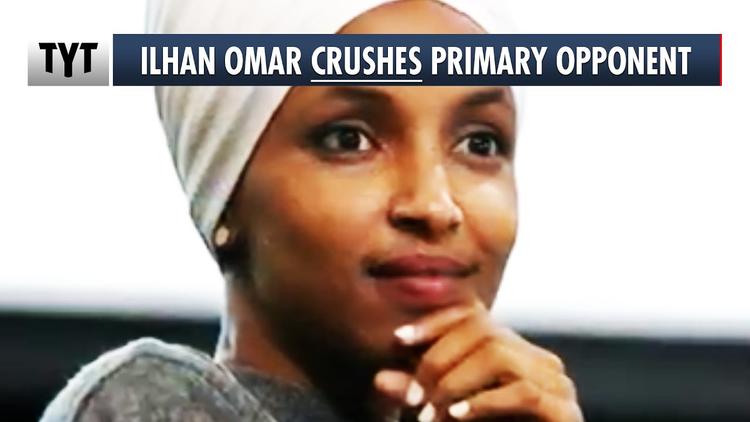 Ann Arbor (Informed Comment) – Ilhan Omar handily won the Democratic Party primary for Minnesota’s 5th District, encompassing Minneapolis and some of its suburbs. Indeed, she improved her margin of victory over 2018, winning by 57% to 39% for her rival, Antone Melton-Meaux, whose campaign was funded in part by a usually pro-Republican organization of the Israel Lobbies. In 2018 the field was more crowded, and she won by 48% to her main rival Margaret Anderson Kelliher’s 30%.

Azad Essa at Middle East Eye reports that “Melton-Meaux receive[d] most of his funding from outside the district, funding records show that more than 20 percent of his funding, or around $530,000, has come via NORPAC and Pro-Israel America, two political action committees and staunch backers of Israel.”

In some quarters Melton-Meaux out-raised her in funding by a factor of six.

The Israel lobbies have often succeeded in unseating congressmen who questioned Israeli Apartheid policies toward Palestinians, but they have suffered several humiliating setbacks in the past two years, as a new breed of progressive Democrat has appealed over their heads to the grass roots. Jamal Bowman defeated pro-Israel stalwart Eliot Engel in New York’s 16th district in July. Cori Bush just won in St. Louis despite backing the Boycott, Divestment and Sanctions (BDS) movement against Israeli Jim Crow policies. BDS is a plank in the platform of the Democratic Socialists of America, to which many of the new wave progressives belong. (Ilhan Omar, however, is not DSA, and some progressives, such as Ayanna Pressley, oppose BDS).

According to David H. Montgomery of Minnesota Public Radio, Omar bettered her results in 214 of 234 precincts, declining in only 20.

What were the 20 precincts where she did not do as well as two years ago? According to Montgomery they were “the district’s most affluent neighborhoods, in Edina and the Southwest and Calhoun Isle neighborhoods of Minneapolis.”

In other words, Omar gained increased support except among rich, corporate Democrats, who were unable to sway others against her.

On the other hand, she did well in many well-off surburbs.

Montgomery at MPR broke down the voting patterns. Omar won almost everywhere in the city. She greatly improved on her 2018 showing in minority neighborhoods (she had had more Black rivals the last time). She won working and middle class white neighborhoods.

The inequality gap between whites and African-Americans in the city is among the worst in the country.

Although Omar is considered controversial inside the Beltway (i.e. by people representing corporations rather than the people), she is popular in her heavily Democratic district, which had voted for Hillary Clinton over Trump by 73% to 18% in 2016.

Given that Minneapolis was ground zero of the nation-wide Black Lives Matter protests this spring-summer that were provoked by the killing of George Floyd by Minneapolis police officers, it is likely that public indignation over that murder played into the Democratic primary.

“On law enforcement, Melton-Meaux told the Editorial Board regarding the death of George Floyd: “I’ve had my own issues with police, even being detained as a law student by two white officers. I know that could have been a knee on my neck but for a few circumstances.” But instead of Omar’s calls to defund and even dismantle the police, Melton-Meaux would work to create a system in which police are held accountable for their actions.

On health care, Omar and Melton-Meaux both support universal coverage. How they get there differs. Omar supports the purist proposal championed by Sen. Bernie Sanders that would dramatically shift the entire system to the federal government. Melton-Meaux more pragmatically builds on the Affordable Care Act by embracing the logical next step, a public option that would offer a government-run insurance program for consumers to voluntarily choose.”

In other words, Melton-Meaux does not want to do any serious restructuring of policing in Minneapolis and he does not actually want universal health coverage, since the Affordable Care Act does not and will not provide it, no matter how it is tweaked.

In contrast, the Minneapolis city council voted in June to establish what it called a “holistic” public safety force it called a Department of Community Safety and Violence Prevention.

And, remember that in 2016 Bernie Sanders, a champion of medicare for all, swept the presidential Democratic primaries in Minnesota. I guess the good people of Minneapolis rather like the “purist” proposal.

Although the Israel lobbies put a lot of money into defeating Omar, the issues on which she won, of progressive policing and health care, were largely disconnected from the geopolitical ones where her straight talk had attracted so much vitriol to her.

For someone who had been in a refugee camp in Kenya for 4 years as a little girl before coming to the US, one supposes that some harsh campaign ads held few horrors, and she continues to show spunk and to stand up for what she thinks is right. Minneapolis applauded her.