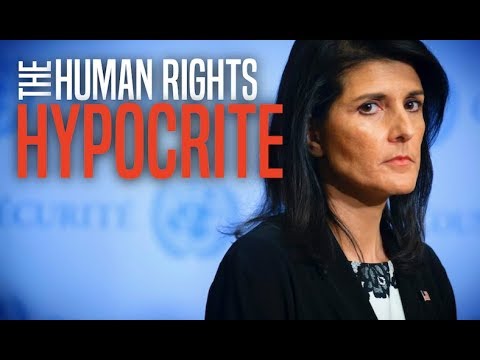 US Ambassador to the United Nations Nimrata “Nikki” Singh Randhawa Haley on Tuesday walked out of the chamber when the Palestinian ambassador began to speak. Palestine, like the Vatican, has non-member observer state status at the UN. You’re not a very good diplomat if you won’t even listen to what one of the parties to a dispute has to say.

Ironically, Ambassador Haley has a great deal in common with the Palestinians she despises. Haley seems to be a syncretic Sikh-Christian now, but was brought up in the Sikh religion that originated in medieval north India. Sikhism has some family resemblances to both Hinduism and Sufi Islam but is best thought of as an independent tradition. Sikhs are largely Punjabi speakers, though some speak Hindi. In modern India they have often felt discriminated against by the Hindu majority and there have been several periods of unrest.

Independent India in 1947 inherited from the British Raj a state of (east) Punjab that was multi-cultural. The Akali Dal Party successfully lobbied in the 1960s for a Sikh majority state of Punjab, with Hindu Punjabi and Hindi speakers being hived off into Haryana and speakers of rural dialects into Himachal Pradesh. It would be interesting to know how her parents thought about the Sikh demand for statehood.

The tripartition of the former east Punjab state caused a problem in that the whole state had Chandigarh as its capital. Chandigarh is really nice–I’ve been there. It was designed by the French-Swiss architect Charles-Édouard Jeanneret, known as Le Corbusier. Post-1966 Punjab and Haryana both wanted it as their capital. The Indian government reached a compromise such that the city is the capital of both states. That sort of arrangement is what Palestinians propose for Jerusalem, a proposal rejected by Prime Minister Binyamin Netanyahu and also by Nimrata Haley. Does she think Haryana should be kicked out of Chandigarh, too?

A small movement of Sikhs is still not happy and wants independence. This movement includes Khalistan. A disgruntled Sikh nationalist serving as her bodyguard assassinated Indian Prime Minister Indira Gandhi in 1984, setting off days of anti-Sikh riots and pogroms in New Delhi, which has a significant Punjabi immigrant population. A Sikh was convicted of a 1985 downing of an Air India flight, which killed 329 persons.

Amb. Haley’s family name is Randhawa. Obviously, that is a big group with all kinds of members. Some, back in India, are members of the establishment Congress party. But some belong to the more Sikh-centric Akali Dal Party. Some may be Khalistanis. Even the most establishment members of the Randhawa clan would likely agree that Sikhs are widely discriminated against. A Paramjit Singh Randhawa, a Canada-based businessman and supporter of World Sikh Organisation (WSO), for a long time was excluded from India on (possibly unfair) suspicion of separatist sentiments. He may not be a relative of Nimrata “Nikki.” India continues to be worried about Sikh extremism in Canada.

1. So the first resemblance between Haley and the Palestinians are that both come from groups that are minorities and face discrimination from the majority. Sikhs, like Palestinians, organized around a demand for statehood and succeeded in getting a Sikh-majority Punjab state in Federal India. Palestinians also want a state, and if they get one at all, it is now likely also to be in federation with Israel.

2. Haley’s father and mother, Ajit Singh Randhawa and Raj Kaur Randhawa came to North America in the 1960s, he to do a post-doc in Canada. In 1969, they ended up in Bamberg, South Carolina, where Professor Randhawa taught a historically Black college. Haley’s sister Simran told this story:

“My parents were trying to rent a home in Bamberg and the same physician so kindly tried to help. He found a wonderful small home and we moved in. That night he returned to take back the keys as the owners did not want an Indian family renting their home. He found us a second home and we moved. The next night he was back. Once again we were being evicted because of our brown skin. He finally found a third home for us. It was owned by the mill. We would be allowed to live there on three conditions: 1- We had to buy the house and sell it back to the mill when we moved., 2 – We were not allowed to have any alcohol on the premises. 3 – We were not allowed to have people of color at our home. We moved in that evening.”

So the second resemblance is that the Randhawas, like Palestinians in the Occupied West Bank, faced forms of housing discrimination and were kicked out of their home for their identity.

“The beauty pageant story was also of significant impact. Both Nikki and I were in Little Miss Bamberg. However, unbeknownst to our parents, only a black and white queen were selected. We were neither. Just before intermission, Nikki and I were called up on stage, thanked for participating, told we were being disqualified and given crayons and a coloring book as the music began to play.”

That is a third resemblance between Nimrata Haley and the Palestinians. She was excluded from the pageant for being neither Black nor white. Palestinians are also in limbo, having no state identity and being neither Israeli nor any other recognized nationality.

But of course, the Indian-American from an immigrant family (did they come on a H1-B visa of the sort Trump is attempting to get rid of?) has done whatever she can to escape her past. She adopted Christian Zionism if not all the appurtenances of Evangelicalism. She threw in with the anti-immigrant, white nationalist Trump administration. And now she is delighting in helping crush the Palestinians the way Indian Moghul Emperor Aurangzeb crushed her Sikh ancestors. She even tried to whitewash Trump’s history of sexual harassment. Trump’s one-time campaign manager, Steve Bannon, once went to Silicon Valley and noticed all the Indian-American software engineers, and is said to have wondered, “Why are these people here?” Nimrata has attempted to escape her own subalternity in order to pretend to be part of an elite that will never really accept her.

When she turns her back on the Palestinians, Perhaps she is trying as hard as she can to turn her back on herself. If so, that act of the reinvention and disguise of the self requires viciousness toward all who remind her of her own marginality.