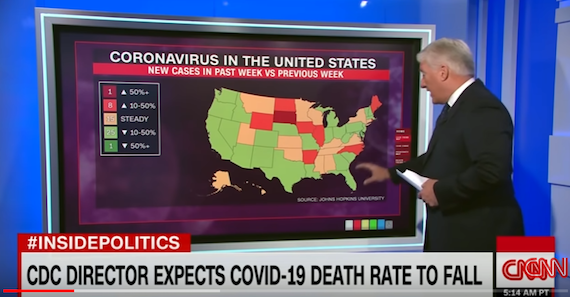 Ann Arbor (Informed Comment) – The Republican National Convention wants the pandemic to be in the past. It isn’t. Cases are up almost 1 percent this week. We still have over 40,000 new cases daily, down from a peak of 70,000 in mid-July. Some of the decline is a result of less testing, connived at by the Trump administration. It isn’t true that if you test more you have more cases, but it is true that if you test less you have more cases you do not know about. But 42,000 or 30,000 or 20,000 new cases a day is still a world-shattering catastrophe. And the deaths.

That is over half of Wyoming’s population.

So imagine a rogue state fired a missile at Wyoming with a warhead that could take out half the state’s people.

And imagine that the US had an anti-missile missile that could hit the incoming projectile in mid-air and avert those deaths.

Imagine that Trump was briefed on the situation and was asked if he wanted to deploy the missile shield.

And he says, naw, I’m going to go play golf. Anyway, Wyoming’s security is Wyoming’s problem. Except if they had uppity minorities, then I’d send in the Feds. But they don’t. So screw’em.

And let us say that the missile hits and kills 300,000 people; half of the state of Wyoming is gone.

All this is the equivalent of what Trump has done to us.

The Trump administration faltered in rolling out a national testing ability last winter. Trump closed down the country too late and opened it too soon. Other countries wrung most of the virus out of the system quickly last spring. America did not. Trump discouraged mask wearing, which accounts for much of East Asia’s success in dealing with the virus. Trump never provided a national corps of contact tracers. In fact, there has been almost no national response at all. Everything was dumped on the states, which were made to compete with one another for reagents and PPE, driving up the costs.

We still don’t have a rapid and effective testing capability. We have 4% of the world’s population and 25% of cases and 20% of deaths.

Trump troglodytes even dare spin the last statistic, ghoulishly leering that we have a low death rate per infection in world terms. Yes, but we’ve had nearly 180,000 deaths in absolute numbers. Other industrialized democracies have had a fraction of that, proportionally.

Opinion polls show that Americans have no clue as to what they are facing. And it is not only because of White House propaganda but because our television news is not very good.

For my sins, I watch a lot of cable television news. And I am ticked off by the way, e.g., John King at CNN reports on the novel coronavirus pandemic. CNN has a color coded map showing whether cases increased or decreased. It also leads with whatever nonsense the Trump White House has just shoveled at us from its large pile of horse manure.

Here’s what I mean:

King begins the segment by saying, “The White House is promising a major breakthrough in the coronavirus fight.” King goes on to admit that he has no idea what the White House was talking about. (Hint: there was not actually a breakthrough in the coronavirus fight.) King gave Trump free publicity for a piece of positive fluff. If Trump gets reelected, this is how it will happen– because television news lets him play them like a fiddle.

King goes on to say that the Centers for Disease Control said early last spring that the danger to Americans of the virus was low, and he pointed out that we’re on the verge of having 200,000 dead, so that the danger is now great.

But, why does he phrase it in terms of the CDC? The scientists were just giving their best estimate on that day, which they quickly revised.

Why isn’t it worthwhile pointing out that Trump said it was like a flu, that it would go away by April, that at most there would be 60,000 dead? Whether he meant to or not, King displaced the underestimate onto the CDC, which doesn’t have executive control over the virus response, from the president, who does.

So now Trump has been allowed to claim a “breakthrough” and his low-balling of the American public on the seriousness of the pandemic has been obscured.

Then King shows this stupid map:

He says with his lips that despite only 9 states showing an increase in coronavirus cases that day, the over all news is not good.

I want to underline that King is a veteran and good reporter and expresses horror every day at the mess Trump has gotten the country into.

But look what is on his screen. The chyron is saying that the CDC director expects deaths to fall (because cases are falling from 70,000 a day to 42,000 a day, and deaths should also decrease with a two-week lag).

The chyron is saying “deaths going down, good news.” On top of the “breakthrough.”

And King’s map is contradicting his cautious words about the coronavirus situation still being very bad even if there is some improvement.

The map is only interested in plus or minus changes in cases per day. The green shows cases decreasing, and it dominates the map.

Of course, there is the pesky problem of some states increasing, but there are only 9 of them.

The problem with the map is that daily plus or minus is a stupid metric, and this idiotic graphic set-up completely undermines all King’s painstaking reporting.

So Florida yesterday had 3,320 newly infected people and 155 deaths. Since both these numbers are lower than the day before, Florida gets to be green on the map, flashing “optimism.”

But the numbers are no reason for optimism or a feel-good green on the map.

Italy’s cases spiked up to 876 on Tuesday. Italy’s population is about 2.5 times that of Florida. So that is 350 cases in Florida terms.

Italy’s worrying spike of an equivalent of 350 cases is a little over one-tenth of feelgood green-on-the-map Florida’s. And deaths? Italy’s deaths are in single digits daily. In Florida terms, you’d have to say one or two.

In Florida, an airliner worth of people are dying every day, 155 on Wednesday.

So the green Florida on the map is completely misleading and unwarranted.

How about we color code US states as a percentage of cases and deaths of some normal country like Italy, and show the whole effing country as flaming deep red while the rest of the world except Brazil, Iran and India are yellow or green?

Every state in the country could reduce cases and deaths by 1 per day every day, and CNN’s map would show them all a comforting green from now to election day.

Small percentage improvements on a pandemic catastrophe are no way to measure our situation.

We still have about 1,000 Americans dying every day. That is a 9/11 every three days. And this is five months in.

There is no green on our map, but our media is letting Trump get away with claiming there is. And if CNN is like this, imagine the way Fox has covered the heavy odor of horse manure wafting from the White House with a tasteful whiff of potpourri and lavender.

This is journalistic malpractice.