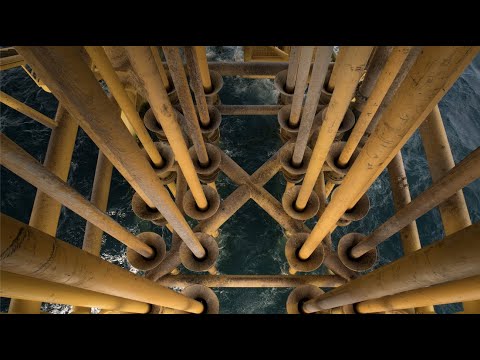 Ann Arbor (Informed Comment) – Ashton Nichols at The Dallas Morning News reports that ExxonMobil lost over $1 billion in the second quarter, up from a $600 million lost in the first. Year on year, its revenues are down 33% for the first half of this year. It has been forced to close down half its fracking rigs in the Permian Basin. In recent years, the company is responsible for 124 million metric tons of carbon dioxide emissions annually and it is one of the biggest polluters in the world, helping wreck the planet.

Nichols quoted senior vice president Neal Chapman as saying, “Absolute demand fell to levels we haven’t seen in nearly 20 years. We’ve never seen a decline with this magnitude and pace before, even relative to the historic periods of demand volatility following the global financial crisis as far back as the 1970s oil and energy crisis.”

Chevron did even worse, losing a whopping $8 billion.

The oil companies have a lot of debt, and the debt is secured in part by their oil fields, which themselves are suddenly worth a lot less, so Chevron for instance has had to do big write-downs.

Oil prices have been artificially brought back up to $40 a barrel from a low of $16 a barrel by a cartel effect. That is, OPEC plus agreed to cut production substantially in June. That agreement, however, lapsed on July 1, and in the past month the 13 OPEC countries put out an extra million barrels a day.

The specter of over-supply, and the real possibility of a fall “Second Wave” of the coronavirus, leading to more shutdowns of economies, make it unlikely that Big Oil will get out of the red this year.

This crisis is a foretaste of what is coming when electric cars take off in the consumer market, something that will happen through the 2020s. Just so we’re clear, electric cars either use no gasoline or, if hybrids, don’t use very much. I drove a Chevy Volt for 3 years, powered it off the solar panels on my roof, and almost never put gasoline in it. The new Bolt is a much better car with much greater range, and things will go on improving in the next couple of years.

Analysts PwC and Strategy& see signs that the coronavirus crisis has accelerated the move to electric vehicles in Europe. Governments have put in substantial tax incentives to buy an EV, and people are more environmentally conscious. Europe’s carbon disincentives are also driving companies such as Volkswagen to go into EV production with both feet.

About 8 percent of passenger cars bought in Europe this year have been plug-in hybrids or purely electric vehicles, up from 3.6 percent in 2019 (and that was up 220 percent over 2018). This was so even though Tesla sales, for instance, were limited by the spring shutdown in California. Renault’s Zoe has now sold 300,000 vehicles.

Driving an EV will become more and more convenient. The Spanish government is putting in 8500 EV charging points, 2,000 of them this year.

If you have Big Oil stocks in your retirement portfolio, you really should reconsider.

ExxonMobil has known about the catastrophic effects of using its product for decades, and has spent tens of millions of dollars to muddy the waters and discourage people from giving up gasoline. It also engages in greenwashing, pretending to be working on renewable energy or the (non-existent) carbon capture, when in fact only 1% of its profits go toward such research. ExxonMobil executives and flacks are committing premeditated inter-generational genocide.

Carbon dioxide is a powerful heat-trapping gas. Ordinarily, the earth is heated when sun rays strike it, but then much of the heat radiates back out to space. Carbon dioxide and methane gases trap the heat and keep it on earth. This process is cumulative. The earth has already heated up in the past century, and it will go on up from here. The average temperature of the earth will increase by anywhere from an average of 3 degrees Fahrenheit to 15 degrees Fahrenheit, depending on how much more gasoline, coal and other hydrocarbons we burn. The oceans are deep and cold and so are the poles, so an average increase of 15 degrees F. could translate into much more in any particular place. It is estimated that the average temperature in Phoenix is heading to 114 degrees F in a few decades. That means some days it will be less than that, but some days it could be an unlivable 125 degrees F. Global heating will also make hurricanes more powerful, and will cause the sea to rise, destroying trillions of dollars in seaside property around the world. Miami is living on borrowed time, as a result.