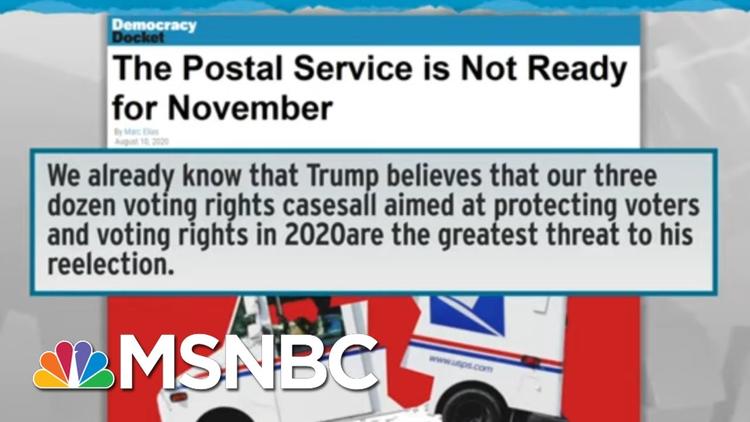 Boise, Idaho (Special to Informed Comment) – While we may have become inured to Donald Trump’s assaults on the Constitution and necessary institutions of government, his two recent attacks are existential threats to our democratic republic.

First is his attack on the Postal Service (USPS). He withheld CARES Act funds for USPS losses caused by the pandemic, leaving it short of funds to operate. He also appointed as Postmaster General an unqualified campaign donor with an 8-figure investment in private USPS competitors. Louis DeJoy set about destroying the USPS by instituting rules and processes to slow delivery of mail, by firing or pushing aside top professional managers, and most recently by removing mail sorting machines from processing centers without explanation, which immediately cause massive backups. These measures have greatly diminished the capacity of the USPS to deliver mail in a timely manner.

There are two reasons for Trump’s assault on the USPS. First, he has long wanted to privatize its functions. More importantly, he purveys the lie that absentee voting does not work, setting up an argument for himself in case he loses the election due to late-counted, but valid, absentee votes. By damaging the USPS’ capacity to timely deliver ballots to voters and return them to polling centers, he will increase chaos and delays to cast doubt on his loss of the election, particularly if lost by votes counted after election day. This creates a risk that he will cling to office by invalidating ballots or by unsubstantiated claims of voter fraud.

There is time to prevent this undemocratic outcome, but only if Congress acts. This includes Republicans in Congress who care more about the Constitution than staying in the good graces of a wannabe authoritarian leader. Because the Barr DOJ will not pursue violations of law by the administration, it is left to Congress to act on DeJoy’s slow-downs of mail service and gutting of leadership of the USPS. Not only are the slowdowns and destruction of leadership contrary to his remit to manage the USPS properly, but they violate federal law, specifically 18 USC Sec. 208(a), which makes it a crime for DeJoy to act in his government capacity to benefit his own financial interest, i.e. his investments in USPS competitors. His degradation of USPS’ performance gives competitive advantage to those entities, so works to his personal financial advantage, which is prohibited by federal law. Congress should act expeditiously to remove DeJoy from office pursuant to Article II, Section 4, of the Constitution.

The second assault is upon the census mandated by Article I, Section 2, clause 3, of the Constitution. It is critical to accurately count all people. The most important reasons are that (1) apportionment of House seats and presidential electors among the states, and (2) disbursement of federal benefits among the states, are determined by the census.

After the disruptive effects of the pandemic became clear, the Census Bureau extended the deadline to October 31 to ensure an accurate count. Then, on August 3, the Trump administration announced that the deadline would be moved up to September 30. This came when the 40% of the population who are most difficult to count had not yet been contacted. The consequence will be an undercount. The Constitution mandates the count of all people, so Trump’s action to cut the census short is contrary to Constitutional intent. Because time is of the essence, and the interests at stake (apportionment and state benefits) belong to the states, one or more states should bring an original action before the Supreme Court as permitted by Article III, Section 2, of the Constitution.

Action against assaults on the USPS and undercutting of the census must be taken without delay. Nothing less than the survival of our Constitutional government is at stake.