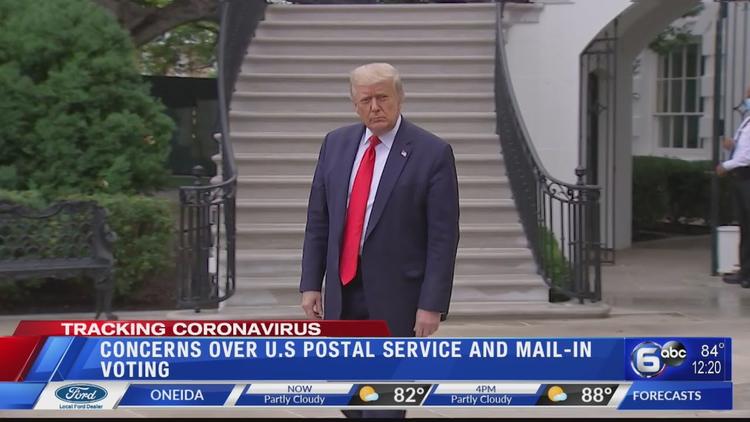 ( Waging Nonviolence ) – I’m hearing a range of views on the likelihood of President Donald Trump refusing to leave office if Joe Biden wins in November. Some don’t believe that even the reckless Trump would go that far, no matter how messed up mail-in ballots become and how close the vote is. Others point out that Trump has surprised observers again and again with bizarre behavior, doubling down even on nonsense regarding COVID-19. And he’s stated numerous times his envy of other heads of state who’ve been appointed president for life.

Fortunately, we needn’t agree that a Trump coup attempt is likely in order to prepare for the possibility. We can think of it like insuring a house, not because it’s likely to catch on fire but “just in case.”

Actually, a plan against a coup is better than insurance, as it can reduce the chance that we’ll face a coup attempt. The better prepared we are to counter it, the more likely that wiser heads in the Trump camp will realize that a coup is futile, and not attempt it.

There are many aspects to preparation, and they include developing an overall strategy, a handy list of tactics that are mutually supportive and a communication network. It will help to train as many as possible because at a time of crisis, people look to the “early responders” for a way forward.

The more that preparation is informed by research, the better. Donald Trump may scorn evidence-based conclusions, but most of us actually believe rationality is a good thing. Fortunately, some researchers have already found out how people in other countries handled coup attempts.

In 2003, Bruce Jenkins worked with nonviolence studies founder Gene Sharp to analyze the most important features of successful defenses against a coup. The authors suggested specific preparations activists and social institutions can make ahead of time to be ready.

Most recently, in 2017, political scientist Stephen Zunes studied 12 attempted coups around the world since 1958 and found that eight were defeated by nonviolent resistance. He then examined what made the difference between those eight victories and the four where the people lost.

Altogether, the research shows that the best strategies are the ones that make the most of our strengths and the opponent’s weaknesses. At the same time, it’s clear that we also need to fix our own weaknesses, if we can, and get ready to handle the strengths of the opponent.

What we have going for us

We’ve recently seen enormous numbers of people in motion: Black Lives Matter, action for climate justice, the immigrant rights movement, the movement to end gun violence, teachers and other workers’ strikes, rent strikes and more. The studies of successful resistance to power grabs find that where the people won, large numbers were willing to participate in direct action. Many in the United States have already shown their readiness to act.

Another strength we have here is that political power is not highly centralized. The federal system gives states, and even cities and towns, some flexibility. Trump unwittingly reinforced that flexibility through his irresponsibility in dealing with the pandemic. The states that wanted to had the ability to take over public health management, and many cities did as well.

States have been stepping up in other areas. To Trump’s horror, California famously went its own way on auto pollution control measures, with other states joining it. Combinations of states are frequently in federal court on multiple issues. States and cities have defied Trump’s war on immigration.

The recent Portland example — where the state intervened to get Trump to pull back federal troops — shows the usefulness of popular nonviolent pressure. Such action has the ability to motivate power centers near the grassroots to assert themselves.

Oregon Gov. Kate Brown may have been quick to issue a statement opposing Trump’s attack, but it was grassroots pressure extending “beyond the choir” of the usual Portland street activists that enhanced her power in the subsequent negotiation. If the fires and projectiles of some protesters in front of the courthouse had been the only story, Brown’s negotiating power would have been weak or nonexistent. The larger picture was always the mass nonviolent action — as described by the mainstream media — which continued to grow as the confrontation continued.

Even though the large influx of local white allies brought a problem as well (shifting focus away from Black Lives Matter to defending against Trump’s attack), movement growth always brings problems. In fact, the history of social movements shows that one job of movement leadership is to solve problems as they come up, confident that new problems will continue to emerge as growth continues. Bigger movements face bigger problems, and a mass revolutionary movement will face the biggest problems of all.

While the tendency is often to complain when problems appear — and then criticize instead of solve them — life for movements is, in that way, the same as life for individuals. As author and activist adrienne maree brown might put it: power comes with learning to meet our challenges with “emergent strategy.”

In any case, one lesson from Portland’s experience is that it can be useful, when the feds attack, that other centers of legitimate power exist. And that’s only one of many strengths movements possess.

What’s special about a coup

Activists are used to spotlighting problems that have been around for a while — such as fossil fuels, inadequate schools or cash bail — and developing campaigns to take them on. But it may take a while to pull the pieces together in order to wage a vigorous campaign.

Waging Nonviolence depends on your support. Become a sustaining member today and receive a gift of your choice, including this book!

What else works to defeat a power grab?

In addition to widespread participation in direct action and building alliances, Zunes found it was effective to flat-out refuse to recognize illegitimate authority. That can be difficult for many — not just politicians — whose careers have depended on their negotiation skills. They may think they can temporize and negotiate their way through the next “hard patch.”

What works is the opposite, Zunes found. Refusing from the outset to recognize the authority of Trump’s claim to office — or the authority of anyone who answers to him — is key. The more public the refusal, the better, because it stimulates others to do likewise. For example, the immediate start of a general strike of government workers, powerful by itself, would also be a signal to everyone else to act.

When? The sooner the better, because case studies suggest that coups are weakest in their first hours and days. After all, the plotters know they are taking a big chance, and they have no guarantees of success. Trump’s success depends on others complying, but will they?

One tactic for accelerating resistance and building confidence would be to circulate a “pledge of resistance,” in which people sign on to the pledge to resist if the unexpected happens and Trump refuses to leave office. Unionized workers have an advantage: They can get a resolution of that kind passed in their union.

That doesn’t mean Trump can only be defeated through swift action. Some coups were defeated after protracted struggle. So, a slow start is no reason to give up — it’s just simply to our advantage to act quickly.

Most Americans will be surprised, even shocked

Most Americans will of course be initially surprised by an attempted coup, as has been the case with Trump’s previous deviations from the norms of expected presidential behavior. Bold activists will become the “first responders.”

Such activists are legendary for running toward disaster while others are running away. They are people who accept risk in extraordinary situations.

In the attempted Russian coup in 1991, people climbed on the barricades and faced tanks even though they believed an attack was coming and that they might well be killed.

As Taylor noted in his manual, women linked arms and created a “sisters and mothers chain” in front of the tanks with a placard saying: “Soldiers, don’t shoot at your mothers.” Three people were killed in confrontation with the tanks. Thousands more quickly joined the nonviolent struggle and defeated the coup.

When the French people faced a coup attempt in 1961 the workers — unlike the Russians — had independent trade unions. The French workers’ high degree of organization and experience in striking paid off: 10 million workers participated in an immediate general strike, not long enough to hurt the economy but big enough to persuade the army that it was better off not siding with the military leaders of the coup. The plotters were defeated.

What if Trump’s forces use violence?

In struggle after struggle a win for the people comes after the power grabbers try violence. Thailand offers one example. People there resisted a coup attempt in 1992 with public hunger strikes and major street protests of hundreds of thousands of demonstrators, according to Stephen Zunes. Opposition groups quickly formed an alliance that crossed class lines.

When half a million people nonviolently protested in Bangkok, the army tried to stop the movement’s growth with violence. Some activists responded with projectiles and started fires.

The government then used that as an excuse to crack down more. At the next large demonstration the government upped the repression, including shooting into crowds of nonviolent demonstrators.

As a result the movement grew: more boycotts, strikes, withdrawal of money from military-controlled banks. Other sectors of society joined in. The movement won.

Some researchers call this phenomenon “backfire,” others call it “the paradox of repression,” but all agree that movement growth in response to violence is more likely the more nonviolent the movement remains.

Whatever an activist’s personal code of morality about violence and property destruction is, this question is a collective and strategic one. Evidence-based knowledge shows more allies are stirred to act when we heighten the contrast between our tactics and the tactics of our opponent.

Even though I don’t in general regard property destruction as violence, my personal definition is not what matters here. What matters is the perception of those we seek to win over to support our side. If they see the fires I set as “violence,” I’m giving them a reason not to support us. The Trumpists are delighted.

Our opponents know that, are pleased, use it to justify increased violence, and may even win.

The research of Zunes joins other researchers in their conclusion: nonviolent discipline is one of the predictors of success in stopping a power grab. The way a movement can maximize the chance of winning, then, is to train participants to remain nonviolent in the face of violence used against them. Training adds skills and builds courage. We’ll need all of that for the times we now live in.

WATE 6 on Your Side: “Trump opposes USPS funding, says mail voting hard without it”