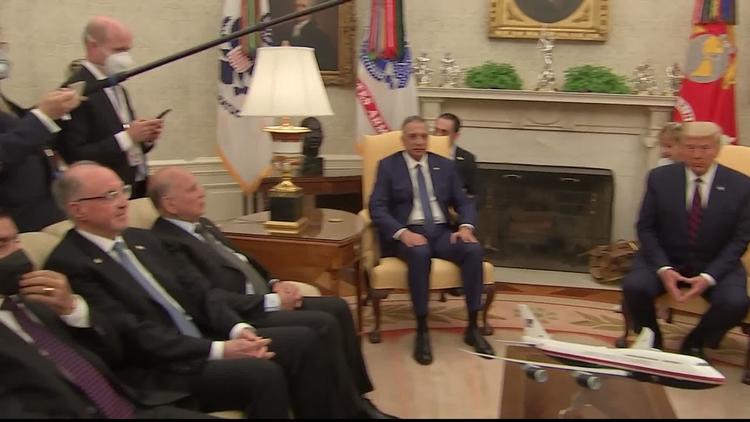 Ann Arbor (Informed Comment) – Last Monday, CNN reports US troops on patrol in eastern Syria were allowed to move through Syrian territory by the Syrian Arab Army, but then abruptly a small unit of Syrian troops fired on them. The US soldiers fired back, and took no casualties, but killed a Syrian soldier. There were demonstrations against the US in Damascus in the wake of that killing.

US troops are risking their lives in Syria.

And why are some 500 still there? Trump tried to withdraw them, and did take them out of the Kurdish areas in the north.

On Thursday, meeting with Iraqi prime minister Mustafa al-Kadhimi, Trump made it crystal clear why US troops are still patrolling in Syria. It is, he said, all about oil.

“As you know, in Syria we’re down to almost nothing, except we kept the oil. But we’ll work out some kind of a deal with the Kurds on that. But we left, but we kept the oil. And we left the border. We said Turkey and Syria can take care of their own border; we don’t have to do it. And that worked out very well. I remember when I did that, I was scorned by everybody. They said, “This is terrible.”

Well, I did it. It’s now two years ago. And we did it with — Mike Pence went over and met with the various parties and very successfully, and we removed our troops. Nobody was killed. Nobody. And now they protect their own border like they have been for hundreds of years. And we’ll — we’ve left. But we did keep a small force, and we kept the oil. And we’ll make a determination on that oil fairly soon.”

As usual, Trump’s word salad contained hefty doses of lies and falsehoods along with one evident truth. “We kept the oil.” As for the rest, the US withdrawal from Syrian Kurdistan in favor of Turkey created havoc, the displacement of tens of thousands, and many Kurdish deaths.

In recent testimony to Congress, Daniel L. Davis of Defense One pointed out, secretary of state Mike Pompeo admitted that the US military presence had allowed Delta Crescent Energy to make a deal with the Syrian Kurds allowing it to develop Syrian petroleum.

The 500 US troops have been reduced to hired guards for a small oil field.

As Davis notes, Pompeo’s testimony infuriated the Turkish government of president Tayyip Erdogan, which views the Syrian Kurds as terrorists and does not want them gaining substantial oil revenue.

Turkish media report that officials of the obscure Delta Crescent One firm are mostly former US government officials, including “James Reese, an ex officer in the Army’s elite Delta Force; former US ambassador to Denmark James Cainand and John P. Dorrier Jr., a former executive at GulfSands Petroleum, a UK based company that had previously worked in northeastern Syria.”

The possibility that the Trump administration is doing a private favor for cronies looms large.

The reputational damage to the US is enormous. For the Americans to occupy part of Syria and profit off Syrian national resources is a war crime and violates the Fourth Geneva Convention.

It isn’t only Turkey that is angered, but Damascus.

Arabi Today reports on the speech this week of Syrian ambassador to the United Nations Bashar al-Ja`fari.

He said he condemned, “acts of aggression, occupation and foreign interference in the internal affairs of Syria, as well as the disastrous effects of the unilateral coercive measures imposed by the American administration and the European Union despite the pleas of the Secretary-General and his Special Envoy and many others– which prevent the Syrians from obtaining their basic needs of food, medicine and medical equipment, especially in light of the spread of the Corona pandemic and its dire effects.”

Al-Ja`fari complained about the US occupation of eastern Syria, which, he said, aimed at plundering Syria’s national resources, including Syrian oil and gas, and at stealing Syrian oil and depriving the Syrians of the revenues needed for reconstruction in the wake of the nine-year long civil war.

For the United States of America to turn itself into a petroleum mercenary for a shadow little oil company and to siphon off a Syrian resource with no shred of legitimacy in international law is a scandal. It is a scandal that will harm US diplomacy and give Russia and Iran credible talking points in their propaganda push against the US in the region. US demands that there be no foreign interference in the domestic affairs of the countries of the region, by which it means Russia and Iran should butt out, are rendered laughable by the nature of the US presence in Syria.

The US Left has shouted itself blue in the face chanting, “no war for oil!” Usually it is hard, though, to know why exactly Washington launches its wars.

In this case, nothing is hidden.