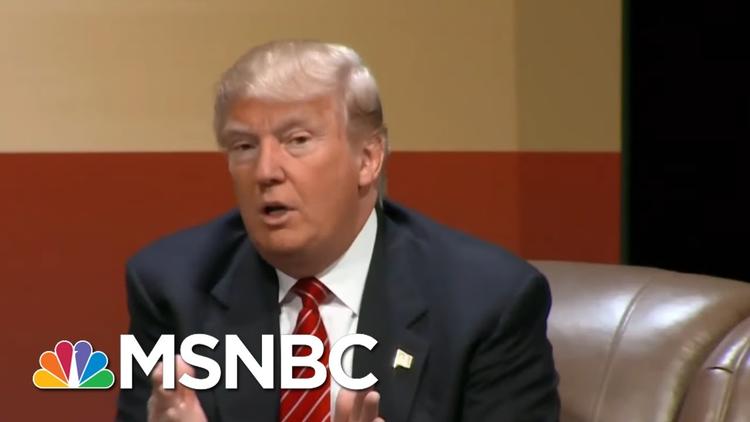 Sometimes it seems like we live in a huge loony bin where things make no sense.

How could the world’s richest, strongest nation give its highest office to a crude, vulgar, shallow, petty, self-worshiping, obnoxious, racist schmuck? How can Donald Trump draw so much political support?

Is it raw racism – widespread approval of his attacks on blacks, Muslims and Hispanics? Does any other explanation work?

“Donald Trump is a phony, a fraud. His promises are as worthless as a degree from Trump University.” – Mitt Romney, 2012 GOP presidential nominee

“Donald Trump is a madman who must be stopped,” – former Louisiana governor and GOP presidential candidate Bobby Jindal

“I’ve got to get this off my chest – Donald Trump is a jerk.” – former Florida governor and GOP presidential candidate Jeb Bush

“I don’t think this guy has any more core principles than a Kardashian marriage.” – Sen. Ben Sasse, R-Neb.

“Donald Trump is unfit to be president. He is a dishonest demagogue who plays to our worst fears. Trump would take America on a dangerous journey.” – Meg Whitman, Hewlett-Packard CEO and former leader of John McCain and Chris Christie presidential campaigns

“The GOP, in putting Trump at the top of the ticket, is endorsing a brand of populism rooted in ignorance, prejudice, fear and isolationism. This troubles me deeply as a Republican, but it troubles me even more as an American. … Never Trump.” – Henry M. Paulson Jr., treasury secretary under George W. Bush

“Listen, Donald Trump is a serial philanderer, and he boasts about it … talks about how great it is to commit adultery. How proud he is. Describes his battles with venereal disease as his own personal Vietnam.” – Sen. Ted Cruz, R-Texas

“A man utterly unfit for the position by temperament, values and policy preferences … whose personal record of chicanery and wild rhetoric of bigotry, misogyny and misplaced belligerence are without parallel in the modern history of either major party.” – Eliot A. Cohen, senior State Department official under George W. Bush

Despite this barrage of boos from fellow Republicans, rank-and-file party members flocked to Trump overwhelmingly, wiping out all other candidates. What does that say about rank-and-file Republicans? What does it say about other Americans who narrowly put Trump into the White House? It shows a glaring flaw in America.

Most baffling of all are white evangelicals who adore Trump. They oppose Jesus. Christ was a liberal who stood with underdogs, preaching aid the poor, heal the sick, feed the hungry, clothe the naked, help the helpless. That fits the modern public safety net backed by Democrats. But white evangelicals mostly back Republicans who want to slash the safety net to give the rich a tax break. How unChristlike.

During a New York fundraiser in September 2016, Hillary Clinton blurted:

“You know, to just be grossly generalistic, you could put half of Trump’s supporters into what I call the basket of deplorables. Right? The racist, sexist, homophobic, xenophobic, Islamophobic — you name it. And unfortunately there are people like that. And he has lifted them up,”

The Washington Post’s Jonathan Capehart, in a column titled “The Basket of Deplorables is Overflowing,” wrote: “Clinton was wrong: It’s more than half.”

It isn’t unusual for a lone person to be repulsive. But when multitudes swarm behind the repulser, it’s a weird phenomenon. That’s an ugly flaw in America.

Trump ‘Is A Man Of Many Fears’: Former Military Leaders React To The Atlantic’s Reporting | MSNBC