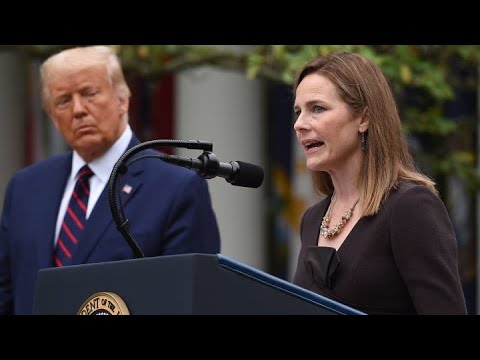 Williamsport, PA (Special to Informed Comment) – “A republic, if you can keep it,” Ben Franklin famously described the new Constitution in 1787. Well, can Americans, including the Republicans, keep it, or will they let it slide into authoritarianism? I, like Franklin, am an optimist, but we have to prepare ourselves for the possibility that Trump and his cult, which has taken over the Republican Party, may find a way by hook or crook to get him a second term. In that case, can the Republic be preserved?

It is now clear why President Trump insists on filling Ruth Bader Ginsburg’s seat with Federal Appeals Court Judge Amy Coney Barrett — so conservative she’s radical — before the November election. If the initial election count goes against him, Trump will call it fraudulent — due to mail-in ballots–and unfold a plan whereby Republican-dominated state legislatures certify an alternate list of Trump electors for the Electoral College. (This from The Atlantic’s scary new piece by Barton Gellman.)

If that procedure is challenged in a stacked Supreme Court, “originalist” Republican justices could find it constitutional 6-3. The Constitution does give that power to state legislatures. Still, the “original intent” of the Framers was that state legislatures faithfully reflect the majority vote. Will that matter? Alas, Federalists find original intent where it suits them.

Likewise, as Trump’s financial shenanigans–exposed in tax and bank records–come to light in New York state trials, Trump’s defense will insist on moving them to federal courts and then bumping them up to the Supreme Court. Which will find that Trump cannot be prosecuted. Trump could thus become not only illegitimate but invulnerable.

The Republic may at that point be in the hands of the Supreme Court, and the Court itself may block the authoritarian drift. The five present conservative Justices are all current or previous members of the “originalist” Federalist Society, as is Barrett. They may favor the Constitution over Trump. If there are nine on the court (assuming Barrett is confirmed), two conservatives may be unwilling to pervert the Constitution, producing a 5-4 decision against Trump. If there are only eight on the Court, one defection would tie it 4-4 and let the lower court’s decision stand. Best bet: Chief Justice Roberts.

But all these barriers to authoritarianism could fail. Does this mean the end of the United States as we know it? At that point, the Democratic majority of voters and at least one house of Congress may be able to thwart Trump’s worst designs, but planning should start now.

At least one house of Congress — it could be both in 2021 — could deny Trump the laws and budgets he demands. Ripe targets: Trump’s Mexico wall and unnecessary military spending. Step up cyber defense spending and require intel agencies to promptly report efforts at penetration. Pass more unemployment relief than Trump wants; make him veto it. Ally with anti-deficit Republicans to crimp Trump’s spending patterns.

In foreign policy, send congressional delegations to the multilateral meetings and institutions Trump rejects. These include global climate change, the Iran nuclear deal and trade flows (e.g., the Trans Pacific Partnership). Work around the hobbled State Department. (Many State officials will quietly help you.) If Trump leads us into war with Iran, reject authorization for the use of military force and restoring the draft.

Barrett scorns precedent and hates the Affordable Care Act. If it’s overturned, closely scrutinize Trump’s replacement for it. He has never produced one, but he may have to. It will contain cavernous faults, especially on pre-existing conditions. Find Trumpcare defective and sink it. When Trump supporters lose their rural hospitals, some may change their vote.

Civil society will also need to step up and activate itself as never before. COVID-19 deaths will approach a quarter-million by election day. “Herd immunity” (about 70 percent carrying antibodies) and vaccines will not arrive for months or even years. With the scientific staffs of federal health agencies silenced by unqualified political appointees, we must learn to work around their misinformation. A nongovernmental committee of scientists should serve as a data clearinghouse and alert system. Large states could also step in to double check the work of the Federal government, as Andrew Cuomo in New York has now pledged to do. To some extent, this is already happening.

So, even if worst comes to worst, we may survive. We can foresee that Trump will leave the Republican Party a shell of its former self. Out of the wreckage, traditional Republicans may become determined to reconstruct and join Democrats in restoring a badly weakened Republic. Yes, I think we can keep it.