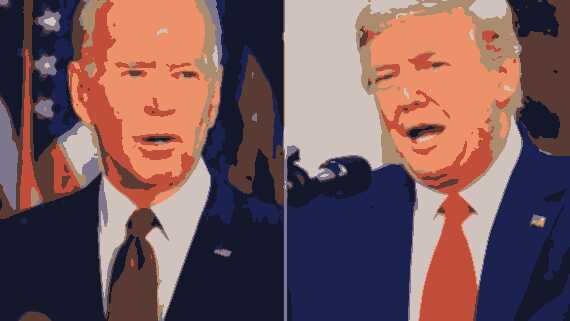 ( Middle East Monitor ) -The polarized nature of American politics often makes it difficult to address fundamental differences between the country’s two main political rivals, Republicans and Democrats. As each side is intent on discrediting the other at every opportunity, unbiased information regarding the two parties’ actual stances on internal and external issues can be difficult to decipher.

Regarding Palestine and Israel, however, both parties’ establishments are quite clear on offering Israel unlimited and unconditional support. The discrepancies in their positions are, at times, quite negligible, even if Democrats, occasionally, attempt to present themselves as fairer and even-handed.

Judging by statements made by Democrat presidential candidate, Joe Biden, his running mate, Kamala Harris, and people affiliated with their campaign, a future President Biden does not intend to reverse any of the pro-Israel political measures adopted by the Donald Trump Administration.

Moreover, a Democrat administration, as revealed, will not even consider the possibility of conditioning US financial and military support to Israel on the latter’s respect for Palestinian human rights, let alone international law altogether.

“Joe Biden has made it clear … he will not tie US security assistance to Israel to political decisions Israel makes, and I couldn’t agree more,” Harris, who is promoted enthusiastically by some as a ‘progressive’ politician, was quoted as saying in a telephone call on August 26. The call was made to what Israeli newspaper, Haaretz, termed as “Jewish supporters.” The Jerusalem Post and the Times of Israel referred to this crucial constituency as “Jewish donors.”

READ: Netanyahu ‘fabricated’ video to influence US policy on Palestine

Although the view of the party’s rank and file has significantly shifted against Israel in recent years, the Democrat’s upper echelon still caters to the Israel lobby and their rich backers, even if this means continuing to mold US foreign policy in the Middle East so that it serves Israeli interests.

Republicans, on the other hand, have cemented their support for Israel, but no longer around geostrategic issues pertaining to Israel’s ‘security’ or US interests. The speeches made by Republican leaders at the Republican National Convention (RNC), held in Charlotte, North Carolina last month, were all aimed at reassuring ‘Christian Zionists’, who represent the most powerful pro-Israel constituency in the US. The once relatively marginal impact of Christian Zionists in directly shaping US foreign policy has morphed, over the years, to define the core values of Republicans.

Regardless of the nature of the discourse through which Republican and Democrat leaders express their love and support for Israel, the two parties are decidedly ‘pro-Israel’. There are many recent examples that corroborate this assertion.

On November 18, 2019, US Secretary of State Mike Pompeo announced that Washington would no longer consider Jewish settlements illegal or a violation of international law. That position was later cemented in Trump’s so-called ‘Deal of the Century’, published on January 28.

Democrats, however, continue to perceive illegal Jewish settlements as, indeed, illegal. “This decision harms the cause of diplomacy, takes us further away from the hope of a two-state solution, and will only further inflame tensions in the region,” Joe Biden’s campaign said in a statement, in response to Pompeo’s declaration.

Although markedly different, it is hard to imagine a Democrat administration upholding the above position, while simultaneously refraining from reversing previous decisions made by the Trump administration. It can only be one or the other.

One’s cynicism is fully justified, as we recently learned, that the Democrat establishment has refused to even use the word ‘occupation’, with reference to Israel’s occupation of Palestine, in their party platform released on July 15. According to Foreign Policy, the decision “followed heavy last-minute lobbying by pro-Israel advocacy groups.”

On December 6, 2017, the Trump administration made one of the boldest pro-Israel decisions, when he formally recognized Jerusalem as the capital of Israel. A few months later, on May 14, 2018, the US embassy was moved from Tel Aviv to Jerusalem, a brazen violation of international law.

The legal foundation of Trump’s decision was the Jerusalem Embassy Act of 1995. This Act was the outcome of bipartisan efforts, bringing together Republicans and Democrats in Congress. Interestingly, leading Democrats, such as Joe Biden and John Kerry, were the main cheerleaders of the embassy move, back then. Only one Democrat senator, the late Robert Byrd, voted against the Bill. In the House of Representatives, only 30 out of 204 Democrats voted ‘no’.

Even though many Democrats rejected the timing of Trump’s implementation of the Jerusalem Embassy Act, their criticism was largely political, primarily motivated by Democrats’ attempts to discredit Trump. The fact that the Biden campaign, later on, made it clear that the decision will not be reversed should he become president, is a further illustration highlighting the moral bankruptcy of the Democrat establishment, as well.

The truth is, US unconditional backing for Israel is a common cause among all American administrations, whether Democrat or Republican. What they may differ on, however, is their overall motive and primary target audience during election time.

Political polarization and misinformation aside, both Democrats and Republicans head to the November elections with strong pro-Israel sentiments, if not outright support, while completely ignoring the plight of occupied and oppressed Palestinians.