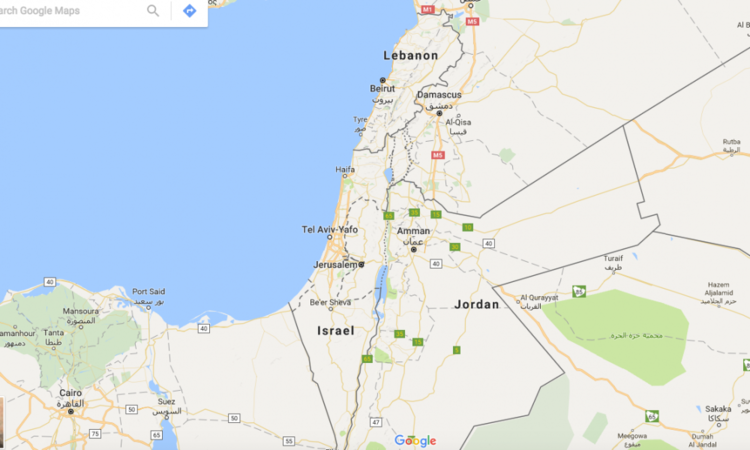 ( Middle East Monitor) – Over a million people have signed a petition since July calling on Google to recognise Palestine on its maps, and to clearly designate and identify the Palestinian territories illegally occupied by Israel.

The petition was initially launched in 2016 on Change.org, but gained significant momentum in mid-July 2020 when activists were mobilised worldwide taking to social media to call on Google to add Palestine to the map. Campaigners expressed their gratitude for those pro-justice, pro-Palestine supporters after they surpassed the target of one million signatures.

“This result is important, not just because it sends a clear message to Google and other online companies that discriminate against Palestine, but also because it shows how much support there is for the Palestinian cause, and for recognition of Palestine as an independent country,” Zak Martin, head of the “Put Palestine on your maps” campaign.

The criticism of giant companies such as Google, Apple and Facebook, expressed by Palestinian frustrations, was the submission of those companies to pressure and blackmailing from Israel.

Palestine is recognised as a non-member observer state at the United Nations (UN) and became state number 194 added to the UN list. A total number of 138 UN members recognise the State of Palestine as independent, but the US is amongst those who choose not to formally recognise it, and currently houses Google, Apple and Facebook.

Labels of Gaza and the West Bank can be seen on some of the maps, as both territories are still occupied since 1967. Google came under fire by Palestinian journalists after the labels for the West Bank and the Gaza Strip were removed. Google responded by acknowledging a “bug” which mislabelled parts of the map, but denied that it had previously labelled Palestine.

It’s true that the insistence of those companies to not add Palestine to their maps and sites will not erase it from history books and archives, since we live in the digital age. However, there is a concern that ignoring this simple demand by Palestinians and pro-justice advocates serves Israel’s purpose to distort history, to censor information about Palestine and does not give the Palestinian narrative a fair and balanced coverage when it comes to history and its facts.

Palestinians have suffered enough, since the historic land of Palestine was illegally occupied, depopulated and ethnically cleansed in 1948. A grave historical injustice was committed and assisted by the UK under the infamous Balfour Declaration.

What would the Israeli reaction be, if for example, Palestinians have influence on those giants’ websites and platforms – to systematically put pressure on Google to delete or ignore demands to add the word “Holocaust”, for instance? Yes, it is only a word, but deleting it or ignoring millions of calls around the world to add it, would indeed lead to frustration and anger.

Palestinians are not a lesser people. They lost their land, and their rights are continuously being denied. They have aspirations and dreams to be a free nation and to share equal rights with Israeli citizens who live in the same land under one rule – Israeli rule, law and control. Their grievances are well-documented and valid. They have been failed by the international community for not pressuring Israel to implement UN resolutions, and end its prolonged military occupation and dismantle illegal settlements.

Sada Social Centre, which defends Palestinian digital rights and monitors social media violations against Palestinian content, informed the press that: “In recent years, Facebook has developed an algorithm that automatically deletes users’ posts and accounts if they include posts that include names of Palestinian political parties, for example: Hamas, Jihad, Popular Front, Qassam, Saraya and Islamic Jihad, or names of martyrs, leaders and others,” Eyad Rifai, head of Sada Social Centre revealed.

Since the rise of the internet and the dominance of social media platforms in recent years, Palestinians found solace in cyberspace to convey their message and disseminate information about their cause, in order to raise awareness and provide an alternative to Western media reporting on the Palestinian struggle – giving a voice to the voiceless.

Palestine is a living memory with a rich history. Today’s message to Google, Facebook and others is: stand with human rights and never agree to pressure to change or distort the course of history.

Yousef Alhelou is a Palestinian freelance journalist and documentary filmmaker based in Gaza-Palestine. He has been working as a broadcast news correspondent and reporter for various on international media outlets since 2007. His work has been featured in a variety of local and international media outlets in broadcast, print and online such as The Real News Network based in the US, BBC, GRN, CBC radio Canada, TV New Zealand, UN observer, Maan news network, Electronic Intifada among many others.