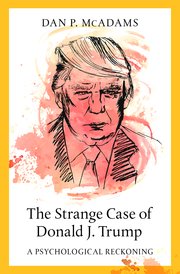 Auburn, Al. (Special to Informed Comment) – In this article I review the

McAdams is a pre-eminent expert in personality theory and the Henry Wade Rogers Professor of Psychology at Northwestern University who does research on how people change over time. He argues that people build evolving narratives of themselves that give their lives unity and purpose. In the above-mentioned book, the author uses sophisticated, scientific research in personality theory, developmental and cognitive psychology that he relates to the life of President Trump. This book gives readers a “psychological reckoning” of Mr. Trump. “Reckoning” means coming to terms with someone, that is, it involves analysis, or, in this case, making sense of what makes Donald Trump tick. In doing so, McAdams gives an evidence-based, fair-minded portrait of Mr. Trump to the degree that that is possible, since we’re all human and have our views.

The author makes a crucial distinction between the language of medicine that speaks of sickness and health as opposed to the language of personality that concerns itself with such notions as goals, motivation, self-concept, narrative identity, values, temperament, and the dynamics of attachment. The disciplines of psychiatry and clinical psychology deal with the language of medicine, whereas McAdams uses the language of human personality in focusing on Donald Trump. The author believes that neither psychiatrist nor psychologists should diagnose political figures in accordance with the Goldwater Rule that forbids psychiatrists from diagnosing mental illnesses in public officials. Hence the author, to his credit, simply endeavors to understand “who Donald Trump is and how he came to be.”

McAdams points out that Donald Trump lacks a compelling narrative or story to spin “about himself.” Trump has no story to tell about who he is, came to be, and will be in the future. He lives in the moment without regard to his past or future. He sees himself as a thing, akin to a comic-book superhero, living from one episode to another. The author calls him “episodic man,” similar to a “volcano” or “wild beast.” Most people have a tool called “autobiographical reasoning.” This tool enables one to have a life story that shows one’s uniqueness, gives meaning to one’s past, thus describing how one came to be. As a person gets older and moves into their 20s, 30s, and 40s, one’s autobiographical reasoning becomes more apparent and more sophisticated. Trump seems to lack insight into his life since he does not appear to have autobiographical reasoning. He has absolutely no perspective on himself, though he talks about his fantastic accomplishments, ad nauseam.

Trump, an episodic man in a Hobbesian universe, looks upon the world as a dangerous place. It’s all about winning and defeating one’s enemies at all costs. The world consists entirely of winners and losers or “suckers.” An episodic person does not have to be truthful or moral, since only one goal remains important: absolute victory. McAdams argues that Trump’s goal in 2016 was to win the election. That was more important to him, than governing the country. Surprisingly, Trump filed papers in order to be a candidate for the presidential campaign in 2020 on his first day in office in January, 2017. Today, Trump aims to be re-elected President for a second term and nothing or no one will keep him from attaining that goal. Otherwise, he will have failed miserably and the word, “fail” doesn’t exist in Trump’s vocabulary. Trump perpetually describes himself as a “winner” even when he fails.

One may ask “Is Donald Trump one of the greatest deal-makers in the history of US Presidents?” To this question one must give a resounding “No.” Why so? For example, during his presidency from 2017 to the spring of 2019, Trump destroyed more deals than he did creating new ones. He took the US out of the Paris climate accords that were adopted by almost 200 nations. Trump breached the Iran nuclear agreement or JCPOA made during the Obama administration between the UN Security Council (China, France, Britain Russia and the US) plus Germany, and Iran . He also refused to sign the Trans-Pacific Partnership (TPP) trade deal.

There are five basic steps to deal-making according to Mr. Trump. First, one must fill a human need, that is, cater to what the other person desires and then presenting oneself as the ideal person to meet that person’s need. Second, bend the rules and defy the norms by using “truthful hyperbole.” Innocent exaggerations and white lies are fine and desirable in certain settings. For this reason, hundreds of lawsuits have been brought against Mr. Trump for tax evasion, sexual assaults on women, and dubious financial practices. Third, put on a show. Trump’s deals are similar to performance art or a musical on Broadway. For Trump the benefits of being written about are much greater than the downside, even if the publicity is bad. It amounts to free publicity. Fourth, one should exert maximal pressure. It helps to look big, i.e., be intimidating and fearless. Bargain hard over every inch of the deal and make far out demands one after another, thus wearing out the opposition. Five, win always. Between 1984 and 1995, Trump’s core businesses lost $1.7 billion, more than any other US taxpayer. Trump did have to give up three casinos, his $30 million yacht, the Trump Shuttle, and the Plaza hotel, plus was forced to limit his expenses to $450,000 a month. Despite these losses, Trump considered himself a “winner’ since the banks had to save Trump in order to save themselves.

Trump considered deals with foreign countries on a par with a real estate transaction. Yet in foreign policy (including trade deals) the parties involved are “repeat players.” If one takes advantage of another country, they will, like the proverbial elephant, never forget it. There must be long-term trust between the various parties in a trade deal, otherwise there will be “revenge diplomacy.” That’s the reason why the US and China cannot agree on a trade deal, since President Xi does not, for good reason, trust Mr. Trump nor his negotiators, like Treasury Secretary, Steven Mnuchin and US Trade Representative, Robert Lighthizer, who take their orders from President Trump.

Personality psychologists agree on five fundamental elements of behavior variability. They are (1.) Extraversion: enthusiasm, gregariousness, reward-seeking behavior, and social dominance, (2). Neuroticism: emotional instability, negative emotions and depressive tendencies, (3). Openness: receptivity to new ideas, imagination, curiosity; (4). Conscientiousness: abidance to rules, discipline, organization, organization; and (5) Agreeableness: kindness, compassion, care for others, warmth, modesty. These elements or dimensions are on a continuum from very high extraversion to very low introversion. Trump is outstanding in two of these traits, viz., he’s off the charts relative to extraversion and rock bottom in terms of agreeableness. Donald Trump may be one of the most extraverted persons who ever walked the planet. Extraversion shows itself via words, bodily movements, facial expressions, such as smiling, and other non-verbal signs. Enthusiasm engenders enthusiasm and Trump’s energy ignites a crowd of onlookers who on the campaign trail are won over, regardless of what Trump actually says. Trump won the 2016 election without any platform whatsoever. He won it on the basis of his strong personality and animal magnetism.

Simultaneously, Trump has a huge downside. He fails on the trait called agreeableness that asks the question “how nice one is.” The author calls Trump “a tsunami of disagreeableness.” We see this on Twitter where Trump belittles his enemies such as journalists, the media, Democrats, Republicans like the late Sen. McCain, cabinet members, immigrants, blacks, Latinos, athletes. In sum, his venom is spit out against anyone who disagrees with him. Trump is an authoritarian person and would like to be President of the US forever. Yet President has a fondness for violent men like Vladimir Putin who can neither see nor do any evil. Trump demands absolute loyalty from his entire administration yet he himself would not support anyone who turns on him like Michael Cohen.

With all his faults, how did it come to pass that President Trump has a fervent base of millions of followers? First, Trump supporters deny that he lies or claim he doesn’t lie very much. Others dismiss the allegations that Trump lies, blaming it on the Democrats and the leftist press. Second, some of his followers remark that Trump “tells it like it is.” His heart is in the right place though he may lie “about the details.” Third, some supporters say Trump’s claims could be true. When Trump lied about the size of the inauguration crowd, Kellyanne Conway responded that horrible weather kept his followers away. Fourth, Trump may be a con man, however, he’s our con man. This may account for the number of Republican senators and representatives who know that Trump bends the truth, but they must support him for fear of losing their next election.

Five, some supporters argue that Trump is a different kind of person whose rules do not apply to him. For some, Trump has superhuman powers that allow him to do what other politicians do not dare. Would George W. Bush or Barack Obama have survived their presidency if they had bragged on camera that they grabbed a woman’s genitals or stated they trusted Vladimir Putin more than their own intelligence agencies? A number of white evangelical Christians like Jerry Falwell Jr. see Trump as a kind of savior sent to save the country from radical Muslim terrorists and the erosion of Christian values.

This book is profound, insightful, and evidence-based. It’s the summation of the academic research on personality that McAdams has done over his entire lifetime. I feel entirely comfortable recommending it to readers of all stripes. Strongly recommended.