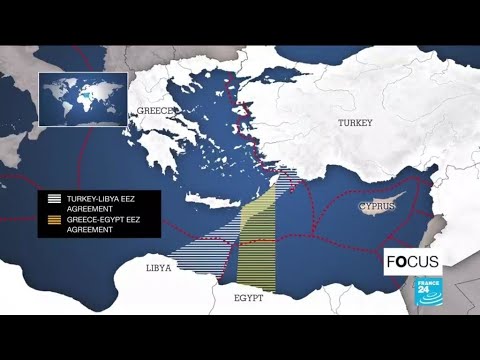 Ann Arbor (Informed Comment) – Greece and Turkey have been having loud shouting matches this summer, with some pretty ominous language at times. The two are supposed to be NATO allies, but you couldn’t tell it from their bellicose rhetoric.

A nationalist Turkish politician, Devlet Bahceli, is quoted as having said of said this past weekend, “War with Greece is only a matter of time.”

Meanwhile, Bianet reports that the spokesman for Turkey’s ruling Justice and Development Party (AKP), Ömer Çelik, said Tuesday that “Turkey will not accept or forgive any action or bluff against its maritime blue homeland. Greece is now a rogue state in the Eastern Mediterranean Sea, and is reaching past its grasp.”

Celik and Bahceli are upset by several recent Greek actions, including the government decision to claim territory up to 12 nautical miles off its coast. A lot of Greece is small islands in the Mediterranean, and some of them are very close to Turkey, so this claim, which is permitted by the UN Convention on the Law of the Sea, would take it right to Turkey’s doorstep. The United States also claims 12 nautical miles off its coast. Some countries, such as Iran, claim substantially more.

The Greek claim of extended territorial waters would in some instances overlap with waters claimed by Turkey, and interfere with Turkey’s search for natural gas deposits off its coast. Turkey claims to have found a middling gas field in the Black Sea, which would provide its needs for seven years once developed.

Frankly, Turkey’s and other Mediterranean countries’ mania for new natural gas finds is brain dead. It would be much cheaper to just put in wind farms and solar panels, and then they wouldn’t be burning fossil fuels that will erode their coast lines and cause sea rise and megastorms.

President Tayyip Erdogan’s AKP has dominated parliament for nearly two decades not on its own, but with the support of the Nationalist Movement Party (Turkish acronym MHP). Although it hasn’t always been a formal ally of the center-right, pro-Islam AKP, it has voted with it on key issues, and the two ran as a coalition in 2018.

Bahceli heads the Nationalist Movement Party. He does not run Turkey, but he is a mover and shaker and allied with the man who does run Turkey.

The issue of Greece’s territorial sea is only one irritant. The island of Cyprus is partitioned into a Greek-speaking Republic of Cyprus close to Athens and a Turkish republic recognized only by Ankara. The ownership of gas deposits off the coast of Cyprus have caused conflict between Turkey and Greece. Turkey has insisted on doing exploratory drilling, and there was even a collision between a Turkish and a Greek vessel.

Turkey’s strategic agreement with the UN-recognized government of Libya in Tripoli implies the drawing of a line through the Mediterranean delineating a Turkish naval sphere of influence, which is opposed by Western European countries. This issue is also wrought up with the Cyprus gas dispute.

Since Trump doesn’t like NATO and seems to wish it would drop dead, the US is not playing a mediating role between its two allies. Germany is just siding with Greece, which Bahceli calls a European “crusade.”

Just as the US government is asleep at the switch on the coronavirus pandemic, it is asleep in the face of these rising eastern Mediterranean tensions, which could spiral out of control.

France 24: “Tensions escalate between Greece and Turkey in eastern Mediterranean”