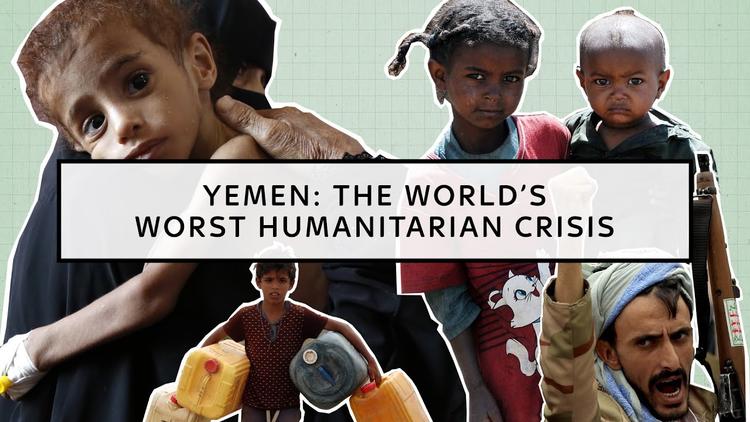 Ann Arbor (Informed Comment) – Mark Lowcock of the United Nations gave an impassioned and apocalyptic speech on Thursday warning that 4 million Yemenis who had been receiving aid no longer are, because of a shortfall in donor contributions, and the country could be on the cusp of mass starvation.

There already is widespread malnutrition in Yemen, fueled by the war and more recently by the economic downturn of the coronavirus pandemic.

The humanitarian catastrophe in Yemen largely stems from the war on that country launched in 2015 by Saudi Arabia and the United Arab Emirates, which is backed to the hilt by the Trump administration. This is an American war, and Americans have Yemeni blood on their hands. A third of Yemen’s infrastructure has been destroyed, mostly by Saudi and UAE air strikes, and over 100,000 have been killed.

The United Arab Emirates, led by Mohammed Bin Zayed, is giving nothing to aid Yemen this year, despite its invasion having caused many of the problems the country is facing. The Saudis and Kuwaitis were also called out by Lowcock, and they did proffer new donations, with Kuwait offering $20 million. But the aid effort has fallen from being funded at over 60% of requested contributions to only 42%.

Embed from Getty Images
Huthi rebel fighters inspect the damage after a reported air strike carried out by the Saudi-led coalition targeted the presidential palace in the Yemeni capital Sanaa on December 5, 2017. Saudi-led warplanes pounded the rebel-held capital before dawn after the rebels killed former president Ali Abdullah Saleh as he fled the city following the collapse of their uneasy alliance, residents said. / AFP PHOTO / Mohammed HUWAIS (Photo credit should read MOHAMMED HUWAIS/AFP via Getty Images).

“Aid agencies are now reaching only about 9 million people a month in Yemen – that’s down from more than 13 million at the start of the year. What is to be the fate of the 4 million we no longer have the money to help? I said earlier that the window to prevent famine in Yemen is closing.”

The country’s problems are worsening along several fronts, Lowcock reported. The nationalist government of Abd-Rabbo Mansour Hadi, backed by Saudi Arabia, has long contested the insurgent Houthis or Helpers of God for the port of Hodeidah, which is key to the provisioning of the northern part of the country. Its fighters have been preventing gasoline from being offloaded, presumably in a bid to deprive the Houthis of the ability to use armored vehicles. The Houthis are local guerrillas from the northern Zaydi Shiite branch of Islam. Although they are often called “Iran-backed,” the Iranian involvement in Yemen is not extensive, and the Houthis have local Arab grievances. The billions of dollars of high-tech weaponry sold to the Saudis and the UAE for use against Yemen dwarfs the small Iranian contributions to the Houthis by orders of magnitude. Zaydis often feel that Saudi Arabia was trying to dominate them and convert them to its hardline Wahhabi sect.

Lowcock noted, “Only 20,000 metric tons of commercial fuel entered Hudaydah in September – that’s the third lowest figure ever recorded, and 76 per cent less than in August. Currently, 20 commercial fuel ships are waiting to enter the port and discharge the equivalent of three months of imports.”

The problem is that it isn’t only the Houthis who are being starved of fuel, but ordinary people, who need it to drive to market or to hospital when ill, and farmers who need it to deliver their crops to towns.

Embed from Getty Images
Saudi army artillery fire shells towards Yemen from a post close to the Saudi-Yemeni border, in southwestern Saudi Arabia, on April 13, 2015 . Saudi Arabia is leading a coalition of several Arab countries which since March 26 has carried out air strikes against the Shiite Huthis rebels, who overran the capital Sanaa in September and have expanded to other parts of Yemen. AFP PHOTO / FAYEZ NURELDINE (Photo credit should read FAYEZ NURELDINE/AFP via Getty Images).

Likewise, the basket-case condition of the country has driven the Yemeni rial down to 850 to the dollar, a historic low. This exchange rate makes it impossible for many Yemenis to afford imports, and much of the country’s food and other staples are imported

Famines are not typically caused by a complete lack of food, but by food prices being too high for people to afford to buy it. If the nationalist government cannot find a way to put back up the value of the rial, large numbers of people could starve.

The war is also getting worse, despite this week’s prisoner exchange between the Houthis and the nationalists.

Lowcock warned, “There are now 47 active front lines across Yemen – the most ever recorded. Over several recent weeks, the heaviest clashes have occurred in Hudaydah, Marib and Al Jawf.”

This year, another 150,000 people were displaced from their homes by the fighting, 80% to homeless shelters, bringing the total in the country to a million. The country’s population is about 30 million.

Last month,the UN announced that it was forced to slash aid to 300 medical facilities in Yemen, after a third of humanitarian programs in the country were closed in spring-summer this year.