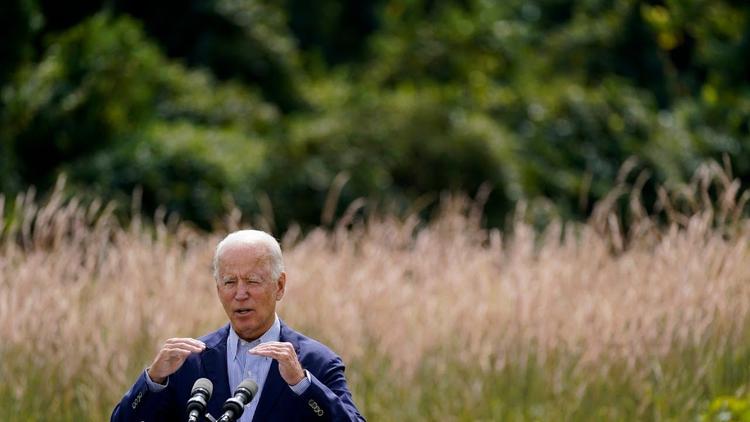 Ann Arbor (Informed Comment) – Trump doesn’t get climate change or the ways to combat it. He is a greedy, venal person, and I presume he is encouraged in his obscurantism by some sort of business interest in the oil and gas industry, or backing by them with campaign dollars. Or perhaps he just, by virtue of whatever condition he suffers from, always prefers crazy conspiracy theories to reality.

But Biden’s original statement is far more likely to end up being correct.

Biden’s backing of renewables won’t upset as many Americans as Trump assumes. Wind and solar are soaring in Texas, e.g., while petroleum and gas prices have been hard hit by the pandemic.

Cheaper and better electric vehicles are on the way, and the transition away from gasoline will happen far faster than most people now imagine. Stanford business professor Tony Seba points out that at the New York City St. Patrick’s day parade in 1900, there was only one gasoline car, with the rest of the vehicles being horses and buggies. In 1913, they were all automobiles, with only one horse and buggy.

That’s less time than separates us from 2035.

And, it will happen even more quickly if the US government gets behind it. The European Union set carbon targets, and companies are fined for going over them, which has concentrated the minds of European auto makers.

” In 2017, the Trump administration instituted a 30 percent tariff on imported solar panels, ostensibly to invigorate U.S. manufacturing. In practice, however, this hobbled solar-panel installation in the U.S. and imperiled the jobs of more than 350,000 people who work in solar (more than twice as many people who work in the entire American coal industry). A solar industry group reported in December of last year that Trump’s tariffs had cost an estimated 62,000 jobs and $19 billion in investments.”

Trump said that he withdrew from the Paris climate accord because staying in would do damage to the US economy. The Paris Accord lets countries set their own goals for carbon emission reductions and did not impose anything on the US from the outside. Trump could have stayed in and simply declared longer-term goals.

Trump withdrew in order to blunt momentum toward global action on the climate emergency by the governments of the world. It was highly destructive symbolic politics.

As Biden pointed out, Trump said he thinks wind turbines cause cancer. That makes no sense. How would wind blowing on turbine blades cause any disease at all?

The wind industry in the United States now accounts for 120,000 jobs. Some 60,000 wind turbines generate nearly 110,000 megawatts of electricity. That is 7.2% of American electricity, powering 27.5 million homes.

There is every reason to think that wind power in the US will go from strength to strength. Of the 110,000 megawatts, nearly ten percent of them were installed in 2019 alone. Another 4,300 megawatts were added in the first half of 2020, despite the coronavirus shutdown.

As Joe Biden correctly said, the US government gives Big Oil and Big Gas subsidies to wreck the earth. If the federal government actively promoted wind and solar instead, we could quickly double wind energy during Biden’s presidency.

Wind is clean energy that does not produce earth-destroying carbon dioxide.

Wind generates 20% of the electricity in the United Kingdom, another capitalist democracy run by conservatives. Scotland, a nation within the UK, is on track to get 100% of its electricity from renewables by the end of this year.

Prime Minister Boris Johnson plans for offshore wind to provide electricity to all of Britain’s households within ten years.

The UK has notably not had its economy destroyed by renewables in the way Trump alleges.

In fact, wind and solar are now cheaper ways to generate electricity than coal and natural gas, and big generators of jobs.

Trump said that solar is “not there yet.” But solar produces electricity more cheaply than gas or coal in most of the country. Coal is usually figured at 5 cents a kilowatt hour.

One company has proposed a solar plant for Los Angeles at less than 2 cents a kilowatt hour. In California, you could actually build solar farms and operate them for less than it would cost you just to go on operating an old gas plant (California does not have any coal plants).

Imagine if Biden can remove the tariff on solar panels and the free market can operate again. Imagine if Biden and a Democratic Congress actually legislate support for solar.

The US could transition to wind and solar electricity well before Biden’s goal of 2035 if only you had a government dedicated to doing so. And, as Biden pointed out, doing so would create jobs and save money, what with sunshine and wind being free.