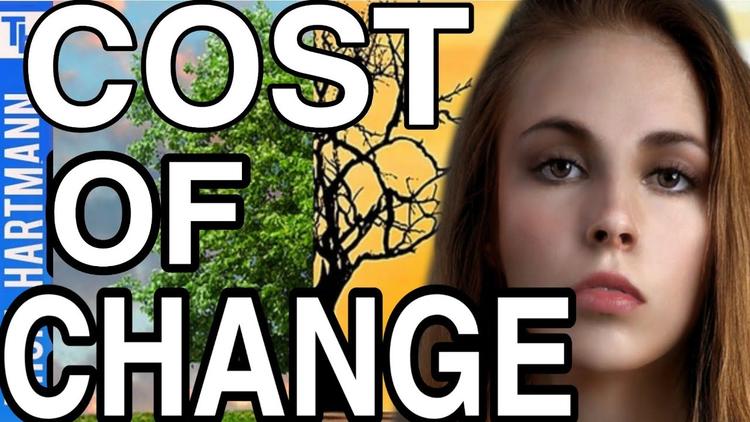 Ann Arbor (Informed Comment) – A study in Nature Communications has found that if you add in variability to calculations of the impact of climate change, the upper range of the damage it could do to property is $563 trillion.* That is in the worst case scenario where the world does virtually nothing to stop carbon dioxide and methane emissions over the coming decades.

Although the governments of the world talk a nice game, actually none of them is significantly reducing their annual emissions. Temporary falls in emissions from events like Covid-19 don’t count because all signs point to a ramping back up of emissions as soon as the crisis passes. In 2019, you, I, and everyone else on earth put nearly 37 billion tons of the dangerous heat-trapping gas, carbon dioxide, into the atmosphere, the third year in a row the number increased. We’ve been going in the wrong direction.

The way we put CO2 into the atmosphere is to drive our gasoline cars, to burn coal to make electricity or heat our homes, to burn natural gas for the same purposes, etc. That is, the innocent little things we do every day to get around and turn on our lights and to control the temperature in our buildings — those quotidian little things are wrecking the earth, raising the seas, burning the forests, turbo-charging hurricanes and cyclones, and beginning the process of destroying up to $563 trillion in value throughout the world.

In the second presidential debate, Joe Biden said he wanted to transition away from US government subsidies for petroleum. Biden has also urged an end to fracking on public land. Trump jumped on these statements and twisted them, because he knows that western Pennsylvania has a lot of people in it who depend on fracking and on the production of oil and gas. Trump probably cannot win the presidency without Pennsylvania.

While I sympathize with people who might lose their jobs because of technological change, people in western Pennsylvania should look around for alternatives to fracking and fossil fuels as ways to make money. Because they are wiping out the value all the wealth in their communities over time and beggaring their grandchildren and great-grandchildren. New York state has banned fracking and it is still rich. Solar is now the cheapest form of energy, with wind turbines just behind, and oil, coal and gas are doomed over the next two decades. But we can’t wait for the markets and technology to make fossil fuels even more uneconomical than they are.

A couple of years ago, this site estimated the value of all the immoveable property in the world at $217 trillion. Stocks and securities come to $55 trillion. Money, i.e. cash, bank deposits, etc., comes to about $37 trillion. Then you have almost $100 trillion in securitized debt.

That is, its seems likely that the $563 trillion that the Nature Communications article found was the upper range of climate emergency damage comes to more wealth than currently exists in the entire world. It would all be wiped out, and we’d all be in the stone age or dead.

The world has what is called a “carbon budget.” This results from the ability of the oceans to absorb carbon dioxide. It isn’t actually a really good thing, since it makes the oceans more acidic and will kill off a lot of fish. But at least large amounts of this dangerous gas won’t still be trapping heat in the upper atmosphere. It will be in the ocean.

Here’s the problem. The oceans can only absorb so much CO2. There is also evidence that a warm layer of ocean water at the surface, which is intermixed with freshwater ice melt, actually has less CO2 absorptive capacity, so as the earth heats this oceanic offset may diminish.

When the ocean has taken in all the CO2 it can, whatever petroleum, gas and coal we burn beyond that will produce carbon dioxide that just hangs in the air and overheats the earth. There are still things that will scrub it from the atmosphere, like igneous rock, to which it binds. But one estimate I read said that it would take 100,000 years for those processes to take back out all the CO2 humans have put up there.

So, really, there is only one thing to do if we want to preserve our jobs and our wealth. That is to invest in getting off fossil fuels as soon as humanly possible. That task will require governments to intervene– it can’t be accomplished solely by individual effort. It is admirable for people to get electric cars and put solar panels up on their roofs, but those changes won’t come in sufficient numbers or quickly enough. We need the government.

Economist Robert Pollin has estimated that if we spend 2% of GDP annually from now to 2050, we could get to net carbon zero for $18 trillion over those 30 years. That is $600 billion a year, or less than the cost of the Department of Defense (which has not actually defended us from the most dire threats we’ve faced recently, like Covid-19 and the climate emergency).

Personally, I think such estimates don’t take account of how steeply and quickly the cost of solar and wind power generation is falling. We would already save money by closing all coal and natural gas plants and replacing them with wind and solar. Imagine what it will be like in 2030.

But what the Nature Communications paper demonstrates is that it is absolutely crazy *not* to invest that $18 trillion in moving quickly to keep the increase in global heating down to about 2 degrees F. (1.5 degrees C.).

Because the worst case scenario of not doing anything is that we lose everything.