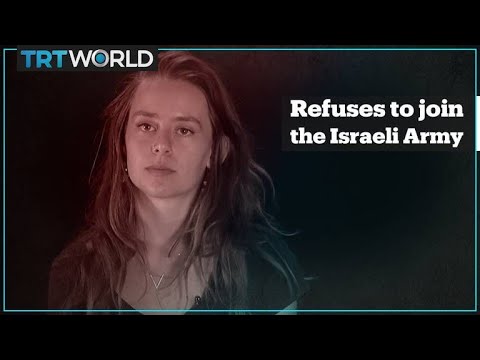 ( Middle East Monitor) – Amira Hass is a courageous Israeli journalist who defends the Palestinian people relentlessly and without hesitation. She writes about the rights of Palestinians and exposes the actions and racism of Israel’s occupation. In Haaretz recently, she wrote about a 19-year-old Israeli woman, Hallel Rabin, who refused to do her military service in the occupied Palestinian territories, which she summarises as refusing to be involved in “killing, violence and destruction”.

Members of the Israeli army’s “conscience committee” concluded that Rabin “opposes Israeli violence directed at the Palestinians” and this, according to the committee, is not regarded as conscientious objection, but political opposition. As such, the committee decided to imprison her.

Conscientious objectors in Israel are still limited in number and influence. They are seen as a minor departure from the norm, albeit traitors by most Israelis. Society in the occupation state is still captive to colonial extremism, national and religious racism. The government still refuses to implement UN resolutions that are fair to the Palestinian people.

Nevertheless, the likes of Hallel Rabin are valued and valuable. They are a youthful light in the face of the occupation’s darkness and oppression; an element of hope that the future could still be better. Rabin stands with the people of Palestine and shows that they have not been forgotten.

This is the human reality at desperate times. It’s the kind of reality that Maher Al-Akhras believes in as he astonishes his oppressors with his willingness to sacrifice his life in a hunger strike. He believes that even if he dies, his cry for the freedom of Palestine is louder, stronger and more powerful than submission, retreat and the denial of the Palestinians’ right to life on their homeland, which they cannot abandon. Their eternal love for the land and their dignity are irreplaceable.

Hallel Rabin and other little-known Israelis establish Palestinian-Israeli values, relations and partnerships based on equality and the desire to live without violence, oppression and occupation. They offer an alternative to the state racism that affects so many Israeli citizens as well as the Palestinians in the occupied territories, and are prepared to go to prison in defence of their beliefs.

When we see what Amira Hass and her fellow journalist Gideon Levy write, and we witness the positions taken by Ofer Cassif and his former colleague in the Knesset Dov Khenin, as well as Hallel Rabin’s stance, we can only conclude that there are definitely people within Israel who want to help the Palestinians. And the Palestinians should play their part in building such relationships and develop access to wider Israeli society so that balanced narratives can be shared in the search for justice.

Winning over those Israelis who are disillusioned with the way that their government is going ever more to the extreme right can help to tip the balance in the Palestinians’ favour. When that starts to happen, anything is possible.

Hamada Fara’na is a Palestinian activist and writer. He served as a member of the Jordanian parliament and the National Palestinian Council.

TRT World: “19-year-old Israeli sentenced to jail for refusing to join the army