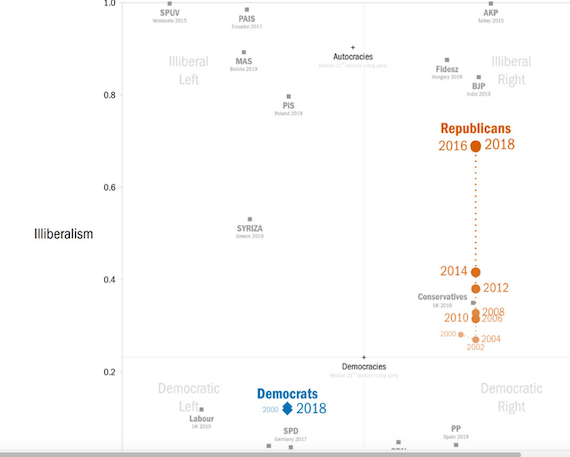 Ann Arbor (Informed Comment) – A study by Swedish political scientists at the University of Gothenburg’s V-Dem Institute has found that the US Republican Party has moved far to the right since 2000, and no longer looks very much like the Christian Democrats in Germany or the Tories in Britain, or the Liberal Democratic Party in Japan (which is actually a conservative pro-business party despite the name).

The scholars found that the US GOP increasingly looks illiberal, drawing closer to Viktor Orban’s Hunagarian Civic Alliance and the Justice and Development Party of Tayyip Erdogan in Turkey. In many cases, they say, it is no longer devoted to democratic norms.

They graphed Republican Party positions over the past 20 years, using political scientist Juan Linz’s 1978 criteria for illiberalism, which were expanded on by Steven Levitsky and Daniel Ziblatt in their book on “How Democracies Die” (2018).

Here are the things that cause a party to be high on the Illiberalism Index:

They do not find that the GOP drift to Illiberalism is solely because of Donald Trump. Rather, the process of moving to the far right began with George W. Bush.

Among the democracies in the 21st century, only 15% have parties as or more illiberal than the US Republican Party.

Some other criteria were

So when Trump at his rallies endorses “lock her up” chants for Michigan governor Gretchen Whitmer, that’s a trifecta. He’s demonizing and disrespecting his opponent, encouraging political violence (creating an atmosphere in which a militia plotted to kidnap her), and disrespecting the rights of African-Americans and other minorities, who suffer disproportionately from the coronavirus and whom Whitmer is trying to protect (along with other Michiganders) with her public health measures (measures that Trump opposes).

We can also see these processes in the confirmation yesterday of Amy Coney Barrett, who was pushed through by the slim Republican majority in the senate even though not a single democrat voted for her. The Republicans in the senate undermined political pluralism by refusing to hold a vote on Merrick Garland in an election year, but voting Barrett in actually during an election. Barrett was chosen for her unusual religious beliefs, which are shared by almost no Americans, and will certainly affect her judgment on the court. This is a GOP appeal to religion, i.e. to evangelicals and conservative Catholics, in order to abolish a woman’s right to choose. A minority of Americans oppose that right.

Another place we can see this process is in the Republican charge that vice presidential candidate Kamala Harris is a “socialist.” She rightly laughed out loud at this charge when it was brought up in a 60 Minutes interview.

Socialism is the public ownership and control of businesses. Which business does Harris want to nationalize?

In fact, those of us on the left would have liked Biden to choose an actual socialist as his running mate. Throwing these meaningless epithets such as “socialist” at center-right politicians is a way of disrespecting and demonizing political opponents. In Britain, Harris would certainly be a Tory, as would much of the Democratic Party, and in Germany she’s likely be with Merkel.

The evidence is everywhere for the correctness of V-Dem’s conclusions. It is a sad end for the Grand Old Party. For all its flaws over the decades, it wasn’t usually illiberal to this degree in the 20th century.

And since Trump is a symptom and not the cause, you worry whether it is too late for the party to come back to democracy.