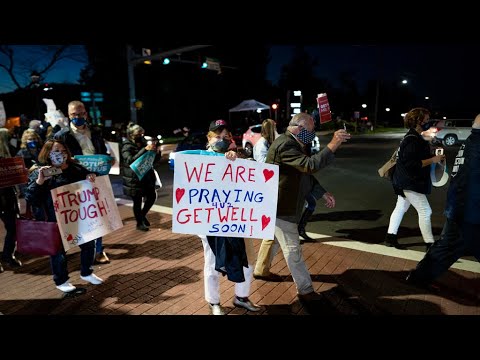 Ann Arbor (Informed Comment) – The Republican Party is sick. That isn’t a putdown, it is just the truth. The chair of the Republican National Committee, Ronna McDaniel, is down with Covid-19, which she caught from hanging around with top Republican leaders. The head of the party, Donald Trump, is so ill he is in an army hospital. While we wish him a speedy recovery, we are being cautioned that “the next 48 hours is critical.” Three Republican senators have just announced they have the virus. Chris Christie has gone into the hospital. Nick Luna, the director of operations for the Oval Office, has just announced that he has the virus. Hope Hicks, the counselor to the president whose idea it was to have Trump walk to St. John’s Episcopal Church amid the Lafayette Square protests and hold up a Bible, and who had earlier had to resign over lying to Congress– that Hope Hicks is also sick in bed with the coronavirus. Again, it is a horrible disease that can have long term, little understood negative effects on heart and lung health, and it is hoped that all these victims will come through it and return to health.

In a sense, the novel coronavirus has made a coup in the White House, leaving no one in charge.

Like the plague in Albert Camus’ novel, set in Oran, Algeria, during WW II, however, this outbreak is more than a matter of epidemiology. It is symbolic of the way in which the ideology of the Republican Party, which puts Big Property above people’s lives, is making us all sick.

Neither the Republican Party nor Donald Trump is responsible for the initial outbreak of the novel coronavirus in February. But Trump and his team are certainly 1) responsible for tens of thousands of lives lost because their response to it was so inadequate. Trump did not ramp up national testing and contact tracing, and most tests given in the country are still fairly useless because they come back too late to use for that purpose. This was how South Korea kept its death toll to a few hundred. Trump closed down the economy too late, and opened back up too soon. He discouraged mask wearing. He pressured governors to open bars and restaurants without restrictions despite their being known vectors for the spread of the disease. He actively discouraged mask-wearing. He told people not to take the virus seriously because he was afraid it would panic the stock market and cost him reelection. He said “it would go away in April. It would be like a miracle. At most 60,000 would die. We’ve turned the corner.” He lied.

The US has had among the ten worst governmental responses to the virus among the 194 countries in the world. It can only be compared to a developing country like Brazil. It isn’t in the same league with Germany, South Korea, or Taiwan. And the buck stops on the president’s currently unoccupied desk.

As for the symbolism of the Republican Party being sick, consider that it is 2) trying to get the Affordable Care Act struck down while offering nothing in its place. That makes us sick. 55 million Americans have pre-existing conditions, and they would be denied treatment for them unless they paid big bucks out of pocket. 23 million Americans would immediately lose their health insurance if the ACA were struck down. Millions of Americans have lost their jobs in the Covid-19 Depression, and their health care was tied to their jobs. Both gone.

3) The Republican Party, led by Trump, is pro-carbon. It favors burning petroleum, coal and natural gas, and denies that putting billions of tons of heat-trapping gases into the atmosphere is causing global heating. The climate emergency is bad for our health. The wildfires are deadlier, more frequent, bigger. The hurricanes are deadlier, more frequent, bigger. Then there is the flooding on the coasts and the droughts in the interior. The Scientific American estimates that the climate changes are already making 5 million people sick every year throughout the world. Four percent of 5 million is 200,000. That is how many people climate change is sickening every year in the US.

4) 4 in 10 Americans live in counties that have unhealthy levels of ozone or of particles in the air. In 2019, some 7.2 million more Americans lived in counties with poor air than in 2018. Gee. Hmm. Why should that be? Trump has slashed regulations of air quality and promoted burning fossil fuels.

Americans need a Health Bill of Rights, to protect them from the Republican Party and the polluters it represents and coddles. Because the party is sick and making you sick, too.