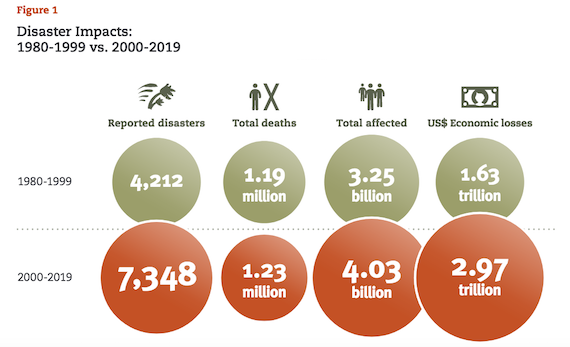 Ann Arbor (Informed Comment) – The United Nations Office for Disaster Risk Reduction issued a report today concluding that natural disasters caused by the human impact on earth’s climate have doubled in the past twenty years.

Human beings have put increasing amounts of heat-trapping gases like carbon dioxide into the atmosphere in the past 40 years by driving gasoline cars and burning coal and natural gas for electricity and heating and cooling buildings.

Using a comprehensive database, UNDRR found that from 2000 through 2019 there have been 7,348 huge disasters.

There is bad news for the US. Of these disasters, 577 struck China, 467 hit the US, and 321 struck India. The report notes that the US and the others most affected had large land masses with diverse landscapes, which were relatively densely populated.

These catastrophes of the twenty-first century killed 1.23 million people. Although about a third of them were killed by tsunamis and earthquakes, which aren’t climate-related, many of the rest of these deaths were from floods and storms that are. (There have always been floods and hurricanes, but their frequency and intensity has been increased by global heating, which warms the surface of the sea and puts more water in the atmosphere). One storm, Cyclone Nargis, in 2008 killed 138,000 people in Myanmar.

If even a sixth of the disaster deaths in these years could be attributed to the climate emergency, that would be like a huge hammer hurtling down from the sky and crushing to death the entire population Baton Rouge, La., or Spokane, Wa., or Richmond, Va.

Another 4.2 billion people were affected by these calamities; some of them were hit more than once!

The cost of these disasters was just about US $3 trillion. If even half of that was climate-related (excluding the tsunami and earthquakes), that would be like wiping out the entire annual production of goods and services of Russia.

In contrast, from 1980 to 1999, there had been 4,212 major natural disasters, which cost $1.63 trillion. So in these respects, natural disasters nearly doubled in number and cost in the past two decades.

The report concludes that the alarming increase of such catastrophes, and of their destructiveness, has been caused by climate change:

Most of these were storms and floods, but some of the other calamities were droughts wildfires, and “extreme temperature events.”

The way I figure it, there were 3,075 extra climate-related catastrophes in the past two decades, which accounts for virtually the entire increase in discrete disasters compared to the late 20th century.

How did we get here?

In 1750, there were roughly 270 parts per million of CO2 in the atmosphere, and a similar level had obtained for the previous 800,000 years or so. This is the period when hominids grew up, so we don’t really know how our species will fare with a radically different climate. 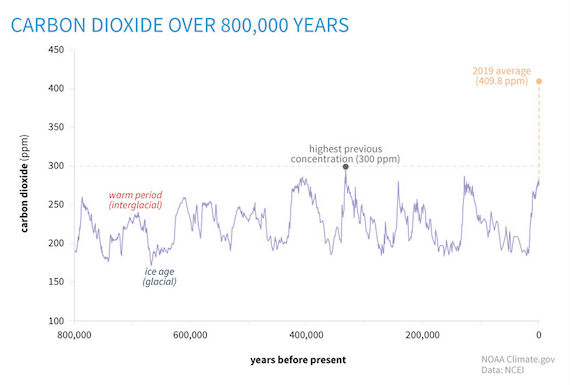 There are now 415 parts per million of carbon dioxide in the atmosphere. The last time the level was so high, in the Pliocene Epoch between 2.6 and 5.3 million years ago, the world was on average 5.2 degrees F. hotter (3 degrees C.) and there was little or no surface ice on Greenland or West Antarctica, which means sea levels were as much as 60 feet (20 meters) higher than they are today.

Sixty feet higher. The average elevation of Florida is 6 feet, so it is going under the water, the whole thing, except maybe the panhandle. Southern Louisiana is also in Davy Jones’ locker.

The average elevation of Washington, D.C. is only 150 feet, so a 60-foot rise would put a lot of it under the water, which is ironic, because few cities have connived more vigorously to put out as much carbon dioxide as possible as Washington, DC.

The 60 feet rise can be avoided partially if we stop using gasoline, coal and natural gas over the next 15 years, because some of the extra carbon dioxide will be absorbed by the oceans, and levels will begin going back down. But if we go on putting up 36 billion metric tons of carbon dioxide annually, we’ll use up our carbon budget and then that level of sea rise will be baked in.