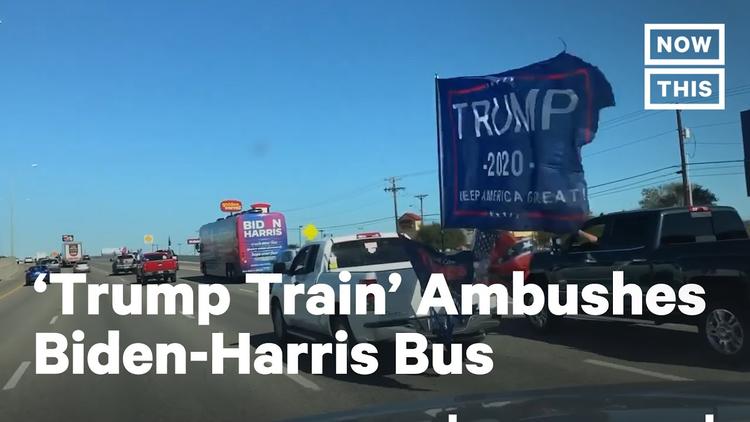 Ann Arbor (Informed Comment) – A talking point for the cult of Trump is the deleterious effects of “cancel culture.” What they mean by that is that they want pundits and politicians to be able to say offensive things and utter slurs against minorities and women without suffering any negative consequences for their careers. This attempt to depict a demand for decency as a price for having a public platform as a form of censorship is, of course, ridiculous. No one has a right to a perch on television or radio that allows them to reach millions. Those perches are a socially valuable and highly limited resource, and they should be occupied by people serving the whole public, not by bigots and hatemongers.

The irony, of course, is that the Trumpies are always demanding that people be canceled for daring disagree with the Orange One. On Friday, a whole caravan of hate was gotten up on a Texas highway, where vehicles festooned with Trump and MAGA insignia ambushed a Biden-Harris campaign bus carrying Democrats to a planned rally. At one point, a truck hit a staffer’s SUV as though attempting to roll it over and kill the occupants. Using cars to ram people is a common ISIL terrorist tactic, and was also used by a neo-Nazi Trump supporter at Charlottesville in 2017, killing Heather Heyer.

The bus was boxed in. The Democratic rally had to be canceled.

I study the Middle East, and have seen these sorts of attempts to stop democratic rallies on the part of Muslim fundamentalists or partisans of nationalist dictators, and it chills me to see it on I-35 going north out of San Antonio toward the state capital of Austin. That is likely the same road on which a pro-Trump individual drove to San Antonio on August 3, 2019 and killed 23 people.

But Trump rallies themselves, often hatefests with racist or male chauvinist chanting against the objects of Trump’s “two minutes hate” exercises, turn out to participate in cancel culture in another, deadly way. They are themselves engines of disease and death that have canceled hundreds of lives.

A Stanford University study released on Friday examined the after-effects of 18 Trump campaign gatherings June 20 – Sept. 30, using county coronavirus data. The researchers found a high likelihood that these rallies led to over 30,000 extra cases and over 700 deaths that might otherwise have been avoided. The research was carried out by B. Douglas Bernheim, Nina Buchmann, Zach Freitas-Groff and Sebastian Otero in the Department of Economics.

The economists focused on counties and cities that hosted Trump rallies in those weeks, comparing the rates and deaths to the period before the gatherings and also to other similar communities. They were careful to control for testing rates, so that can’t explain anything. They write,

“More interesting patterns emerge when we direct our attention to earlier weeks. Looking at Panels A and B, we see that in both rally counties, positivity rates rose sharply and quickly after the rally despite displaying no upward trend prior to the rally. For Marathon county [Wisconsin], the increase in positivity rates started immediately after the rally and continued to climb sharply for several weeks. For Winnebago county [Wisconsin], positivity rates roughly doubled over the first four weeks, and then continued to climb sharply. Testing did not rise immediately in either county.”

“Our analysis strongly supports the warnings and recommendations of public health officials concerning the risk of COVID-19 transmission at large group gatherings, particularly when the degree of compliance with guidelines concerning the use of masks and social distancing is low. The communities in which Trump rallies took place paid a high price in terms of disease and death.”

The American people have it in their power to stop this cancellation of our health, well-being and basic constitutional rights.

On Tuesday, they can cancel Trump.