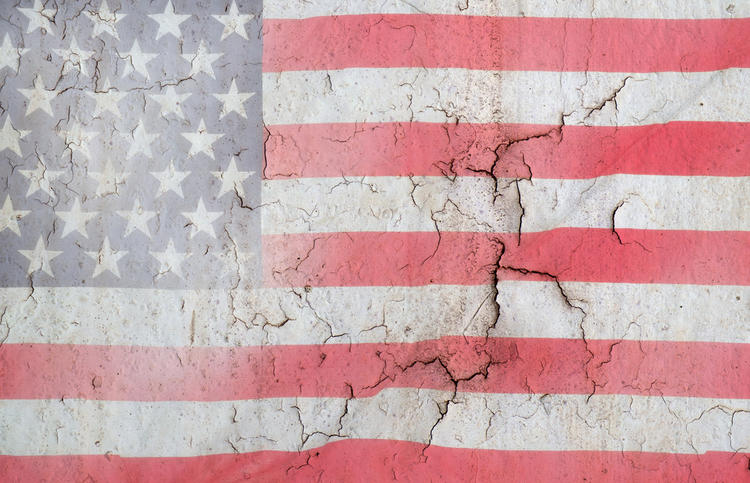 ( Foreign Policy in Focus ) – American democracy is in rough shape. It’s going to take more than this election to set it right.

You know about the five-second rule. According to conventional wisdom, food that has dropped on the floor can be safely eaten if retrieved within five seconds. Some scientists have even set up experiments to confirm this folk saying.

Of course, all bets are off if your toast falls on the floor buttered side down and you haven’t mopped the kitchen in recent memory.

Today, after a contentious election and with the results of the presidential race still uncertain, we are all now looking down at the ground. It’s been four years since Donald Trump dropped the buttered toast of our democracy onto the floor.

After four years face down in the dirt, can our democracy be picked up, dusted off, and restored to some semblance of integrity?

The polls made it look like Joe Biden would be an easy winner, maybe even in a landslide. The Democrats were expected to retake the Senate. The huge number of early votes — nearly 100 million — suggested that the 2020 turnout would be the greatest in more than 100 years. The Democratic Party is supposed to benefit from more souls at the polls.

The polls were off. If Joe Biden wins, he will do so by a slender margin and only after considerable legal wrangling by both parties. The Democrats are now a long shot to win control of the Senate. And the huge turnout has translated into Donald Trump getting more votes in 2020 than he did in 2016, more in fact than any Republican candidate in history.

Texas did not go blue. Neither did Florida or Ohio. The Republican Party went all in for Trump, and he delivered beyond his base.

But Arizona flipped. And Georgia might as well. If the infamous “Blue Wall” holds — at least Wisconsin and Michigan if not Pennsylvania — then Biden will become the next president.

Still, who in their right mind would want to lead the United States at this perilous moment? The pandemic is surging. The economy hasn’t climbed out of its hole. Donald Trump has applied his scorched-earth approach to both foreign and domestic policy. The Republican Party has demonstrated that it delights in playing dirty, refuses to compromise for the national good, and embraces the most malign of Trump’s many fictions from the uselessness of masks to the myth of climate change.

Exit polls, meanwhile, reveal a country divided by more than just party affiliation. Democrats, for instance, overwhelmingly want to contain the current pandemic while Republicans want to focus on reopening the economy. This dynamic explains why so many Trump voters believe the president better handles both the economy and the pandemic, even if the evidence of his mismanagement is obvious to everyone else.

Trump’s “law and order” message also proved influential among Republican voters, despite the president’s blatant violations of law and disruptions of order. Heck, according to a recent judicial ruling, even the president’s Commission on Law Enforcement broke the law!

Perhaps the most sobering conclusion from the election is that nearly half the country is indifferent to the actual mechanisms of democracy. They just don’t care that their president refused to endorse a peaceful transition of power if he loses. They don’t care that he has derided the very act of voting by insisting, as he did early Wednesday morning, on enlisting the Supreme Court in an effort to stop the counting of the remaining ballots (except in those states, like Arizona, where he hopes to catch up). Nor do they see anything wrong with the Republican Party’s efforts to keep certain groups of people away from the polls.

That doesn’t bode well for the future of American democracy, especially if the country continues to abide by the Electoral College. For the last several decades, U.S. presidential elections have resembled Groundhog’s Day — and I don’t mean the movie. Why should one groundhog determine the length of winter? Don’t the other groundhogs get a vote? Likewise, why should a voter in Pennsylvania matter more than a voter in Maryland or Wyoming?

Trump is not the only culprit here. The ground was dirty before he dropped our democracy on it.

The Democrats and their patronage systems, like Tammany Hall in New York and Richard Daley’s machine in Chicago, set some dismal precedents. But now it is the Republican Party that, to preserve its governing majority in the absence of a popular mandate, is warping the rules of the game and breaking the fair rules that remain.

Let’s say that Biden ekes out a victory. What’s the damage report on Trump’s four-year assault on democracy?

After the 2016 election, the pundit class asserted that one man, however powerful, could not tear down the 250-year-old edifice of American democracy. There was much talk of “guardrails” and “adults in the room,” all of which were supposed to contain the ungovernable id in the White House.

Over the course of four years, however, Trump systematically disposed of the supposed adults in the room — Rex Tillerson, Jim Mattis, John Kelly — in favor of yes-men (and one or two yes-women). In addition, through executive orders, judicial appointments, and obsessive Twittering, he moved the guardrails so that he could steer America wildly off the road.

Just before the 2018 midterm elections, I wrote, “it would be poetic justice if what’s left of the mechanisms of democracy — voting, the courts, and the press — can still be used to defeat a potential autocrat, his family, and all the putative adults he’s brought into the room to implement his profoundly anti-democratic program.”

Over the last two years, those mechanisms were in fact on full display. Despite Trump’s full-court press, the judiciary has represented an important check on his power, by blocking some of his attacks on immigrants, his efforts to withhold his financial information, and to throw out ballots.

The mainstream media, meanwhile, continued to nip at Trump’s ankles. The New York Times, for example, published one expose after another about Trump’s record on the pandemic, his taxes, his financial relations with China, and so on.

And now the voters have had their say. Despite all the efforts by the Republican Party to suppress the vote, around 67 percent of eligible voters turned out in 2020, the highest percentage since 1900. Trump supporters did what they could to push against that tide. They intimidated voters. They disrupted Biden events and even tried to run a Biden bus off the road in Texas. They restricted the number of ballot drop-off locations. The post office, run by a Trump appointee, ignored a court order to locate 300,000 mail-in ballots at risk of not being delivered. But voters gonna vote.

Let’s also salute all the people who have made that vote possible. Despite a pandemic, tens of thousands of people showed up to staff polling sites and count ballots. Then there are all the volunteers who participated in get-out-the-vote campaigns by knocking on doors, making phone calls, sending texts, and doing the grassroots fundraising to keep the operations going.

Democracy, in other words, is not just about the politicians and the voters. It requires an immense effort by a veritable army of people. They, not the candidates, are the winners of the 2020 election.

Trump is not done. Even if he doesn’t get his presumed entitlement of four more years, he has two more months to trash his frat house of a presidency before turning it over to the next administration. That means more executive orders like the recent ones that opened up Alaska’s Tongass National Forest to logging and removed workplace protections from federal civil servants.

If Biden manages to take his place in the Oval Office, he’ll likely face a Republican-controlled Senate that will block his every move (just as the Republicans adopted a no-compromise position after the election of Barack Obama).

Certainly, Biden aims to reverse many of Trump’s executive orders with his own executive orders. That will work in the foreign policy realm, for instance recommitting the United States to the Paris climate accords. But any domestic orders will face court challenges, and suddenly the Republican Party’s strategy of pushing through an unprecedented number of federal judges takes on an even more ominous cast.

Popular will be damned. The Republicans will rely on senators, lawyers, and judges to institutionalize Trump’s legacy.

Unlike 2008, the Democrats will be hard-pressed this time to claim an overwhelming popular mandate after such a close election. Trump voters, meanwhile, are not going away. They’ll continue showing up with guns. They’ll refuse to wear masks. They’ll spread fake news and outlandish conspiracy theories.

They’ll also challenge the federal government — now led by an adversary, not an ally — at every turn. Remember the 2016 standoff at the Malheur National Wildlife Refuge when a bunch of right-wing extremists seized government property and faced off against law enforcement? Expect an uptick in outright confrontations between federalists and anti-federalists during the Biden presidency.

Let’s face it: The democracy that Donald Trump dropped on the floor suffered a great deal from the experience. It’s going to take more than an election to put it right.