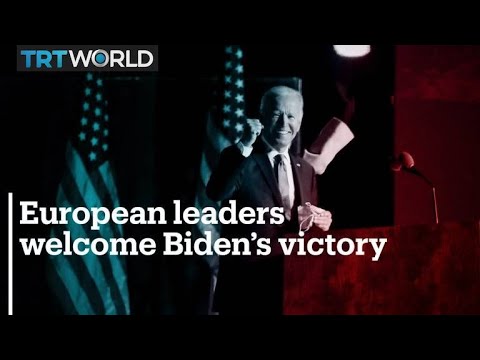 ( Clean Energy Wire ) – European leaders, researchers and media commentators breathed a collective sigh of relief following Joe Biden’s victory in the US presidential elections and expressed hope for a new partnership on combating climate change. The news fuelled expectations that the new president will re-join the

German chancellor Angela Merkel congratulated Joe Biden and Kamala Harris on their victory, saying she was looking forward to working with them. The European Union, Germany and the US would have to stand together to overcome the most important global challenges. “We stand side by side in the fight against global warming and its worldwide effects,” she said in a press statement on Monday morning.

The United States is and remains Europe’s closest ally in the world, and combating climate change will be on top of the agenda to further deepen this relationship under next president Joe Biden, writes finance minister Olaf Scholz in an op-ed for Spiegel Online. “Not to cover up the obvious with diplomatic rhetoric: Like many of my counterparts across Europe, I am relieved.”

Not everything will be different under Biden, writes Scholz. “But we can hope that Joe Biden will mark the end of the current president’s course against international cooperation, multilateralism and the functioning of international organisations.” With his pledge to re-enter the

“Not to cover up the obvious with diplomatic rhetoric: Like many of my counterparts across Europe, I am relieved.”

Svenja Schulze, Germany’s environment minister said in a tweet: “With a President Joe Biden and a Vice-President Kamala Harris, international cooperation and committed climate policy will return to the White House. I look forward to the revived cooperation with Washington and I am confident that the US administration will become a strong ally in the fight against climate change and the greening of the global economy.”

Biden’s announcement to re-enter the

Altmaier cautioned that Biden would not forget issues, such as Germany’s foreign trade surplus. “I believe that some of the problems will continue to concern us, but with the chance to find common solutions.” The minister called for a “broad-based industrial tariff agreement between the US and the European Union.” He added that German carmakers’ factories in the US were a sign that his country was ready to invest there and create jobs.

European Commission president Ursula von der Leyen congratulated Biden and said the “renewed” EU-US partnership would be important to tackle challenges in a changing world. “The European Commission stands ready to intensify cooperation with the new Administration and the new Congress to address pressing challenges we face and notably: fighting the COVID-19 pandemic and its economic and social consequences, tackling climate change together, promoting a digital transformation that benefits people, strengthening our common security, as well as reforming the rules-based multilateral system.”

Other European Union officials also pointed to the change they are expecting. “We very much look forward to this new transatlantic partnership,” said trade Commissioner Valdis Dombrovskis in a message on Twitter. Today (9 November), showing clearly the state of current transatlantic relations, Dombrovskis announced the EU would impose tariffs on imports of 4 billion US dollars in US goods, as part of a long-running US-EU battle over civil aviation subsidies.

The French minister for the ecologic transition, Barbara Pompili, congratulated Biden and Harris on Twitter. “Only weeks before the 5th anniversary of the

Spanish environment minister Teresa Ribera likewise congratulated the president-elect and offered a whole list of expectations in environmental policy cooperation for the incoming Democratic administration. Among these, Ribera said, would be “science based decisions” that are particularly important with respect to health and climate policy. She voiced hopes that the new US government will help accelerate the spread of renewable energy sources, boost green finance principles and help achieve technological breakthroughs.

Claudia Kemfert, professor for energy economics and energy policy at the German Institute for Economic Research, has warned on Twitter that not everything will change under Biden. “Biden also considers

Joe Biden’s election victory truly marks “a new beginning,” Ottmar Edenhofer, director and chief economist of the Potsdam Institute for Climate Impact Research (PIK), said in an interview with Der Spiegel. Although Biden’s political scope is limited if the Republicans keep the majority in the Senate, he can reform the rules for the electricity and energy sector, according to Edenhofer. When it comes to international climate action by the EU, China and the US, “Europe in particular has an important task,” Edenhofer said, for example by setting a proposal for a CO2 pricing system that includes other world regions.

“The election of Joe Biden is a victory for democracy and the climate movement,” Greenpeace Germany’s executive director Martin Kaiser said, mentioning Bidens plans to rejoin the

Christoph Bals, policy director at Germanwatch, said in a press release: “The change at the top of the US massively increases the chances for effective international climate policy.” The EU should immediately explore what agreements are possible between a new US administration and other partners in climate protection and supporting poorer countries through climate financing, Bals said. “The German government, which holds the presidency of the EU Council until the end of the year, can start laying the foundations for this.”

“Biden promised the most ambitious climate programme ever presented by a presidential candidate during his election campaign,” Kurt Stukenberg writes in an opinion piece in Der Spiegel. However, Biden faces hurdles on the way to climate protection, according to Stukenberg. The president-elect has yet to present reduction targets for the next years, and to push through his climate plans he needs the support of the US Congress – which will be difficult in case of a Republican majority there. But even with only the means available to him, Biden could achieve a lot of progress, Stukenberg says:. “He could instruct the US Environmental Protection Agency to set stricter emission limits for power plants in order to come closer to his goal of a regenerative power supply by 2035, withdraw the facilitations for oil and gas production on public land introduced under Trump and reintroduce stricter regulations for methane emissions from gas production.”

Despite Joe Biden’s expectations and ambitions, making the US climate-neutral by 2050 will not be easy, as the new US administration will find itself in a “climate policy debris field,” writes Bernhard Pötter in the taz. “According to a Washington Post analysis, Trump and his followers have watered down or abolished a total of 125 environmental standards and laws; the Environmental Protection Agency (EPA) and the State Department, both central to energy and climate policy, have been destroyed from within by Trump’s troops, and many experts have turned their backs on the authorities.”

“As big as the shock was four years ago when Trump won the election in the middle of the climate conference in Marrakech,” Susanne Dröge, climate expert at the Stiftung Wissenschaft und Politik (SWP) told taz, “so big are the expectations now that much will change under Biden.”

Companies can expect more planning security from Joe Biden, but also more regulations, Astrid Dörner, Moritz Koch and Katharina Hort write in Handelsblatt. Amongst other things, Biden plans more tax incentives for car buyers. For German manufacturers like VW, BMW and Mercedes, who have local factories in the USA, this creates an incentive to speed up their own e-car production. Biden is also likely to tighten the regulations for emissions. In California, BMW and VW, together with Honda and Ford, have voluntarily committed to reducing their emissions.