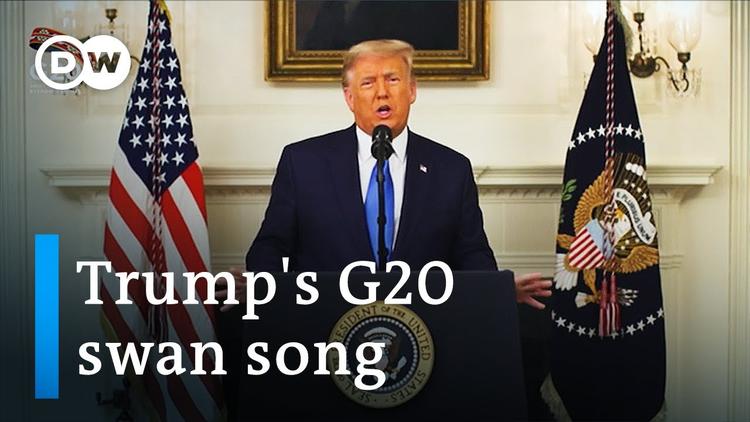 Ann Arbor (Informed Comment) – DW gives a clip of Trump’s unhinged video rant to the G20 summit against the Paris Climate Accord on Sunday, which is being held virtually this year.

Trump said, according to Kevin Liptak at CNN,

The Paris Accord allowed countries to set their own goals for reduction of carbon dioxide and methane emissions, so it could hardly have been weaponized against the US economy.

Coal, gas and petroleum produce heat-trapping and very dangerous carbon dioxide when they are burned, which is wrecking the planet with global heating, sea level rise, extreme weather, more intensive hurricanes, drought, and wildfires, among other undesirable and even apocalyptic threats.

A Trump-style anything-goes inaction on the climate emergency could cost the US $5.2 trillion by 2050, according to the Rocky Mountain Institute. Trump either is too stupid to understand the dangers here or is just greedy and holds a lot of stock in fossil fuel corporations. I suspect it is a combination of the two. That he says brain dead things like that wind turbines cause cancer or that the climate crisis is a Chinese hoax suggests that he isn’t very bright, or that he think the public isn’t and he is trying to make money off dirty energy.

The industries Trump wants to save, like coal and petroleum, are doomed by market forces and anyway don’t employ all that many people. Solar and wind now employ many times more people than coal.

Despite all Trump’s efforts to prop up the coal industry, it lost 24% of its jobs under this president.

Making electricity from coal is typically estimated to cost 5 cents a kilowatt hour. New wind installations in the US are averaging 2 cents a kilowatt hour. So let’s say your monthly electricity bill is $200 a month in the summer on coal. If your local utility put in a wind farm instead, in much of the country, it would be $80. Are you really going to spend an extra $120 a month for the next decade just because you like Donald Trump? If so, you are alone.

As Business Insider points out, Moody’s ranked Trump’s economic plans against those of Joe Biden and concluded that Biden will create 7 million more jobs than Trump would have, and Biden would give a $4,800 raise to the average American household.

“The United States is now the number one producer of oil and natural gas in the world. Every day we are proving we can protect our workers, create new jobs and safeguard the environment without imposing crippling mandates and one-sided international agreements on our citizens.”

You cannot safeguard the environment if you are putting over 5 billion metric tons of carbon dioxide into the atmosphere annually. Trump boasts that the amount of carbon the US emits has declined slightly. That is mainly because we are now getting 20% of our electricity from renewables and because natural gas plants have replaced a lot of coal plants, with gas being cheaper and about half as carbon intensive. In other words, the slight decline in CO2 emissions has occurred despite Trump’s policies. But the larger issue is that the CO2 stays up there once it is put into the atmosphere. It is cumulative. After the oceans exhaust their ability to absorb it, which will happen soon, some of the CO2 could stay up there for 100,000 years. So think of it like this. You weigh 240 pounds and you want to lose weight. You were putting on 10 pounds a year lately. So this year you only put on 9 pounds, and went to 249. You wanted to lose weight. Reducing the amount of extra weight you put on isn’t reducing weight. You’re getting fatter, just at a slower rate. So the US put out 5.2 billion metric tons of carbon dioxide in 2018 and 5.1 in 2019. That’s what trump is boasting about? That in two years we put out over 10 billion tons of carbon dioxide? It is a very powerful heat trapping gas, which acts as though you were setting off atom bombs in the atmosphere.

Trump tried to appeal to the “old environmentalism,” claiming to have devoted efforts for clean water, and to have championed national parks (which he actually leased to polluters and oil drillers).

The US does not, as Trump keeps lying, have the cleanest air in the world. US air is quite dirty, and Trump made it substantially dirtier, as Hilary Brueck pointed out at Business Insider. The air pollution is mainly caused by precisely those fossil fuels that Trump has championed, especially coal, but also gasoline and diesel. For Trump to push coal and then tout clean air is like a toddler pooping his pants and then boasting of how good he smells.

The US ranks 7 to 10th on important indices of air quality, and we finish off 80,000 to 150,000 people a year with our bad air. 111 million Americans live in locales with more air pollution that our 2017 standards allow. Air quality can be measured in several ways, by how much PM 2.5 particulate matter is in the air, but also by the ozone levels. The US fares all right (but below 6-9 other countries) on PM 2.5, but it is very bad on ozone. The EPA explains, “Breathing ozone can trigger a variety of health problems including chest pain, coughing, throat irritation, and airway inflammation. It also can reduce lung function and harm lung tissue. Ozone can worsen bronchitis, emphysema, and asthma, leading to increased medical care.”

Everything Trump says about the environment and about fossil fuels, carbon dioxide and the climate threat is not just false but absurd. Why exactly he spouts this world-destroying nonsense will be up to future psychiatrists to tell us. Maybe they can pickle his brain and study its abnormalities once he shuffles off this mortal coil.

The good news is that I won’t have to write this column refuting his enormities for much longer. Adults are about to take over climate policy, and while they won’t be in as much of a hurry or stricken by as much alarm as I am, there is a prospect of substantial change. Just a modicum of government help for renewables could well create a technological disruption and suddenly we’d have electric cars and solar farms on the scale we have smartphones.