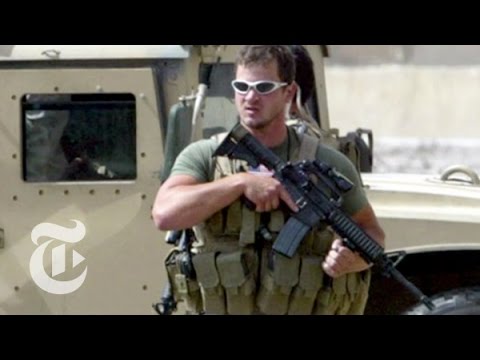 Ann Arbor (Informed Comment) – On Tuesday, Trump the Mad pardoned 4 Blackwater mercenaries who killed 14 Iraqi civilians, including a nine-year-old boy, with indiscriminate fire at Nisour Square in downtown Baghdad on September 14, 2007. The four were convicted at then VP Joe Biden’s insistence, and were serving jail terms.

WaPo says, “Investigators for the military and the FBI later described the shootings, in which the contractors unleashed a blaze of gunfire and grenade explosions in a busy Baghdad square, as unprovoked and unjustified. Federal prosecutors said that many of the victims, including women and children, some with their hands in the air, “were shot inside of civilian vehicles while attempting to flee.”

Trump’s four years in office have been one big effort at running interference for white supremacy, and it is the real reason for these pardons.

The US still has 50,000 civilian contractors (performing various tasks, including security) in the Middle East, with 30,000 in Iraq, Syria, and Afghanistan.

I thought it might be interesting on this day, which will live in infamy in Iraq, to go back to see how Informed Comment covered this crisis as it unfolded in fall of 2007. Here was my attempt to catch history on the run:

McClatchy reports from Baghdad that Iraqi eyewitnesses maintain that Blackwater security guards fired at civilians without provocation on Sunday, in contrast to the company’s own story about the incident. Probably they were firing at a car that neglected to stop when told to, or neglected to stop fast enough. Since such vehicles might be driven by suicide bombers, American military and civilian security forces have often opened fire on innocent Iraqis who just did not hear or did not understand the command to halt their vehicles, or who panicked and sped up. The offending car in this instance had a family of three in it, including a toddler who ended up being melted to his mother’s body in the resulting conflagration.

Al-Hayat reports in Arabic that Condi Rice personally apologized to Iraqi Prime Minister Nuri al-Maliki for the killing of 10 Iraqis by Blackwater guards and promised that steps would be taken to ensure the tragedy was not repeated. The Iraqis are from all accounts absolutely furious about the Blackwater cowboys running around their country armed and dangerous and acting with impunity. The State Department, which employs Blackwater, is highly embarrassed and has ordered State Dept. personnel in Iraq not to circulate for the time being. Debate is raging over whether Iraq has the right to try the apparently trigger-happy civilian security men of Blackwater.

McClatchy reports that Iraqi Prime Minister Nuri al-Maliki has suspended the license of Blackwater to operate in Iraq while it is under investigation for recklessly killing civilians. Al-Maliki pointed to seven discrete incidents. An aide said that the Americans seemed shocked that the Iraqis were making a stand on the issue. Apparently sympathy with Iraqis about their innocent civilians being shot up by cowboys hired by a private American firm is not widespread in the Green Zone.

One experienced reader wrote me that the Iraqi government stance is reasonable, that foreign security guards should be accountable in some legal system. If Iraq cannot try them (by virtue of a fiat issued by American Viceroy Paul Bremer), and if they are not all Americans and so can’t all be tried in US domestic courts, then they are essentially operating beyond the reach of any court of law. That situation is unacceptable to anyone who cares about the rule of law.

By the way, complaints about the immunity of foreigners to prosecution in local courts (called ‘extra-territoriality’ by historians) were among the grievances that fueled the Khomeini movement in Iran from the 1960s (servicemen on bases in Iran had such immunity, and Khomeini used the unpopularity of this injury to national sovereignty to whip up anti-American sentiment). Paul Bremer and Donald Rumsfeld appear not to have learned any lessons from all that.

The US Congress may attempt to intervene by passing legislation on accountability for private US firms operating in Iraq. There are some 180,000 private individual contractors in Iraq, mostly working for US firms or subcontracting from the US government.

Iraqi authorities said Saturday that they have a videotape of the shootings in Nisur Square last Sunday by Blackwater security guards, which shows that they fired without provocation. The company has maintained that its personnel were responding to incoming fire. There is now talk in Baghdad of trying the guards, though a decree by US viceroy Paul Bremer may hold the US nationals harmless.

Meanwhile, charges surfaced that Blackwater employees had shipped weapons to Iraq without proper paperwork, which could be interpreted as a form of arms smuggling. The company denies the charges.

The Iraqi government is backing off its demand that the Blackwater security firm be expelled from Iraq in the wake of apparently unprovoked shootings that left 11 Iraqis dead, according to the LAT. Apparently the argument has been made to Prime Minister Nuri al-Maliki that the 1,000 Blackwater guards who escort US embassy personnel would have to be replaced by troops, who would have to be pulled out of their current attempt to drive Sunni Arab militants out of Baghdad neighborhoods . . .

A big feature of the literature on decolonization is the delight leaders such as Gamal Abdul Nasser and Ruhollah Khomeini took in abrogating laws bestowing ‘extra-territoriality’ on colonial personnel and even just civilians from the metropole, while in the subject country. Now extra-territoriality is back with a vengeance; and, of course, no colonial enterprise can be run without it. One can’t have persons of the superior race hauled before a native judge; bad show, old boy, to let the wily oriental gentlemen get the upper hand that way.

Iraqi authorities are not only accusing Blackwater guards of an unprovoked shooting of 11 persons at Nisur Square on Sept. 16, but also of engaging in an hour-long firefight with Iraqi police later that day. The firm appears to have deployed attack helicopters in the firefights.

The NYT reports that a new congressional report on the Blackwater security firm in Iraq reveals many instances of guards killing Iraqis, and sometimes trying to cover it up. They are said to have been involved in nearly 200 shootings since 2005. Congress slammed the State Department in Iraq for exercising virtually no oversight over the private firm, which has a contract from State. In fact, State appears to have been part of the cover-ups.

The LA Times reports that Blackwater has fired 121 of its guards in Iraq, mostly for weapons-related issues, during the past 3 years. It has a little over 800 employees in Iraq.

P. W. Singer at Salon.com suggests that the use of private armies has harmed the US ability to win wars, including Iraq.

Although many commentators seem to find the use of private armies strange, they have been a feature of colonial wars all along. It is now often forgotten that the paramilitary of the British East India Company conquered North India in 1757-1764, not the regular armies of the British government. It has been argued that the Mughal Empire appointed the East India Company as its revenue minister (Divan), and that in essence this part of the government swallowed the rest. Once the company had much of India, the British government gave it a seat on the cabinet (so it went from being Divan of the Mughal Empire to cabinet minister in the British Empire). Don’t tell Bush and Cheney, or they’ll create a Secretary of Blackwater for the US government.

Although the Iraqis managed to compel the withdrawal of US troops by the end of last year, Washington is nevertheless seeking to remain influential through shadow power. The US embassy in Baghdad has 16,000 employees, most of them civilian contractors. They include 2,000 diplomats and several hundred intelligence operatives. By contrast, the entire US Foreign Service corps comprises fewer than 14,000. The Obama administration has decided to slash the number of contractors, planning for an embassy force of “only” 8,000. This monument to shadow power clearly is not intended merely to represent US interests in Iraq but rather to shape that country and to serve as a command center for the eastern reaches of the greater Middle East. The US shadow warriors will, for instance, attempt to block “the influence of Iran,” according to the Washington Post. Since Iraq’s Shiite political parties, which dominate Parliament and the cabinet, are often close to Iran, that charge would inescapably involve meddling in internal Iraqi politics . . .

“The increasingly frequent use of civilian “security contractors”—essentially mercenaries—should be a sore point for Americans. The tens of thousands of mercenaries deployed in Iraq were crucial to the US occupation of that country, but they also demonstrate the severe drawbacks of using shadow warriors. Ignorance about local attitudes, arrogance and lack of coordination with the US military and with local police and military led to fiascoes such as the 2007 shootings at Baghdad’s Nisour Square, where Blackwater employees killed seventeen Iraqis. The Iraqi government ultimately expelled Blackwater, even before it did the same with the US military, which had brought the contractors into their country.”