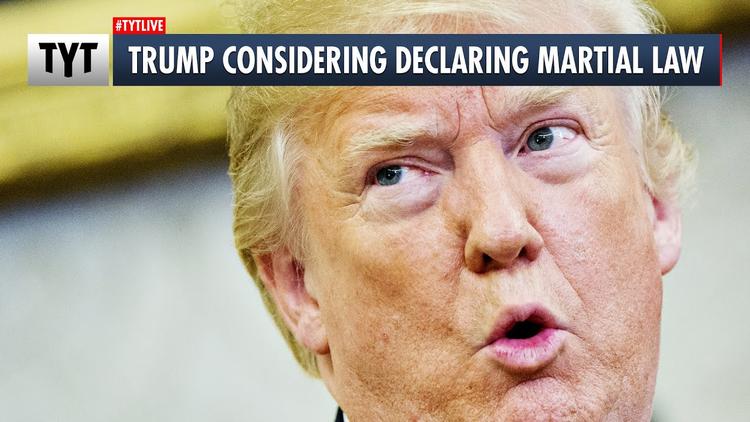 Boise, Idaho (Special to Informed Comment) – On Tuesday, December 1, Michael Flynn, the beneficiary of President Trump’s recent pardon, published a manifesto calling on President Trump to suspend the Constitution and declare martial law so that the military could organize and run a new election for President to void the recent election which was lost by the President. The core of the manifesto called for the President to “immediately declare a limited form of martial law, and temporarily suspend the Constitution and civilian control of these federal elections, for the sole purpose of having the military oversee a national re-vote.” Flynn’s position was immediately amplified in print and electronic media by far-right groups such as We The People Coalition (WTPC).

It appears that the President was listening because on the day after Flynn’s manifesto and the related WTPC ad were released, his 46 minute Facebook rant included a call for a re-vote. While Flynn’s manifesto is ludicrous on its face because it amounts to incitement of a coup against the Constitution, the President has demonstrated in the weeks since he lost the election that he is becoming increasingly unhinged such that it is not inconceivable that he could take Flynn’s call-out seriously.

That begs the question of what would happen if President Trump were to actually adopt Flynn’s position and declare a suspension of the Constitution and attempt to impose martial law. Because of the President’s fragile mental state and desperation to overturn his loss of the election, this question needs to be considered so that we know what the range of outcomes would be and what to expect.

If the President were to decide to act on Flynn’s proposal, he would first issue an order to declare martial law, to suspend the Constitution, to declare the recent election void as to the office of President, and to order a new election. He would then have to give orders to the military leadership to implement martial law and to undertake organization and administration of the election. By decapitating the civilian leadership of the Pentagon in early November, including Secretary of Defense Esper and the leadership layer immediately below him, and replacing them with totally incompetent, but personally loyal, operatives, Trump has assured that he will get no pushback against such orders from the civilian level.

The same cannot be said of the military leadership, both at the Joint Chiefs level and at the level of operational commands. Military leaders and the Judge Advocate officers who support them tend to take their oath of appointment to “support and defend the Constitution” very seriously. The Chairman of the Joint Chiefs, General Mark Milley, is the leading case in point. In August of this year, in responding to questions from members of the House Armed Services Committee about how he would respond to an order from the President to use the military for political gain, he said forcefully, “I will not follow an unlawful order.”

More specifically with respect to the possibility of an order to have the military intervene in the electoral process, he said, “I foresee no role for the U.S. armed forces in this process.” At the levels of command below the Joint Chiefs, a commander who receives an order that is of questionable legality will automatically consult with his or her Judge Advocates, who will assess the legality of the order. If it is determined that the order is unlawful, the commander is obligated not to obey it. The question of whether President Trump’s order to implement martial law will be implemented by the military, then, comes down to whether it is determined by the military leadership, with the support of their Judge Advocates, to be lawful.

There are two possible ways in which the President could order the military to implement martial law. One might be called “martial law lite” because it is not true martial law, but rather the use of the armed forces as a “posse comitatus,” i.e. as a law enforcement body to carry out the President’s directives. The other is actual martial law, whereby civil authority is suspended and military authority is imposed in its place, i.e. the military takes control of all law enforcement and judiciary functions pursuant to a suspension of the Constitution and existing laws. The military leadership and their Judge Advocates would have to determine the lawfulness of whichever of these two forms they were ordered to implement, as follows:

– Posse comitatus – Federal law, specifically the Posse Comitatus Act, 18 U.S. Code Sec. 1385, prohibits the use of the armed forces as a posse comitatus, i.e. in civilian law enforcement, except as “expressly authorized by the Constitution or Act of Congress. . . .” There is nothing in the Constitution that authorizes use of the armed forces as a posse comitatus. The only statutory provision to which the President could potentially point for such authority is the Insurrection Act, 10 U.S. Code Sec. 252, which is supplemented by the provisions in 10 U.S. Code Sections 332 through 334. Sections 252 and 332 both provide that if the President finds “that unlawful obstructions, combinations, or assemblages, or rebellion against the authority of the United States, make it impracticable to enforce the laws of the United States in any State by the ordinary course of judicial proceedings,” he may call the National Guard of the state to active duty or use the active duty armed forces “to enforce those laws or to suppress the rebellion.” [Emphasis added.] The scope of the Insurrection Act is, then, limited to specific cases of unlawful actions or rebellion against federal authority. Further, it may be invoked only against actions within a state, not across the entirety of the United States. It is clear, then, that a Presidential order to suspend the Constitution for the purpose of holding a new election under military control, purportedly under the authority of the Insurrection Act, would not be lawful. First, there are no ongoing actions that could reasonably be deemed to be an “unlawful obstructions, combinations, or assemblages, or rebellion. . . .” Second, there is no way that conducting a new election could be framed as a response to such actions, even if they existed. And third, such an order would apply to the entire country, not a state. Therefore, an order to the military based on the Insurrection Act would on its face be unlawful, and therefore would not be obeyed by the military.

– Martial law – The imposition of full-blown martial law whereby all of the existing law enforcement and judicial functions are displaced by military law and structures pursuant to suspension of the Constitution is nowhere permitted by the Constitution, so would be unlawful on its face. The only provision for suspension of any legal protection in the Constitution is the provision in Article I, Section 9, paragraph 2, which provides that, “. . . Habeas Corpus shall not be suspended, unless when in Cases of Rebellion or Invasion the public Safety may require it.” Note that this limited provision is in Article I, which governs the Legislative branch, so it is not available to the Executive branch. Flynn’s manifesto and the related WTPC ad cite President Lincoln’s invocation of martial law, which required the suspension of Habaus Corpus, as precedent supporting a President’s power to suspend the Constitution in its entirety and to impose martial law. Aside from the fact that Lincoln’s suspension of Habeas Corpus would in no way serve as precedent for wholesale suspension of the entire Constitution, as Flynn and WTPC suggest, Flynn and WTPC totally overlook the fact that the Supreme Court held Lincoln’s action to be unconstitutional in the case of ex parte Milligan (71 US 2 [1866]). The Court in Milligan closely limited the circumstances in which martial law is permissible in saying, “If, in foreign invasion or civil war, the courts are actually closed, and it is impossible to administer criminal justice according to law, then, on the theatre of active military operations, where war really prevails, there is a necessity to furnish a substitute for the civil authority. . . .” The Court went on to say, “Martial rule can never exist where the courts are open, and in the proper and unobstructed exercise of their jurisdiction. It is also confined to the locality of actual war.” There is no “actual war” going on inside the United States, nor are the civilian courts “actually closed.” It could not be clearer that imposition of martial law under a suspension of the Constitution is absolutely impermissible, and any order given by the President in such case is on its face unlawful. Such an order would not, therefore, be obeyed by the military.

The conclusion is that the military, from GEN Milley down through the operational commands, would not obey an order to enforce martial law and to administer a new election. The question remains as to what would follow the military’s refusal. The simplest answer is that nothing would have to happen – civil authority would go on until the problem is resolved on January 20 when Donald Trump leaves the White House, either voluntarily or kicking and screaming at the hands of the Secret Service under the direction of President Biden. But it is likely that there would also be litigation that could reach the Supreme Court on an expedited basis, which should change nothing – not even the Republican-packed Court could find a way to make President Trump’s action lawful.

There is a question whether such an action by the President, as well as the contributing actions of Flynn, WTPC and others who advocated for the action, could be charged under 18 U.S. Code Sec. 2385, which makes it a crime to advocate overthrow of the government. But that can be addressed at a later time, if it becomes ripe.

In closing, I will add a comment that is personal to me as a retired military officer. Michael Flynn is a retired U.S. Army Lieutenant General. When he was commissioned many years ago, he swore to “support and defend the Constitution of the United States against all enemies, foreign and domestic; [and to] bear true faith and allegiance to the same.” That oath does not lapse. His call to suspend that Constitution, to forcibly implement martial law, and to conduct an election in violation of the Constitution, stains the uniform which all of us who are or were members of the armed forces wore. Even if he never faces legal consequences for his blatant violation of his sacred oath, he will forever bear the shame of it.