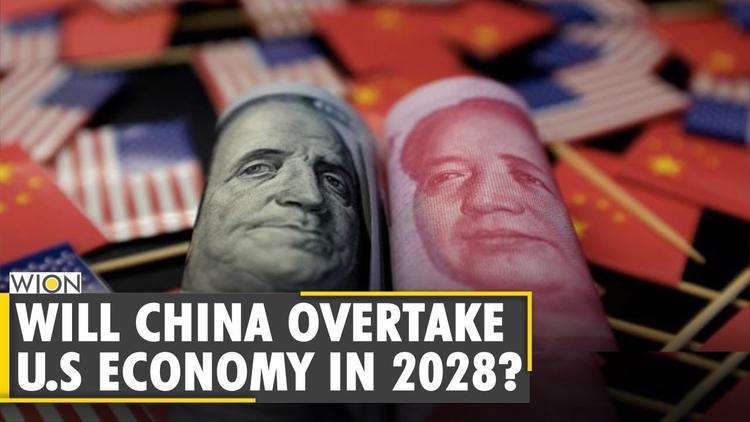 Ann Arbor (Informed Comment) – The twentieth century was dubbed “the American Century” in 1941 by Time magazine publisher Henry Luce. Luce hoped that Americans would abandon their isolationism and seek international allies, joining against the Axis in WW II. It was then more wishful thinking on his part than reality, but his wish arguably came true.

It seems increasingly clear that the 21st century will be the Chinese century. And, China is going to get there sooner thanks to a new isolationism and a paroxysm of ignorant reality-denial for which Donald J. Trump has been the cheerleader and chief implementation officer.

The BBC reports that a British think tank predicts that China will overtake the US as the world’s largest economy in 2028 instead of 2033, as a result of its deft handling of the pandemic and as a result of outgoing president Trump’s monumental screw-up, the largest public health disaster in American history.

By the way, the report of the Centre for Economics and Business Research (CEBR) is using more scientific means to come to the same conclusion that I did earlier this year. On October 19, I asked, Will historians look back at Trump’s disastrous Pandemic Response as the Moment Beijing Overtook the US?

China will grow 2% this year. The US economy will contract 3.5%. China’s growth is enabled by government health policy.

Even next year and through the 2020s, American growth is expected to be anemic. In contrast, China will likely grow 5 percent a year for a while starting next year, then as it matures further as an advanced economy, fall to 4% growth.

And it isn’t just a matter of growth rate. The US comes out of four catastrophic years of Trump with a massively ballooning budget deficit.

One of the most important growth sectors in this century will be green technologies, a sector in which China has developed a worrying lead over the United States. China is responsible for 23% of global green energy investment. It is the world’s largest maker of wind turbines and produces 63% of the world’s photovoltaic panels.

The US government is hostage to Big Oil and has not moved fast enough or vigorously enough to outperform China in this area. Only about 19% of US electricity is from renewables, which means we are paying trillions for fuel, whereas sunshine and wind are free.

Some analysts expect China’s energy mix to be 62% renewables by 2030, with massive cost savings of 9%.

President-elect Biden wants a 100% green electricity by 2035, but given that he will very likely not have the Senate, it isn’t clear he can in fact move that fast. I hope so, because otherwise China is going to eat our lunch.

I keep hearing people say that the pandemic isn’t really Trump’s fault. It makes me want to tear my hair out. The fact of the pandemic was not his fault, of course. But that you had no national health policy to speak of was his fault. He closed down the economy too late and opened it too early. He left states to compete for scarce resources, driving up their costs. He refused to encourage mask-wearing (82% of Chinese masked up, only about half of Americans did). Early on, China had a testing and contact tracing capability that allowed them to contain outbreaks. They’ve gone long stretches since the summer without having new case reported at all. The US never had enough tests, and results were coming back beyond the 3-day limit of when they were useful. We had no national contact tracing corps, no ethos of quarantining once you’ve been exposed. We quickly went to community spread, at which point there are too many people to carry out effect contact tracing. State and county public health offices had been shrunk by long years of austerity — tax cuts for the wealthy, fewer services for ordinary folk. China nipped this thing in the bud (as did South Korea and Taiwan). Trump, by a combination of bad policy and no policy, let the thing snowball– so that states have had to impose repeated shutdowns on a rolling basis, deeply harming the economy.