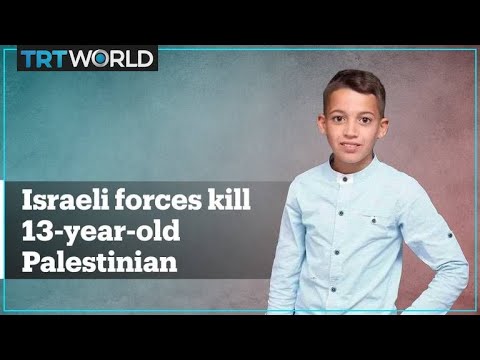 ( Middle East Monitor) – Last Friday, Israeli occupation forces shot dead 13-year-old Palestinian boy Ali Abu Alia during a protest against the construction of an Israeli settlement in the village of Al-Mughayyir, north of the West Bank city of Ramallah.

The harrowing killing of the Palestinian child was widely condemned with the United Nations Special Coordinator for the Middle East Peace Process Nickolay Mladenov tweeting: “Appalled by the killing of a 15-year-old Palestinian boy (13 according to the Palestinian Ministry of Health), Ali Abu Alia, near Ramallah today.”

After reporting the killing on its official Twitter account, the European Union (EU) delegation to the Palestinians stated: “Children enjoy special protection under international law,” posing the age-old question: “How many more Palestinian children will be subject to the excessive use of lethal force by the Israeli security forces?”

In his tweet, Mladenov conveyed: “Israel must swiftly and independently investigate this shocking and unacceptable incident. Children enjoy special protection under international law and must be protected from violence.” Meanwhile, the EU delegation to the Palestinians expressed: “This shocking incident must be swiftly and fully investigated by the Israeli authorities in order to bring the perpetrators to justice.”

Following the broad condemnation of the killing, a spokesman of the Israeli army did not acknowledge the Israeli army’s responsibility for the killing and affirmed that the incident “will be looked into.” In a statement, the Israeli occupation army disclosed: “The [Israel Defence Forces] is aware of the claim that there were wounded Palestinians and one Palestinian fatality. Following this incident, a military police investigation has been launched.”

It has become the norm in Israel to make people forget the violent crimes against Palestinians by turning them to investigations in court. Since the creation of the occupation state, the Israeli judicial system has never achieved justice for the Palestinians. Israeli criminals, whether judges in courts approving racist laws and confiscating rights, army or police officers killing Palestinians, or politicians taking decisions on wars, they are perpetually and continuously cleared of their crimes.

“Riots” and “rioters” are the pretexts that the Israeli occupation police and army officers cite when they want to justify violent crackdowns on Palestinian schoolchildren or peaceful protestors, or when they shoot at the Palestinian farmers and shepherds who attempt to face off Israeli settlers who attack them. They also use the pretext of imposing order and enforcing the law when they shoot at unarmed Palestinians who attempt to protect their trees from being uprooted or their homes from being demolished by the Israeli occupation.

Speaking to AP, Malik’s father expressed that his family had been the victims of injustice twice – firstly, when the boy was shot, and secondly, when the investigation was closed. “When my son was shot, the members of the investigative unit came to the hospital. They were about to cry. They told me, ‘don’t worry, those responsible for shooting him will be held accountable,'” he recounted. “But ten months after investigating, they decided to close the file.”

In May of this year, an Israeli Border Police officer shot eight bullets at Eyad Hallaq, a 32-year-old autistic Palestinian, when he was on his way to school. It is no surprise that in October, the Israeli Justice Ministry’s Police Internal Investigations Department announced that the Israeli killer would only be tried for reckless manslaughter.

Responding to this recommendation, Adalah, the Legal Center for Arab Minority Rights in Israel conveyed: “We once again bear witness to Israel’s shocking and disgraceful attempt to whitewash the killing of an innocent Palestinian man by Israeli police. Israel’s law enforcement system is concerned with protecting those who kill Palestinians. As long as Israeli authorities maintain the racist perspective according to which all Palestinians are perceived as enemies, the consequences will remain the same.”

There are countless similar cases of the Israeli occupation killing not only lone Palestinian civilians, but tens of hundreds, and then being cleared of any wrongdoing, as occurred in Jenin in 2002 and in Gaza during several major offensives between 2008 and 2014. We do not, and will not, forget the brutal massacres carried out in 1947, 1948, 1956, and so on.

Regarding Eyad’s case, as usual, the United Nations’ Office of the High Commissioner for Human Rights (OHCHR) performed its role, calling Eyad’s killing another case of: “The routine use of lethal force by Israeli Security forces against Palestinians in Gaza and the West Bank, including East Jerusalem.”

Israeli Public Security Minister Amir Ohana has defended the police officer, claiming he was simply doing his best to impose order in the tense atmosphere of Jerusalem’s Old City.

Human Rights Watch said in 2010 that Israel had failed to demonstrate that it will conduct thorough and impartial investigations into alleged laws of war violations regarding Israeli war crimes committed in Gaza between 2008 and 2009. Israeli rights group B’Tselem described the Israeli military law enforcement system as a fig leaf used as a whitewash mechanism.

It is not necessary for Israeli authorities to waste time, money and efforts on mock investigations, while findings are being predetermined prior to any probe. Meanwhile, Palestinians are waiting for justice from the oppressive, biased Israeli judicial system and from the international community which stands by while watching Israeli crimes being repeatedly committed against the Palestinians.