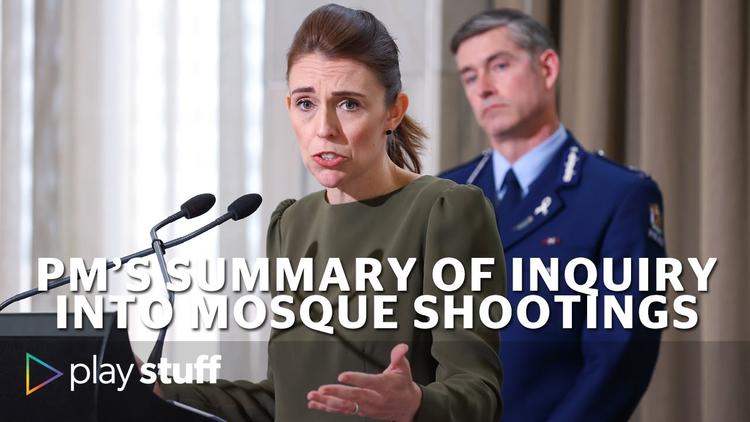 Ann Arbor (Informed Comment) – The Royal Commission of Inquiry into the Terrorist Attack on Christchurch Mosques on 15 March 2019 looked into the background of the white nationalist Australian young man who flew to Dunedin in 2017, stayed there in a sparsely furnished little apartment for eighteen months, and then went on a killing spree, killing 51 Muslim New Zealanders in mosque attacks. He was sold an assault weapon after being in the country only 3 months.

Prime Minister Jacinda Ardern addressed the nation in the wake of its release. She admitted that security resources was overwhelmingly dedicated to monitoring Muslims, in the absence of any real evidence that the some 50,000 Muslims in the country actually posed any threat. At the same time, white supremacists and other hate groups received relatively little attention. She also noted deficiencies in the firearms licensing system. She affirmed that all those who call New Zealand home should be safe, obviously including the country’s small Muslim minority.

Ardern highlighted the following passage in the report.

“The individual claimed that he was not a frequent commenter on extreme right-wing sites and that YouTube was, for him, a far more significant source of information and inspiration. Although he did frequent extreme right-wing discussion boards such as those on 4chan and 8chan, the evidence we have seen is indicative of more substantial use of YouTube and is therefore consistent with what he told us.”

She said she intended to bring this matter up with Alphabet officials, the parent company of YouTube and Google.

I know it is only anecdotal, but I have noticed that any time YouTube is on auto-play, it fairly quickly goes dark places. You rapidly end up with Alex Jones or some Islamophobic jerk ranting, or a Muslim extremist screed. In fact, I used to turn off autoplay when I embedded YouTube videos here on my site, but then the company took away that option. So my advice is that if you watch a video I choose for you, turn it off quick when it ends.

That there is something sinister about the YouTube algorithm is controversial. A recent paper presented at the Association for Computing Machinery found evidence for the thesis, especially if you look at the viewer comments. Another study at Penn, however, did not find radicalization.

In my view, Google saves money by turning key decisions on content over to robots, and this is irresponsible.

The report has other things to say about the perpetrator’s social media habits:

“In 2017, the individual joined The Lads Society’s Facebook group, having changed his username to “Barry Harry Tarry”. Later, he joined The Lads Society Season Two Facebook page, which was a private group. He made his first post on 19 September 2017. He was an active contributor, posting on topics related to issues occurring in Europe, New Zealand and his own life, far right memes, media articles, YouTube links (many of which have since been removed for breaching YouTube’s content agreements), and posts about people who were either for or against his views. He also encouraged others to donate to Martin Sellner, a far right Austrian politician. Two sets of comments warrant particular mention.

In early February 2018, the individual (under the Barry Harry Tarry username) engaged in online discussion with members of The Lads Society Season Two Facebook group about Mein Kampf. In particular, they discussed Hitler’s suggestion that grievance should be the focus of propaganda, “galvanising” those who see themselves as persecuted and “drawing in new sympathisers”. The individual commented:

“Agreed, it is far better to be the oppressed than the oppressor, the defender than the attacker and the political victim rather than the political attacker. Though 1920’s Germany was a very different time to now and we face a very different enemy. Our greatest threat is the non-violent, high fertility, high social cohesion immigrants. They will boil the frogs slowly and by the time our people have enough galvanising force to commit the political and social change necessary for survival, the demographics in my opinion will have shifted so harshly that we would likely never recover . . . What I am saying is that we can’t be a violent group, not now. But without violence I am not certain if there will be any victory possible at all.”

The report notes that his statement “we can’t be a violent group” was made at a time he was already plotting violence, so this phrase was likely intended to throw off any law enforcement officers watching the site.

Facebook has been a major enabler of extremism, and has admitted that the platform was used to incite genocide against the Rohingya Muslims in Buddhist Myanmar (Burma).

Prime Minister Arden and the report both stressed the need to create more social cohesion in New Zealand to to promote tolerance of diversity. It is striking that the Commission report spoke this way:

“At the heart of our inquiry were whānau of the 51 shuhada, and the survivors and witnesses of the terrorist attack and their whānau. Connecting with Muslim communities was an expectation in our Terms of Reference, but it was also the right thing to do. We gained valuable insights in this way.”

This is remarkable diction. Whanau in Maori roughly means kin or extended family, i.e. clan (cognate to ‘ohana in Hawaiian). Shuhada is the Muslim word for “martyrs.” The report begins by seeing the Muslim families in New Zealand as mirroring Maori clans, naturalizing them into the Polynesian country. Then it unselfconsciously incorporates the Muslim community’s own terminology about those killed, as martyrs deserving of paradise who died for their faith. I don’t think I’ve ever seen Maori and Arabic juxtaposed in this way, and it is a language of generous inclusivity.

Of the little over 5 million New Zealanders, nearly half say they have no religion. Some 38% are believing Christians. Hindus comprise 2.7%, Muslims are 1.3% and Buddhists are 1.1%. People following Maori religious and philosophical ideas are also 1.1%. (Most Maoris follow one of two forms of Christianity that are influenced by their Polynesian background). New Zealand was part of the British Empire, which included the Indian subcontinent, so it has a small but significant South Asian immigrant community, and I think most Muslims are of that description. Almost all New Zealanders say they would be OK with living next to someone of a different religion (in the US, large percentages are not all right with this).

The percentage of New Zealanders who practice a non-Christian religion is expected to double by 2050 because of immigration and high birth rates among the immigrants. But I figure that would only take them to 12 percent of the population. And, who knows, the next generation could end up as unchurched as most New Zealanders of Christian heritage.